Without Remorse is a standard issue revenge action flick

Stefano Sollima directs this screenplay by Taylor Sheridan and Will Staples based on the Tom Clancy novel of the same name. In Syria, Navy SEAL John Clark (Michael B. Jordan) and his elite team rescue a CIA operative taken hostage by Russian ex-military forces. A few months later, in apparent retaliation, a squad of Russian assassins comes after Clark and murders his wife, Pam (Lauren London), driving the highly trained soldier to seek revenge. What Clark uncovers, however, is an international conspiracy that could engulf the U.S. and Russia in an all-out war. This is the first of a two-part series, with Rainbow Six to follow. (109 min.) 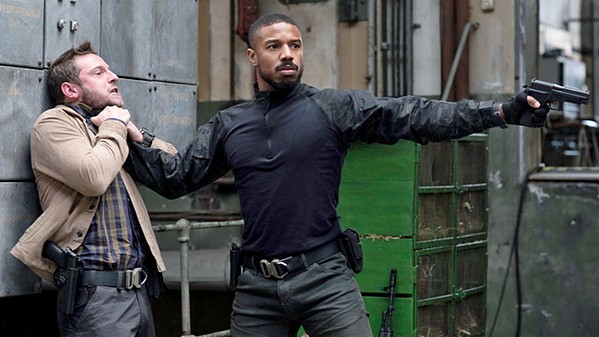 Glen This film has the right ingredients. Stefano Sollima (Gomorrah, Sicaro: Day of the Soldado) has proven himself adept at directing gritty action. Novelist Tom Clancy (The Hunt for Red October, Patriot Games) regularly supplies Hollywood with compelling source material. Screenwriter Taylor Sheridan (Hell or Highwater, Wind River) knows how to put together a propulsive story. Stars Michael B. Jordan, Jamie Bell, Guy Pearce, and relative unknown Jodie Turner-Smith turn in solid performances. So why does this film feel so flat? Clancy's novel was released in 1993, so perhaps it feels a little dated. Russian villains seems so ... I don't know, Cold War era? The story is also remarkably simple. Man kills a bunch of bad guys, associates of bad guys kill man's wife, man tortures and murders Russian ambassador for info about one bad guy who escapes, man goes to prison, man finds a way out of prison, man seeks revenge. Sure, there are a few side deals happening, like Bell's sleazy CIA operative Robert Ritter, who seems to have some ulterior motives going on, but where the film is going and whether or not it will get there are never in doubt. If you have Amazon Prime, it's free with your subscription, so why not watch? If you don't have Amazon Prime, there's nothing remarkable enough about the film to warrant signing up for it now.

Anna I'm all for a gripping revenge flick, and while Without Remorse ticks a lot of boxes in that genre, it's certainly not one I'll be revisiting when I need to see a bereaved lover exact revenge on his enemies. It's got plenty of action. There is no shortage of bullets flying and bad guys fleeing, but at no point did I feel like the film had anything novel to offer—which is fine. Not every movie can be solid gold from start to finish. It's already paid for as part of our Amazon Prime subscription, so why not spend a couple of hours giving it a chance? I may even venture to say it would be worth a Redbox grab if you see it there, but beyond that I'm out. I loved both Hell or Highwater and Wind River, but to tell you the truth I wouldn't have guessed this flick came from the same screenwriter. It lacks a lot compared to those films, and it feels pretty hollow beyond the guise of John's mission to destroy those who destroyed his life. That said, Jordan is good here—he's a sympathetic character and a certified badass as is Turner-Smith's character Karen Greer. The two work well together; they just aren't given a whole lot to work with.

Glen In Sheridan's defense, he's adapting Clancy's story, so there's only so much he can do. I love Clancy's Jack Ryan stories, and John Clark is a character in the Jack Ryan universe, so I thought I'd like this film a lot more than I did. Turner-Smith definitely helped keep my interest. Her Karen Greer is a Navy SEAL and also the daughter of Adm. Greer (played by James Earl Jones in The Hunt for Red October, Patriot Games, and Clear and Present Danger), who's Jack Ryan's boss at the CIA. The John Clark character actually appears in the Jack Ryan film The Sum of All Fears, played by Liev Schreiber. I can't fault Jordan. He comes off as a credible special ops soldier. I think it comes down to a flat, predictable story. This is supposed to be the first of a two-film series, and I'll definitely give the next one a chance, but unlike most of the Jack Ryan films, I doubt I'll be revisiting Without Remorse.

Anna I didn't realize that all these stories connect. I've certainly heard of Tom Clancy but didn't realize the scope of the universe he has created and how many of those characters have ended up in movie scripts. It's a tough film to rate because while I don't necessarily endorse it, I also can't say I hated it; it was simply underwhelming. This pandemic has upped a lot of people's viewing hours, and we are no exception. Sometimes it feels like we've watched everything out there, so I'm not going to pooh-pooh a new film, even if it doesn't quite hit the mark. If you already have Amazon and need some action on the screen, this just might hold you over until the next big action movie comes out. Otherwise, you won't miss much if you decide to skip it. Δ