Witness the finest in karaoke on Aug. 1 at SLO Brew! 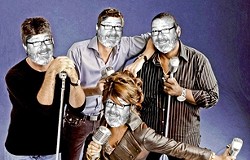 If you could be an American Idol judge, would you be an asshole like Simon Cowell, a ditz like Paula Abdul, or a cheerleader like Randy Jackson? That’s the thorny issue I’m facing as I prepare to co-judge the fifth annual SLO Brew Karaoke Contest, where one lucky winner will walk off with five Benjamins, baby! Hard. Cold. Cash!

The event’s Ryan Seacrest will be none other than Central Coast karaoke celebrity Brotha “C.” In addition to yours truly, the other judges are Jeff and Jeremy from KZOZ’s (93.3FM) Jeff and Jeremy in the Morning, and Suzanne Schonig from American General Media and The Krush (92.5FM). All three disc jockeys work Monday through Friday from 6 to 10 a.m., and they’re expected to be funny, cheerful, and interesting at that hour. I do not envy them.

I did karaoke once. We were at Harry’s in Pismo, and I sang Johnny Cash’s “Ring of Fire,” and I kept changing the words to “dick of fire,” and the guy running the karaoke machine was pissed! Apparently, people take their karaoke seriously. Aside from that, most of my karaoke experience comes from movies like The 40-Year-Old Virgin, Duets, and Lost In Translation … and from walking out of bars when karaoke starts. I may not be the right guy for this job, but I was promised free drinks.

The process is surprisingly complicated. SLO Brew’s General Manager, Monte Schaller, sent me an email all about it. Performers need to have three songs prepared, and they can’t be duets or original songs.

“Participant selection begins the night of the event at 7:30 p.m. sharp,” Monte wrote. “All who attend the event will get a ticket upon entering the event for submitting to perform; however, attendees will be able to enter a friend’s name on his or her behalf if they don’t want to perform themselves. That means, bring the most friends to help support you, then have the best chance of being chosen to participate! It’s all about the odds! 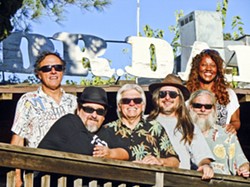 “Fifteen will be selected to perform in Round 1,” Monte continued, “and then that will be narrowed down to five for Round 2. But wait; there’s more! We will draw a bonus name after Round 1 from the hat at random to be added as an automatic second round contestant! That means if you don’t get chosen in the original first 15, you still have a chance to make it as the sixth finalist, so don’t leave early!

“And to make that even more fun, for every purchase you make from our American Born Moonshine sponsor at the bar during Round 1, you also get additional tickets to put into the hat to increase your chances to get chosen for the sixth spot in Round 2,” Monte added. “Round 3 will consist of two finalists battling head to head for the $500 prize and Karaoke Champion of the world!”

Did you hear that? The world! The freakin’ world! I’m going to figure the somewhat snarky repertoire of Jeff and Jeremy will lead them to the Simon Cowell position, and as the only lovely lady of the group, I’m guessing Suzanne Schonig will be our Paula Abdul, which means I’m Randy Jackson. Wow, I’m the nice one! Sweet! My wife will never believe it. Hope to see all you SLO Idols this Friday, Aug. 1 (7:30 p.m.; all ages; $3).

And while we’re on the subject, also at SLO Brew this week are rising country stars, The Josh Abbott Band on Saturday, Aug. 2 (7:30 p.m.; 21-and-older; $15 presale or $17 at the door). Their most recent album, She’s Like Texas, is an emotional rollercoaster.

“The most important idea that I write songs with is that they’re autobiographical,” Abbott said in promotional materials. “Nearly every song I write is a true story of mine, or of someone I know.” 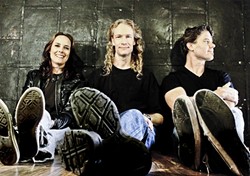 Abbott’s songs are frequently about relationships and “small-town lessons,” which he sings in “a dusty, masculine tone,” though he tries to understand the female perspective.

“In order for the female audience base to really embrace you, you have to do one of two things: You have to either flatter them or empower them,” Abbott said. “The empowerment comes from other girls, other lead singers, such as Miranda Lambert and Carrie Underwood, who kind of make girls feel like they’re stronger than the man—the if-you-can-do-it-then-I-can-do-it-too kind of songs. I go the other direction, and I try to flatter them. When women come to our shows and they hear the songs, I like to think that they feel like we’re kind of makin’ ’em feel special.”

Truxton Mile will open the show.

Blues by the best

From the opening ting-ting-ting of the cymbal to the walking bass line to the crisp guitar work and dancing piano of “All Night Long”—the opening track on Dr. Danger’s new album Second Opinion—you know you’re in the hands of master blues players.

There’s a reason these players have racked up two Newties for Best Blues or R&B Song from the New Times Music Awards (2011 and 2012)—they rip up the blues in an authentic and playful way.

With vocals by both bandleader Brad Kyle as well as soul sister Linda Lucille, not to mention add-ins from a couple other members, the group has a lot of sonic texture. Linda sounds great on Ike Turner’s “Mind in a Whirl,” one of just two covers (the other being “I Heard it Through the Grapevine”) in this otherwise all-original album with most tracks written by Kyle, but a couple by piano-man Brent Dannells and a Kyle/Lucille co-write. 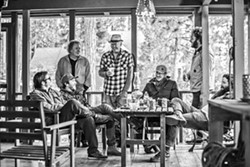 Steeped in blues traditions, many of the original songs fit right into the blues canon. Dannells’ NOLA-drenched “Come On in the Gumbo” finds Dr. Danger’s sound deep in the South, for instance, but the band has also taken forays outside the blues tradition: “Sweet Mary Jane” has a honky-tonk gait that’ll have you toe tapping along. Touches of Chicago and Texas blues can be heard as well as Americana and Motown.

Now in their seventh year, the band sounds better than ever. Get your blues on! 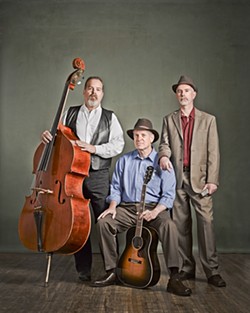 World-class guitar shredder Travis Larson has been written up in Guitar Player Magazine and Progressive Magazine, among others. Clearly influenced by Steve Morse, Larson just rips it on guitar. If you want to get a taste of the Travis Larson Band up close and personal, they’ll be at Frog and Peach this Thursday, July 31 (8:30 p.m.; 21-and-older), where you can witness the nimble fingers of this local guitar god.

Singer-songwriter Craig Kincaid will play the next Noontime Downtown Brown Bag Concert this Friday, Aug. 1, in Wilson Hall of the First Presbyterian Church of SLO (corner of Marsh and Morro; noon; free!) Kincaid is a noted musician and recording artist as well as an often-exhibited photographer who’ll play his original material.

Feeling funky? Want to get funky? Then head to Castoro Cellars this Saturday, Aug. 2, from 6 to 9:30 p.m. for Hot Summer Soul, a three band show featuring Bobby Santa Cruz with Jimi Macon (of the Gap Band), Burning James and the Funky Flames, and The Strata-Tones ($18 presale at castorocellars.com or $22 at the gate). That’s a whole lotta funk and blues coming your way, and Chef Phil of Bon Temps Creole Café will also have a Cajun dinner available for an additional purchase. Sounds like a hot summer night of fun!

Unfinished Business presents A ’60s America Rock and Soul Review this Saturday, Aug. 2, from 7 to 10 p.m. in Marie Callender’s downstairs banquet room. The show celebrates the rock and soul music of the 1960s, with songs by the likes of Beach Boys, Lovin’ Spoonful, Dick Dale & The Deltones, Roy Orbison, The Byrds, and many, many more. The cover’s $19 at the door.

Mighty Mississippi is heading our way for two shows of their toe-tapping acoustic blues and Americana this week: On Saturday, Aug. 2, they play Broken Earth Winery, in Paso Robles, from 1 to 4 p.m. (free!); then on Sunday, Aug. 3, see them at the Otter Rock Café, in Morro Bay, from 7 to 10 p.m. (also free!). This popular acoustic blues trio from the San Francisco Bay Area delivers “a spoonful of Southern comfort that harkens to the bygone days of juke joints playing blues on hot summer nights. From classics to original compositions, the music is raw and unplugged, with heartfelt lyrics; the way the Blues was born,” according to the band.

The Alex Miller Band continues its 2014 Guitarface tour with a stop at Linnaea’s Café on Wednesday, Aug. 5, from 7 to 9 p.m. Miller currently resides in San Francisco and is on the road this summer with his acoustic gypsy jazz group (Reno’s Jordan Keach on upright bass, San Francisco’s Conrad Seeto on guitar, and David Boyden on violin). “The Alex Miller Band plays fiery, danceable acoustic sounds rooted in the French/Gypsy Django Reinhardt tradition, touching on Brazilian rhythms and musette waltz, and featuring original compositions, standards, and folk tunes,” according to his press release.
L.A.-based indie power trio Rubberneck Lions play the Frog and Peach this Wednesday, Aug. 6. They’ve been compared to Band of Skulls, Arctic Monkeys, Wolfmother, The Black Keys, and even Nirvana and the Doors (10 p.m.; 21-and-older; free). ∆