Sitting at opposite sides of a courtroom counsel's table, Paul and Ruben Flores stare ahead at the San Luis Obispo County Superior Court bench, their expressionless faces partially covered by masks.

SLO County Deputy District Attorney Chris Peuvrelle steps in front of them at around 10 a.m. on Aug. 3 and places down an image of a young woman, who's projected onto a screen for the courtroom to see. 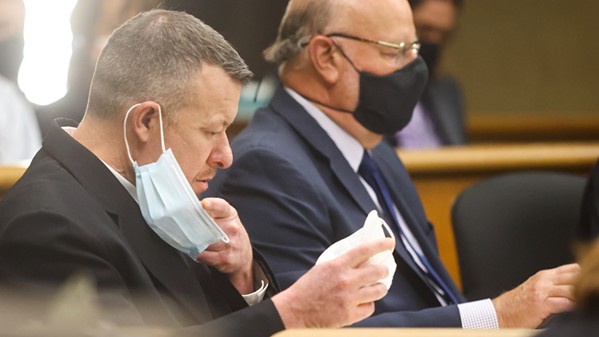 "Do you recognize this person?" Peurvrelle asks his first witness of the day, who's on the stand.

"That's Kristin. That's Kristin Smart," answers Steven Flemming, a former dormmate and friend of Smart's at Cal Poly in 1996, the year when the then-19-year-old freshman disappeared.

As the half-full courtroom stares at the image, Paul, 44, and his father, Ruben, 80, don't react—their gazes steadfast. The son and father are accused of first-degree murder and accessory to murder, respectively, in the 25-year-old disappearance of Smart.

It's the second day of preliminary hearings in the case—a court proceeding that's expected to last 12 or more days. During the all-day hearings, witnesses and evidence are presented to presiding Judge Craig van Rooyen. The prosecution, led by Peuvrelle, is trying to show probable cause for a trial, while the defense, led by Paul's lead defense attorney, David Sanger, raises objections and presents alternative evidence.

According to the allegations submitted by the SLO County DA's Office, Paul murdered Smart in his Cal Poly dorm room in the midst of a rape or attempted rape on May 24, 1996, after the two freshmen walked home late at night from a party. Ruben is accused of helping Paul conceal Smart's body, burying her under his Arroyo Grande deck for more than two decades, before her remains were recently relocated to an unknown location.

Both defendants are pleading not guilty.

Flemming, Smart's former dormmate, took the stand all morning on Aug. 3 as Peuvrelle and Sanger peppered him with questions. Flemming described Smart as a mature 19-year-old who was "a kind person" and "saw the world differently."

Flemming said he would see Paul "lurking" in the Muir Hall dorm, where Flemming and Smart (but not Paul) lived during their freshman year. Describing him as "weird" and "creepy," he said he observed Paul inside Smart's dorm room five or six times.

"He was not welcome," Flemming said. "Everyone knew Paul was creepy. She was uncomfortable."

Sanger and the Flores defense team contrasted Flemming's testimony on Aug. 3 with statements he made to the FBI in 1999 indicating he wasn't certain he saw Paul in Smart's room. Flemming held firm in his response on Aug. 3.

"Everything's brought back memories," Flemming said. "I do recognize Paul. Paul was in Kristin's room."

When the hearing broke for lunch, New Times overheard members of the Flores defense team speaking in the court lobby areas. One person said that the DA's Office "had nothing" without Smart's body.

The prosecution is expected to show that human blood and other evidence was found in the soil under Ruben's deck, where Smart is believed to have been buried for decades.

In addition to Flemming, several other witnesses were called to the stand in the three hearings that took place before press time. They included: Smart's parents, Stan and Denise Smart; attendees of the house party that Smart and Paul attended on May 23 and 24; and current and former police detectives who investigated the case. Δ