A 43-year-old Paso Robles woman facing felony charges for neglecting to care for horses in the California Valley was previously charged with animal endangerment for leaving a dog in a car, according to court records.

On July 25, the SLO County Sheriff's Office announced that it had completed an animal neglect case against former California Valley Community Services District board member Misty Marie Lambert, and seized 11 horses from a Cal Valley property were she was keeping them. 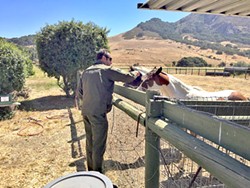 According to sheriff's officials, the horses on the property, located in the 14000 block of Arvin Trail, were left without adequate food or water for periods as long as six days in temperatures of more than 100 degrees. A colt on the property had been attacked multiple times by a dog, investigators said. The colt's untreated wounds were so severe that it had to be euthanized. Photos showed the animal on its side in the dust with what appeared to be a large bite wound on one if its rear legs.

Court records show that Lambert was charged with one count of misdemeanor animal endangerment in 2014. According to the complaint, Lambert left a dog unattended in a vehicle under conditions that endangered the animal's health. Lambert was fined $150 in connection with that case.

In addition to the animal-related cases, Lambert was one of two Cal Valley CSD directors the SLO County District Attorney's Office charged with election fraud in the fall of 2016. The charges against Lambert and her fellow CSD director, Lisa Marrone, were eventually dismissed.