Editor's note: New Times chose not to use the alleged victim's full name to protect her privacy.

On a day in late December 2017, then Paso Robles Police Sgt. Christopher McGuire ushered city resident J.G. from her home to her detached garage, and allegedly asked her to lock the door behind her. 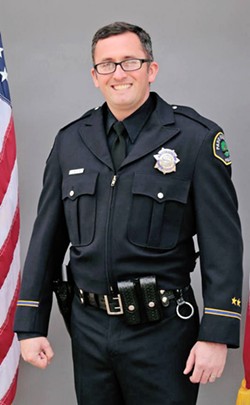 Afraid, J.G. obeyed and reportedly asked him what they were there to talk about.

J.G. knew McGuire from a few nights before. On Dec. 19, 2017, he was one of several officers who'd responded to her home in a 911 domestic violence call that resulted in her boyfriend's arrest.

That night, after the other officers had left, a uniformed and armed McGuire lingered for hours, according to allegations in a federal lawsuit. At one point, McGuire allegedly ordered J.G. to hug him and then forced her hand onto his penis.

"McGuire then asked which gun she preferred," the lawsuit alleges. "McGuire directed [her] to tell him what she would do with his 'big cock.'"

McGuire left her house late that night, but he returned a few days later to conduct an unexpected "welfare check" on his way to work.

Inside her locked garage, McGuire allegedly "pulled down his shorts and attempted to physically force [J.G.] onto her knees to perform oral sex." J.G. tried to resist, the suit claims, and then the sergeant raped her. Investigators would later match the semen left on her garage floor with McGuire's DNA.

These alleged events are just the start of a months-long story of abuse detailed in the May 27 lawsuit filed in the U.S. District Court for the Central District of California. J.G.'s complaint seeks civil damages from McGuire and the city of Paso Robles for sexual battery and harassment, stalking, civil rights violations, and negligence.

J.G. and her attorneys filed the lawsuit after the SLO County District Attorney's Office declined to file criminal charges against McGuire following a 2018 investigation, during which McGuire resigned from the department. In 2019, the city of Paso Robles dismissed J.G.'s administrative claim for damages, arguing it was filed after a mandatory six-month window.

But J.G.'s attorneys are arguing in federal court that her claim is still valid—that the trauma inflicted against her by local law enforcement and the justice system were what caused her delay.

A federal judge agreed that J.G. deserved a trial and denied the defendants' motion to dismiss the case for lack of timeliness. It will go in front of a jury next summer.

The allegations against McGuire and the Paso Robles Police Department span nearly a year. In court filings, McGuire denied all guilt, stating he's never sexually assaulted or harassed "any woman at any time."

After the alleged rape in J.G.'s garage in December 2017, McGuire reportedly stalked and harassed her for months while on duty.

According to the lawsuit, McGuire repeatedly threatened to harm her and take her children away if she told anyone about the incident, harassing her in public places and routinely driving by her house in his patrol vehicle.

The harassment eventually caused J.G. to change residences, the lawsuit says. Afterward, in April 2018, an on-duty McGuire pulled J.G. over while she was in her car with her daughter and allegedly demanded she give him her new address.

"McGuire said he was angry because he had heard that [J.G.] told someone about his assaults and harassment," the lawsuit states. "McGuire then threatened to call Child Protective Services and report [her] and have her kids taken away from her if she did not keep her mouth shut."

According to the allegations, McGuire then followed J.G. in his police car to her new home and ordered her to the bedroom. After he allegedly attempted to force oral sex and rape her, the lawsuit states that she "fought back and began screaming." Upon leaving, the lawsuit says McGuire told her to "call the police department every Wednesday and leave a message for him."

"This was done for the purpose of intimidating her into not reporting his sexual assaults and sexual harassment of her," the lawsuit alleges. "[J.G.] was terrified of McGuire and what he could do to her with his authority as an officer of the law."

In May 2018, J.G. reported McGuire's conduct to the Santa Cruz Police Department, which kicked off an internal investigation at the Paso Robles Police Department, according to the lawsuit. McGuire went on paid administrative leave that month.

According to the lawsuit, the sheriff's final investigation found that McGuire had sexually harassed or assaulted multiple women in Paso Robles. In one alleged incident in 2015, "McGuire directed a female civilian to 'flash' her breasts" to make an arrest "go away." The investigation also allegedly found that "McGuire routinely engaged in sexual intercourse and oral sex with other women while he worked his regular patrol shift."

Despite the Sheriff's Office recommending felony charges for forcible sex acts, SLO County District Attorney Dan Dow announced on Nov. 1, 2018, that his office would not pursue the case against McGuire.

Citing a lack of evidence of nonconsensual sexual contact, Dow said "no reasonable and objective jury could find Mr. McGuire guilty of the alleged crimes."

According to her lawsuit, DA Dow's decision delivered J.G. a "devastating blow" and further challenged her ability to file a timely claim for damages.

"Processing the fact that McGuire had gotten away with raping her, it is reasonable that [J.G.] ... would need some time before initiating a civil claim against McGuire," the lawsuit states. Δ