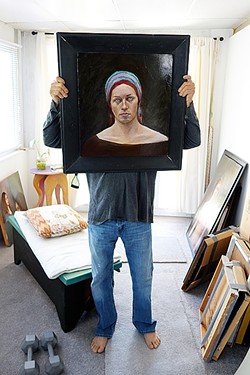 A while ago, I modeled for a portrait show David did of his male friends, of whom I count myself lucky to be one. At the time I asked him why he didn’t paint women’s portraits, and his short answer was he couldn’t paint them well enough to satisfy the models, which true to form seems to disparage both David’s painting abilities and women’s vanity. Two-fer!

For his men’s show, David painted more than 40 male portraits, all from life, but his female models often weren’t able to sit for the two or three multi-hour sessions needed.

The solution: He took photos and worked from them, knowing he’d be better able to capture his models’ essence. Even with this concession, he still wasn’t able to fill the Steynberg Gallery with female portraiture, so he augmented the show with some recent nude figure paintings he’d created as well as some new pen and ink drawings inspired by a documentary he saw called The Pyramid Code, a five-episode series that explores ancient Egypt’s temples and megalithic sites.

“They believe the sphinx is much older than the pyramids, maybe 10- or 20-thousand years old, and they also look at Egyptian matriarchal culture, such as Queen Hatshepsut, one of the most successful pharaohs. Because of her influence as a mother, Egypt flowered under her peaceful reign with more beautiful art, temples, and monuments,” David explains. “Of course, after her death the male priests destroyed every vestige of her reign, even breaking up statues and using the rubble in new construction. I thought, ‘Matriarch! That’s what we need.’ Everyone loves his or her mother. Even if you’re an asshole, you’d say, ‘Don’t say anything bad about my mother.’”

As we continue to visit, David waxes poetic about female energy and its ability to nurture and create harmony and cooperation, unlike patriarchy, which brings aggression and dominance. He pointed to the male-dominated Middle East and ISIS beheadings as the ultimate endgame of male domination.

“Women have positive energy, and being mothers they have a drive to protect their children, whereas men want to send children off to war,” David says. “But I think patriarchy is dying off in our culture and will be replaced by matriarchy.”

Since he’s a septuagenarian who’s given up drink and now practices yoga, I thought I’d throw him a softball question: “How long have you been interested in women, David?”

“All my life,” he says without hesitation. “I was 8 years old and pulling my little neighbor friend around the block in my wagon when her dress blew up and revealed her beautiful little legs. I was hooked, and I had a great mother—beautiful, nurturing, and self-sacrificing to a fault.” 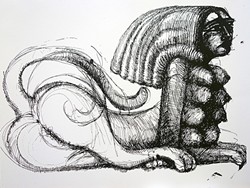 “I’ve also noticed in your ink drawings of the sphinx that early versions have two boobs but some have as many as eight. How many boobs is the correct number?” I ask (this is a serious question, people!).

“The more the better,” David responds without hesitation. “Everybody should have a boob to suck on. If there are 9 billion people in the world, there should be 18 billion boobs, that way if one runs out, there’s a spare right there.”

I’m no mathematician, but I think that means David would like a world with nothing but women.

“There was an early statue found in the Mediterranean, a pre-Greek statue of a pregnant, fat female form with 10 or 12 breasts—the maternal goddess honored as the source of all life,” recalls David in defense of his adoration of multiple mammary.

“Last question, David. How do you respond to critics who might claim you’re exploiting, not celebrating, femininity?”
I ask.

“Right now in the news, women are marching topless in the streets. Are women exploiting themselves? I don’t think so,” David says. “They’re seeking freedom and equality, and that’s why I think we’re heading toward matriarchy and the death of patriarchy.”

That’s a wisdom bomb I can get behind.