If all the women who work at New Times didn’t go to work on March 8 as part of the Day Without a Woman March, you wouldn’t be reading this article or the next one. You would be holding blank pieces of paper, as women make up the majority of the workforce at New Times.

Leaders of the Women’s March on Washington once again called for women and allies to march for equity, justice, and human rights on that day, International Women’s Day. They were called on to call in, take the day off, avoid shopping at certain establishments, and/or wear red in solidarity. 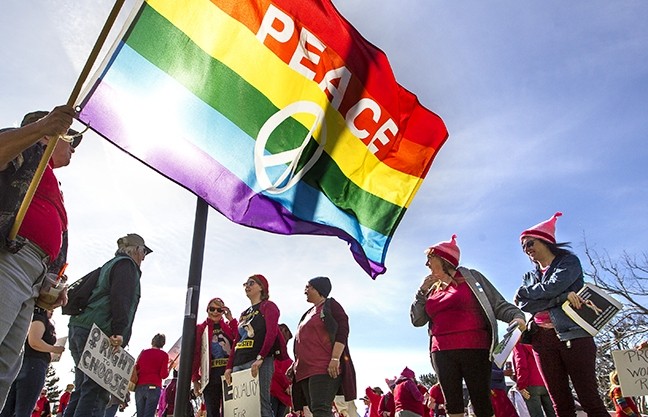 Not every female, though, had the privilege of taking the day off, according to Sarah Harwood, who woke up that morning, just like any other day, and went to work at Gus’s Grocery in San Luis Obispo.

“No matter how I feel and how supportive I am, not getting up and coming to work to make the rent at the end of the month, it just isn’t an option,” she said.

Harwood did participate in the Women’s March in San Luis Obispo on Jan. 21 and is still supportive of the cause—she sported a red bandana in her hair that day.

“There are so many other ways that we can support each other besides calling in sick,” she said, adding that she’s honored to work for a local deli that has been owned for almost 30 years by Ellen Stanton and encouraging residents to shop locally.

Just a few blocks away, women in red—some donning pink “pussy” hats—started to trickle in to Meadow Park, where the march would start.

It was organized by Debbie Gedayloo, a former teacher of illegal immigrant children and the daughter of a Muslim-raised nuclear physicist.

“I just think it’s important for us to be in public view, because for me this is about inviting conversation not yelling at the opposition or the opposition yelling back,” she said.

Among the peaceful supporters was Cris Smith, who drove down from Atascadero just as she did in January to support her fellow females during the Women’s March.

Smith said she is marching once again for all the women who don’t have the option of being heard.

“I’m proud to be a part of a larger group of people, even a global group that has a message for equality and justice,” she said.

As the crowd started to grow, Smith said the number of marchers wouldn’t compare to participators of the Women’s March because unlike her, many women still had to go to work.

On her way to teach students at the San Luis Obispo Classical Academy High School, Sarah Shotwell took a photo of herself in a red flannel and posted it on Instagram. In the caption, she wrote that she was not participating in the march but wore red to celebrate the future of women and the privilege that she has to work for and with intelligent women.

“While I see the meaning in it, I’m not striking today because I am the teacher of many intelligent, beautiful, capable young women, and I would find it counter-intuitive to stand in the way of their education on a day meant to promote the rise of women in the world,” the caption stated.

On March 7, county resident Greg Grewal voiced his opposition to the female movement during public comment at the SLO County Board of Supervisors meeting.

He told New Times in a phone interview that he’s a former LA city fireman and is surrounded by three successful females: his wife and two daughters. He said his wife is a surgical technician, one of his daughters is a commercial pilot and the other is a veterinarian. While he believes in equality for all, he doesn’t believe in women taking a day off from their jobs to prove a point.

Grewal said there are better ways to protest, and the march didn’t take into consideration all the people it would affect.

“If they didn’t show up to work, someone’s surgery would get canceled, people wouldn’t be able to fly on Delta, and someone’s animal could die,” he said.