Women's care: SLO County has only one abortion provider, and it's Planned Parenthood

In San Luis Obispo County there is only one health care provider where a woman can receive a safe and legal in-clinic abortion.

Planned Parenthood Central Coast in the city of SLO offers an in-clinic abortion for women up to 16 weeks pregnant or an abortion pill option for up to 10 weeks of pregnancy. In all other circumstances, women need to travel outside the county for the procedure. 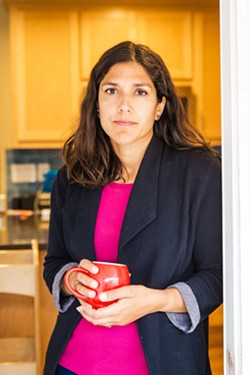 Ruzena Brar was 18 weeks pregnant when she made the decision to terminate her pregnancy because she had found out that her daughter would most likely not make it through the birth—and if she did, she might not make it through the first year of her life. It would have been her and her husband's third child. They already had two sons. Brar decided that if her child were to make it to term, she didn't want that baby to suffer, so with a lot of pain she decided on abortion.

"I knew some people did labor and delivery, but I knew I didn't want to do that. I couldn't imagine going through that to give birth to a dead baby," Brar said, her eyes filling with tears.

Brar was almost 15 weeks pregnant when she had gotten an ultrasound, a nuchal translucency—a sonographic prenatal screening scan to detect cardiovascular abnormalities in a fetus—and blood drawn.

"We didn't know it was a girl at the time, but with the ultrasound we could see her stretching her leg and moving. It was wonderful," Brar said.

She said the combined results and her age were put together to come up with a risk factor for Down syndrome and trisomy 18. Trisomy 18 is also known as Edwards syndrome. It's a condition that causes severe developmental delays due to an extra chromosome. The condition has no treatment and is usually fatal before birth or within the first year of life.

The doctor notified her that she had tested for a 1 in 14 chance for Down syndrome and 1 in 140 for trisomy 18. He recommended further tests. A week later she had another test. Days after that, Brar got a call that the initial results were positive for trisomy 18.

"I don't remember what she said after that," Brar said with a pause. "But I do remember that I said, 'I want to schedule a D&E as soon as possible.'"

When she called to check on her referral for the abortion, she was told it was pending to the Planned Parenthood in San Francisco.

"I support Planned Parenthood, and I think they do great work. I got my birth control pills from there when I first moved here. I just felt that I've also seen protesters outside of the one here, and I didn't want to have to go all the way to San Francisco, to a place that's not private and to face protesters there," she said.

Brar inquired about a referral closer to home that was a hospital.

"She was a really kind woman, and she was really helpful, but the exact words she said to me were: 'This is a small town and we don't want to be known for that.' For me [an abortion] was critical medical care," Brar said. "It made me feel like I was doing something illicit."

The woman on the other line did advocate on Brar's behalf for a referral to a hospital in Los Angeles. Brar's parents came down from Oregon to take care of her two sons while Brar and her husband drove south for the procedure.

Aside from her own research, Brar received a lot of answers through a support group she found online for women who had experienced or were going to experience an abortion. From there, she learned to ask for handprints and footprints of her little girl, and what questions to ask. Most importantly, though, she learned that she wasn't alone.

Brar said she thinks of her little girl every day but she stands by her decision. She said she advises other women who are debating a termination procedure to: Make the best decision they can with the information they have; know abortion can be a loving and compassionate choice; get support; know they may not be able to get the procedure they prefer; and understand that if their insurance doesn't cover termination they may be able to negotiate directly with the provider.

"We do everything that we can to create a safe environment, but the protesters have freedom of speech. They have the ability to stand outside of our health centers, which unfortunately sometimes includes harassing, judging, and shaming patients who are accessing personal and private health care services inside our doors," Tosh said.

Tosh said that 1 in 4 Americans who can get pregnant will have an abortion by the time they're 45. About half of all pregnancies in the United States each year are unintended, and 4 in 10 of these are ended by medically safe legal abortions.

"Which means that all different sorts of people of different ages and for different reasons experience abortion," she said.

Planned Parenthood is the only provider in San Luis Obispo County that provides termination procedures, but Tosh said she doesn't know why that is.

"I don't know that I can answer that. When I first moved to California from Central Florida, I was quite surprised actually that the access to abortion along the Central Coast was primarily through Planned Parenthood, because I think California sort of prides itself in being a reproductive health leader in the country," she said.

Recently, Tosh said Planned Parenthood has had an outpouring of support and outrage from patients and the community due to the recent discussions of limitations and barriers to accessing abortion services.

Several states in the U.S. are working to put barriers around women's access to abortion services. Louisiana recently passed a bill to ban abortions after a fetal heartbeat is detected, typically around six weeks. Georgia, Kentucky, Missouri, Mississippi, and Ohio also passed similar bills. Alabama legislators voted to ban abortions in nearly all circumstances, while Utah and Arkansas have limited the procedure to before the middle of the second trimester.

"It's outrageous that in 2019, an unprecedented number of extreme abortion bans are being enacted across the country. But while other states are working to dismantle access, California is working proactively to expand access," she said.

California Gov. Gavin Newsom proposed a budget that doubles funding for reproductive health to a record $100 million. As part of the investment, Planned Parenthood health centers and other health care providers will be able to reach more patients and increase services in underserved communities. Δ

Correction:  This article was edited on July 5 to correct one error. Planned Parenthood Central Coast offers an abortion pill option for up to 10 weeks of pregnancy.