The Women's Legacy Fund strives to serve the needs of women and girls within San Luis Obispo County through a permanent endowment. With that endowment, the organization works to ensure that there is support for women and girls not just today but into the future.

At the Sept. 27 annual Women's Legacy Fund luncheon, that mission held true. The fund awarded $65,000 in grants to RISE and People's Self-Help Housing and brought in keynote speaker Ted Bunch to talk about men and violence against females. 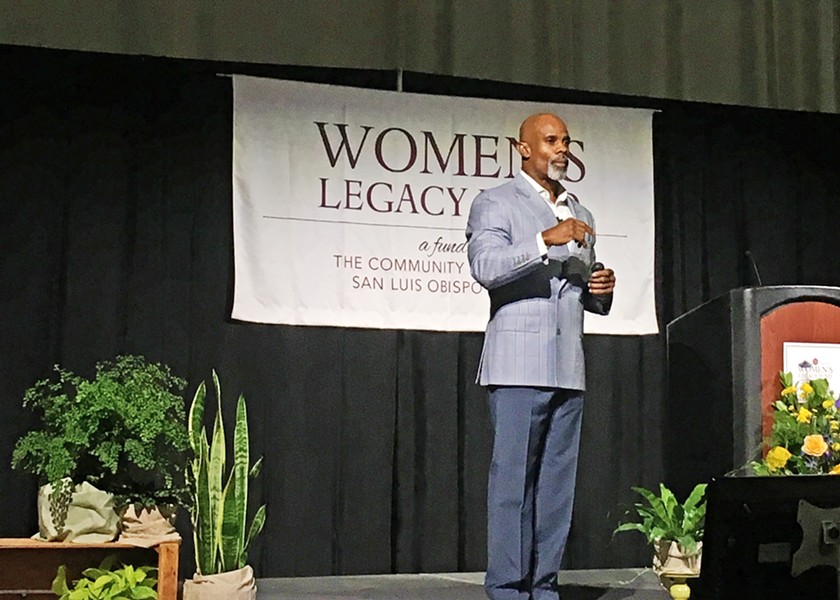 Bunch is the chief development officer of A Call to Men, a nonprofit violence prevention organization that educates men on the issues of manhood, male socialization, its intersection with violence, and preventing violence against all women and girls.

Changing the way that men think and interact with women, Bunch said, is one part of prevention of violence against women, sexual assault, harassment, and bullying.

Erin McCall, the communications and program associate for The Community Foundation of San Luis Obispo County (which holds the Legacy Fund's endowment), said Bunch was chosen as the keynote speaker because he continuously draws attention to an issue that looks into making positive changes for women and girls.

"This is not an effort that can be solely led and sustained by women. It must be an all-inclusive undertaking that calls upon our husbands, sons, friends, and neighbors to truly inspire the comprehensive change that must take place to create a safe place for women and girls to excel," McCall said.

Bunch opened his talk by sharing the nonprofit's vision: to create a world where all men and boys are loving and respectful and all women and girls are valued and safe.

"When we look at the #MeToo movement, this is an exciting time for our country. Men, I know it's scary because we're the first generation of men being held accountable for something men have always gotten away with," Bunch said.

With that, he said, this is also the first generation of men who can also be intentional about healthy and respectful manhood that values women, children, girls, and LGBTQ-plus individuals. Bunch makes it clear that the conversation is not an indictment on manhood; it's an invitation to men.

He said that men are taught to objectify women—something that has been passed down by generations of men. It's a way for men to prove their masculinity and to bond with one another.

One example he gave was that men are typically interested in women for sex: Take the scenario of two seniors in high school, a male and a female, who go out on a date to the movies, Bunch said.

Bunch said the reason for situations like that is the collective socialization of men, or what he calls the "Man Box." Men in the box are supposed to be powerful, dominating, fearless, in control, strong, emotionless, and successful. Women are objects in the box, the property of men, and have less value than men.

A Call to Men reaches out to males to help them break out of that box, he said—to value a woman's life, express a full range of emotion, and to not conform to pressure.

McCall from the Community Foundation said that San Luis Obispo County has many factors related to quality of life that distinguish it from other communities. Yet women in the county still experience sexual, domestic, and dating violence.

"When you consider the threat that violence against women poses, it becomes apparent it is a threat not only against women but directly attacking the quality of life this community is so proud to embody," she said.

She said Bunch offers a world-renowned message that is long overdue for the San Luis Obispo community.

"For the sake of each woman affected by violence, whether in the past or yet to come, we must recognize the urgency of this topic. The time to have the discussion is today," McCall said. Δ