Women's March SLO gears up for its annual demonstration

Women's March SLO's third march slated for Jan. 19 is supposed to be a reflection on 2018.

Local Women's March organizers chose Truth to Power as the theme for this year's march. Andrea Chmelik, communication director for the local chapter, said the concept comes from the understanding that there is nothing more important than knowing our truth and holding those in authority accountable. 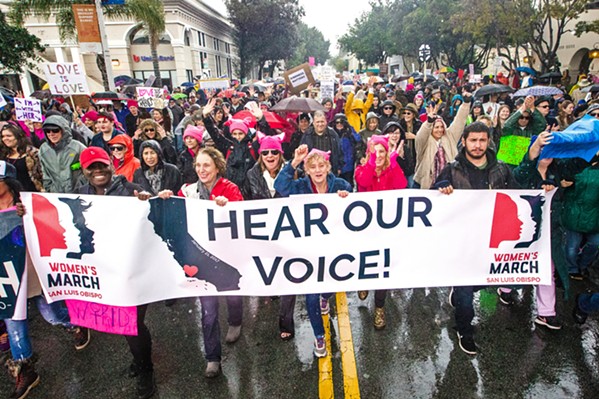 Last year's truths, she said, included the women who spoke against gymnastics national team doctor Larry Nassar, the journalists who have been under fire for reporting the facts, and all the victims of violence and assault who spoke out during the "why I didn't report" and "me too" actions.

"The Women's March movement began in 2016 as a vision of an America that is fair, just, and inclusive. The message still resonates," Chmelik told New Times.

In 2017, women gained seats in government, nationally and locally, a trend that continued in the 2018 midterm elections.

"Women are galvanized and more organized than ever, claiming their seat at the table," Addis said.

Chmelik said that while the spotlight on the movement is brightest during the annual marches, the real work is done in communities, and every community is facing different issues.

This year, there will be about 30 local organizations signed up to participate in the event's Call to Action Alley—a section of the march where groups set up informational booths.

"These local nonprofits work on many different issues in our area, from civil rights to LGBTQ rights to environmental justice and human traffic prevention—our goal is for people to connect with the organizations based on the issues they are most passionate about," Chmelik said.