San Luis Obispo police officers asked a local group of women to leave the Women's March SLO rally on Jan. 18 because their mission didn't align with that of the local Women's March chapter.

The women were part of the Central Coast Health Coalition, a regional group formed to advocate for consumer choice in health. 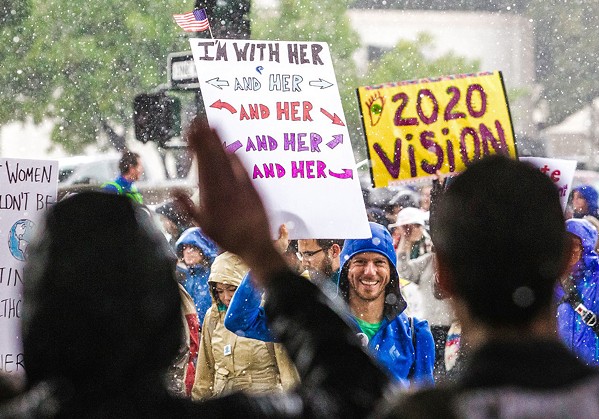 The signs, Dorfman said, are part of a movement created by Joshua Coleman—according to NBC News, Coleman has stated that a vaccine injury confined his son to a wheelchair. He's at the center of aggressive protests and actions against vaccinations.

Coalition members gathered at Mitchell Park on the morning of the event to participate in the rally when they were approached by the officers, Dorfman said.

"We were told by police, at the direction of Women's March organizers, to leave the park," Dorfman said.

Sara Semmes was also part of the group that was ushered out of the event.

Ahead of the Women's March SLO event, the group applied to have a booth at the "Time is Now Call to Action Alley"—where organizations and groups had informational booths. Dorfman said the group's application was originally approved but later rescinded.

On Dec. 26, 2019, Chmelik said, the local chapter responded to the coalition's request for clarification, "stating that Women's March SLO has concerns about the consequences of Central Coast Health Coalition's mission to public health and safety."

Part of the local chapter's mission, Chmelik said, is to work in solidarity to protect women's rights, human rights, our safety, our health, and our planet.

"While the Women's March SLO recognizes that many issues exist with the pharmaceutical industry, the movement to suppress the rate of vaccine use poses dangers to health and safety, and therefore does not align with Women's March SLO's focus," Chmelik said.

Central Coast Health Coalition members were moved to a space provided outside of the area permitted for the Jan. 18 event, across the street in front of Grace Church. They were able to participate in the march through downtown SLO.

"I think what they're missing here is they are shutting out mothers. What is more fundamental to women's rights than mothers' rights?" Semmes told New Times.

Semmes said she's frustrated. She said the group doesn't want to cause problems, but they're activists just like the other participants at the event.

"These are our causes, and this is what [Women's March SLO] is supposed to be celebrating. The hypocrisy of having us removed because we're not one of the sanctioned causes," she said. "They are out there trying to promote women being strong and having a voice, but at the same time, they're shutting down what they're not comfortable with."

Dorfman said she doesn't understand why the members of the Central Coast Health Coalition weren't able to participate in the rally. She said they understood the group wasn't allowed to have a booth but hadn't specifically been told they couldn't be a part of the rally.

There were about 10 to 12 coalition members, Dorfman said, carrying signs at the event. But she argues the signs and their messages followed the Women's March SLO policies.

According to the Women's March SLO website, the event is free and open to the public.

"Your signs are your personal expression of values you are fighting for," the policy states. "We respectfully ask that signs address your truth, and why #TheTimeIsNow to rise up." Δ