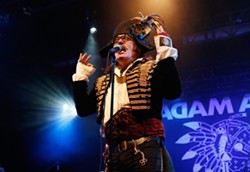 One of the most well-known faces of the ’80s, Adam Ant is a true pop icon. In October 1980, during the new romantic, post-punk, new wave era, millions of TV viewers in the UK saw the blazing performance on Top of the Pops by Adam and the Ants, and the phenomenon began. Adam’s life—and music—had changed a few years earlier, when the Sex Pistols played their first-ever gig, opening for his band Bazooka Joe.

Born Stuart Leslie Goddard in London in the 1950s, Adam has sold more than 40,000,000 albums. Once voted the sexiest man alive (must be those outlandish outfits and makeup!), he’s crowned music charts worldwide with massive hits including “Goody Two Shoes”, “Prince Charming,” “Stand and Deliver,” “Wonderful,” and “Room at the Top.” Globally, he once had eight singles in the Top 40 in one week! Nominated for a Grammy Award for best new artist in 1982, more recently he received the UK’s Q Music Icon Award alongside fellow recipients Paul McCartney and Brian Ferry. He’s acted in two dozen films and TV shows, and recently reactivated his musical career with sold-out 2012 USA and UK tours.

His latest album, Adam Ant is The Blueblack Hussar In Marrying The Gunner’s Daughter, has received critical acclaim from reviewers, who’ve called it “punchy and convincing” and “full of spit and vinaigrette … always entertaining;” raving that “he can still pull all the right moves.”

Adam Ant performs live at SLO Brew in downtown SLO on Wednesday, Sept. 18 (7 p.m., all ages, tickets $30 advance from Boo Boo Records or Vallitix outlets, $35 at the door). Don’t miss this one, people!

Mark your calendar for an exciting show set for Thursday, Sept. 19, when some of the top reggae artists in the world come to the Brew: Michael Rose with Sly and Robbie. Michael Rose, formerly of Black Uhuru, is known for his hardcore Jamaican music, and his trademark vocal and dancing style. Reggae’s best-known rhythm section, Sly and Robbie have played on or produced at least 200,000 songs since the 1970s. 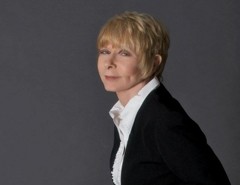 Nothing brings a community together the way live music does, especially when it’s performed in an inviting outdoor setting. Seems like just about every community up and down the Central Coast is getting in on the act, and now it’s A-Town’s turn to put itself on the musical map.

The ambitious, first-ever Creekside Folk Music Festival is set for Saturday, Sept. 14 in Atascadero’s historic colony district, along the creek near the distinctive city hall. Nine hours, nine stellar musical acts, all for just 15 bucks. Organizers are bringing together some of the area’s hottest musical talent for your listening pleasure.

First up, starting at noon, is Rob Kimball for a half-hour set. Known to his buddies as Little Robbie Kimball, he’s also the emcee for the event. Banjer Dan brings his banjo antics to the stage at 12:45 p.m. for a 45-minute set, followed by singer/songwriter Steve Key at 1:45 p.m., and The Grownups at 2:45 p.m. Father-daughter duo Ranchers for Peace deliver their politically charged harmonies starting at 3:45 p.m., then it’s BlueSouls at 4:45 p.m.

Santa Margarita’s own Jade Jackson will share her latest tunes with the crowd beginning at 5:45 p.m. She’s a New Times Music Award-winner from a couple of years ago—when she was still in high school—and this young singer and songwriter just keeps getting better and better.

First-place winner in the songwriter category in this year’s New Times Music Awards, Dulcie Taylor, takes the stage next. A recent transplant from the South who now makes her home in Atascadero, she’s already become a local favorite, with her soft drawl and down-home style. Dulcie Taylor with George Nauful is set to perform at 6:45 p.m.

The festival’s headliners are something of a local music supergroup whose members sound even better together than they do by themselves. Starting at 7:45 p.m., Kenny Blackwell, Dorian Michael, and Louie Ortega will dish up a lively gumbo of original tunes to close out the festival.

Tickets for the Creekside Folk Music Festival are available in advance at Boo Boo’s, the Barrel Room, and Wilkins’ Action Graphics. You can also get yours at the gate. Bring a chair or a blanket for seating. Plenty of food and beverages will be available, so there’s no need to bring your own. And organizers say ins-and-outs will be allowed, so you can take a break and wander around downtown if you’d like. The festival is put on by Atascadero Main Street, with proceeds going to purchase holiday decorations for downtown. You can get more info at facebook.com/atascaderomainstreet. Go, A-Town!

Morro Bay is no slouch when it comes to local music either, but folks there like to spice things up a bit. The annual Avocado and Margarita Festival is back, offering you chance to win a year’s supply of local avocados on Saturday, Sept. 14 and Sunday, Sept. 15. Along with a whole slew of creative recipes based on the magical green fruit, chased with some of the most delicious cactus-based concoctions you can imagine, the festival also features some great local music.

Kicking off the fun is Joey V and the Bringing Back Band at 11 a.m. on Saturday. The Lenny Blue Band pumps out some danceable tunes starting at 1:30 p.m. Headlining the festival’s first day, starting at 4 p.m., is another local music supergroup whose members are all fine performers in their own right: Bobby Santacruz and Al Shival with Jill Knight. Get ready for some funk!

The festival continues on Sunday, with Shameless performing at 11 a.m., and the Dave Miller Band at 1:30 p.m. Admission either day is only two bucks at the gate on the Embarcadero. Find out more at avomargfest.com.

And if you can’t stop dancing once you get your groove on, don’t forget about the Otter Rock Café just down the street, where owner and music lover Jaime always features fun live music. On Saturday, Sept. 14 at 8:30 p.m. is Miller Time Boogie and on Sunday, Sept. 15 at 4 p.m. it’s that father-son duo of guitar wizards, Billy and Charlie Foppiano.

A taste of Quebec 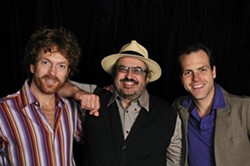 Quebec has its very own traditional folk music style, and no one interprets it better than Yves Lambert. This musical pioneer played with La Bottine Souriante and Le Bebert Orchestra, and now he’s pared down his band to a trio, with Oliver Rondeau and Tommy Gauthier.

Described as “a breath of fresh and happy air on the musical Quebecer scene,” Yves Lambert creates a memorable musical experience. In fact, at the recent Beaverstock music festival at Castoro Cellars, clawhammer banjo player Leonard Podolak told the crowd that Yves Lambert is his hero who has taught him “so much,” including a song that brought the cheering crowd to their feet.

Now, SLOfolks is bringing the dynamic Yves Lambert Trio to Castoro Cellars on Saturday, Sept. 14 at 7 p.m. Tickets for the show are $22, available at Boo Boo Records and at the venue. A catered dinner by Dining with Andre is available for purchase at 6 p.m. The nonprofit group’s website, SLOfolks.org, has more information.

Grover Beach has its own musical gathering, too. Now in its tenth year, the free weekly Sizzlin’ Summer Concert Series is held in conjunction with the Farmers Market at Ramona Garden Park from 3 to 6 p.m. on Sundays. On Sunday, Sept. 15, the Cinders Blues Band will give you plenty of opportunity to shake that thang. Featuring guitarist Dorian Michael and a host of other talented players, the Cinders are a favorite of blues fans all over the county.

OK, Los Osos, I hear you! The weekly free concerts at Sea Pines Golf Resort are one of the coastal community’s best-kept secrets—and most fun get-togethers. Kids, dogs, and bare feet are all welcome to join the fun on the well-manicured lawn. On Saturday, Sept. 14, the featured band (starting at 3 p.m.) is longtime local favorite the Mighty Croon Dogs, sure to pump out the grooves for your dancing pleasure.

Legendary rockers the Doobie Brothers grace the stage at Vina Robles Amphitheatre in Paso Robles on Saturday, Sept. 14 at 8 p.m., along with Occasional Mustache. Formed in the Bay Area in the 1970s, the Doobie Brothers have sold more than 40 million albums worldwide. The band was inducted into the Vocal Group Hall of Fame in 2004. Tickets for this show are $43 to $83, available at vinaroblesamphitheatre.com.

A rare opportunity to see Morro Bay homeboy Jody Mulgrew and his buddy Gary Garrett perform together—now that they live in Los Angeles and San Francisco, respectively—happens Saturday, Sept. 14. It’s a house concert at St. Peter’s by the Sea Episcopal Church, 545 Shasta in Morro Bay. Jody Mulgrew and Gary Garret will harmonize like angels in the church sanctuary. Drawing on influences from the Beatles to Simon and Garfunkel, they both have sly, slightly snarky twists to many of their lyrics. Tickets for this show are $15, available at the door. A $10 barbecue will be served from 2 to 6 p.m.

The cleverly named Hay Dudes—Mike Mullins, Wally Barnick, and Kenny Blackwell—bring their musical antics to the Shine Café in Morro Bay on Thursday, Sept. 12 at 7 p.m. For reservations for seating in this smallish place, call 771-8344.

L.A.-based “alternative soul” musician Luis Oliart blends influences of funk, rock, blues, reggae, and Latin music, played on several different guitars. Oliart has performed at the House of Blues, the Hard Rock Café, BB King’s, and even Carnegie Hall. Now it’s Pismo’s turn, on Thursday, Sept. 12 at the Shell Café. Divine Alkaline and a few other acts
will also play some tunes at this
free event.

Jazz vocalist Kendra McKinley combines exotic chord progressions with intricate guitar picking and looping, layered with her extensive vocal range. Her lyrics rely on imagery and intimacy, recalling various personal moments and experiences in her life. One reviewer writes, “With a mesmerizing voice that floats somewhere between Amy Winehouse and Zooey Deschanel, the 21-year-old songbird is like a She without a Him. Add an acoustic guitar and looping effects to the mix, and her vibrato really soars. This is one rising star you don’t want to miss.” Kendra McKinley plays two free shows, on Saturday, Sept. 14 at 4 p.m. at Alegria in SLO, and Sunday, Sept. 15 at 1 p.m. at Sculpterra Winery in Paso Robles. Other performers at Alegria include Chris Broemmelsiek and Jessica Combs, and Rabbit Quinn. Ynana Rose of The Swingin’ Doors will also perform at Sculpterra.

Hard-rocking Sacramento band PointDexter plays Frog and Peach on Saturday, Sept. 14. According to the band’s promo, “Like a carefully designed experiment of an angry scientist, PointDexter uses each member’s musical proficiency to bring flavors of many genres together to promote a concept of rock revolution.” Their influences include Foo Fighters, Led Zeppelin, Incubus, and even classical, blues, and jazz.

The Famous Jazz Artist Series features Charlie Shoemake performing a solo jazz piano concert on the beautiful Mason-Hammon grand at D’Anbino’s on Sunday, Sept 15. Vocalist Sandi Shoemake will join him for a few tunes. There are two performances, at 4 p.m. and 7:15 p.m., both priced at $15. Call 927-0567 for reservations.

Northern California gypsy roots band The Crux is coming to Frog and Peach for a no-cover show on Tuesday, Sept. 17 to promote their new album, The Ratcatcher. It’s a recording made up of songs from an award-winning play with the same name, co-written with theater troupe The Imaginists. “The Crux is part barn dance and part late-night Eastern European party. They mix the mood and texture of Tom Waits, the wild abandon of Gogol Bordello, and the rhythm and lyricism of Devil Makes Three to create a theatrical and danceable performance,” according to publicity materials.

And those are just a few of this week’s musical offerings in this SLO County community of live music fans. Enjoy!

Kathy Johnston is filling in for Glen Starkey, who decided to travel on to Avalon—for a vacation on Catalina, that is. Tell him you miss him at gstarkey@newtimesslo.com.