'Won't You Be My Neighbor?' is a wonderful tribute to children's TV host Mr. Rogers

WON'T YOU BE MY NEIGHBOR? 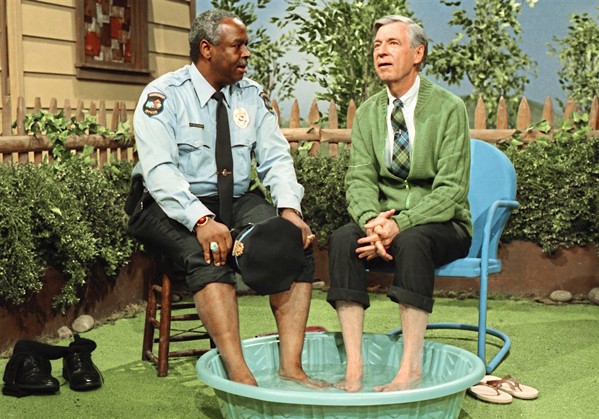 Glen It's easy to dismiss Fred Rogers as "just" a children's TV host, and a sappy, low-budget one at that, but this documentary reveals just how deeply he cared about children; how hard he worked at helping children through topical issues such as Robert Kennedy's assassination, divorce, and war; and how seriously he took his role as host of positive children's programming as foil to what he saw as bad role modeling and encouragement of humanity's baser instincts in other kids' programs. This documentary mixes archival footage of his show, both off screen and on; interviews with those who knew him and were part of his show such as his wife Joanne Rogers, and members of his cast such as Betty Aberlin (Lady Aberlin) and François Scarborough Clemmons; and particularly memorable guests such as Yo-Yo Ma and Koko the sign language gorilla. There's even some animation to help illustrate some of the narration about his life. Though I watched Mr. Rogers' Neighborhood as a kid, I really don't remember much of it, perhaps because Rogers was never heavy-handed or didactic. His main message was love and acceptance. He wanted each child to know he or she was loved and capable of loving. He also wanted kids to know that whoever they are, that's good enough. It's about as close to Jesus' message as you can get, but ironically it was a message that led to backlash by—get this!—conservatives who argued Rogers created a generation of entitled brats. The "God Hates Fags" Westboro Baptist Church considered Rogers—an ordained minister, by the way—an enemy, too. They actually protested Rogers' memorial service. As far as I'm concerned, that's a ringing endorsement! He's rankling the right hides, but it's hard to believe such a gentle, sweet, loving person could be so polarizing.

Anna While we both grew up with Mr. Rogers as a children's television host, my experience differs quite a bit from yours in the way that I remember his presence and his show in my childhood intrinsically. I remember the Land of Make Believe. I will singsong lyrics from his program without a second thought in my day-to-day. I dreamt as a girl that Mr. Rogers was a long-lost uncle who would one day come to our family picnics and play with me (still dream it, to be honest). Perhaps it speaks to the fact that we grew up in different generations; PBS didn't officially launch until 1970, while you were a kid—a full-fledged one at that—and my relationship with television didn't start until 15 or 20 years later, when more programming like Reading Rainbow and Sesame Street were the norm for young mornings as cereal got guzzled down and the older siblings got shuffled to school. I'll admit it right off the bat: I've got an affinity for Mr. R that millions of people my age share; he's a symbol of simple, gentle love, a reminder that it is not only all right to feel, but important to do so and with gusto. That you are good, that we are good, and we are loved just as we are. The argument against his ideals continues today; people are worried the coddling of children makes them weak, telling them they are loved and needed and special spoils the bunch, that we are raising selfish and difficult children to be selfish and difficult adults. The beauty of this film is that it addresses it all—from racial tension to religion, from sexual identity to acknowledging and appreciating our differences. I'll say this for sure: Won't You Be My Neighbor? did nothing to dissuade my love for Mr. Rogers and the characters he gave kids to work out their own way in this world.

Glen There's certainly something intrinsically emotional throughout. Maybe it was simple nostalgia or being warmed by his message, but this documentary had me choked up throughout. Seeing Mr. Rogers gaze with love into a learning-disabled child's eyes, watching him invite African-American cast member François to soak his feet with him in a child's wading pool during a time when whites and blacks didn't swim together, or seeing Rogers channel the empathic tiger sock puppet Daniel just got me. It's not like Rogers was without fault. When he learned that François was gay, he thought that was something that needed hiding for fear it would undermine his program, but Rogers was right on race and right on inclusion of disabled children during a time before such kids were mainstreamed in public schools. It's also amazing to see Rogers go before Congress and argue for the worth of public television. It's now decades later, and our current president seems bent on dividing our country by race and stripping federal funding from the arts, NPR, and PBS. This documentary is a reminder that there was a tireless champion of tolerance and inclusivity. We could certainly use that again. What makes the film even more poignant is its depiction of Rogers at his lowest. Looking at our culture today, it's clear his message didn't prevail. Still, his message was a worthy one and remains so today. Won't You Be My Neighbor? is a wonderful celebration of a wonderful man who touched countless lives and exemplified a life well lived.

Anna It does call to the political climate today in a harsh and unignorable way, especially since funding for the arts has been deemed unnecessary by the current administration. Luckily, films like this come around to remind us of the good. I, too, was a streaming river of tears throughout. Rogers' basis was in faith; he went to the seminary and exuded Christian values in the best way possible—through love and acceptance, and also through fault and penance. As a crusader for early childhood education through television as well as an advocate for individualism and acceptance, the hero-in-a-cardigan shines through with a smile and a kind word. Learning of his imperfections and inner dialogue does nothing but fascinate me more with the man I have always wanted to sit next to and soak my feet in a pool with. Won't You Be My Neighbor? is a lovely tribute to a most humble hero and advocate. See it and be grateful that Rogers chose to share himself with the world in a way that let us sit and be in silence with him for a bit each day. I for one will always love him. Δ