Words for the human community: The SLO Poetry Festival celebrates its 30th anniversary

I first met Kevin Patrick Sullivan when I was a student at San Luis Obispo High, where Sullivan seemed to be known among the English faculty as the school district’s most poetic groundskeeper. I can still recall him bursting into my first-period class with the announcement of a new composition. Back then, I thought of Sullivan as a janitor with an uncommon flair for language—a missed opportunity. Now, I envy the guy: Here’s an artist with the good sense to secure a day job unrelated to his creative practice. Not teaching it, not editing it, but doing it.

Sullivan moved to San Luis Obispo County from Michigan in 1975, and shortly after began writing poetry, inspired by the work of the Beat poets and the tranquil beauty of his new hometown of Shell Beach. If there ever was a time and place to begin writing, he reasoned, this was it.

In 1983, Sullivan co-founded the San Luis Obispo Poetry Festival with fellow poet Karl Kempton. Originally conceived as a fringe event to the Mozart Festival (now called Festival Mozaic), the event grew into an independent happening that steadily began drawing poets from farther and farther afield. Since 1984, Sullivan has also been holding a series of monthly poetry readings called “Corners of the Mouth,” held every third Sunday at Linnaea’s Café.

The SLO Poetry Festival celebrates its 30th anniversary this year. To celebrate, Sullivan and company have not only lined up an engaging program for the 2013 event—which runs Nov. 2 to 17—but are working on a literary journal called Language of the Soul: A Celebration of 30 Years at the SLO Poetry Festival, which should be available next year.

This year, the festival welcomes poets from all over California: Jerome Rothenberg from Encinitas, who recently released his book A Poem of Miracles with the local publisher Word Palace Press, joins Robert Kurt from Los Angeles, Patrice Vechione from Monterey, Mary Kay Rummel from Ventura, and Kurt Lipschutz from San Francisco. Local favorites such as Glenna Luschei, Nixson Borah, Michael Hannon (more on him below), and the Central Coast’s current Poet Laureate, Jerry Douglas Smith, will also be featured.

You can check out languageofthesoul.org for the full schedule, but here are a few events of note.

Kenneth Rexroth: The Signature of All Things

Directed by Lindsay D. Moffard, this documentary was filmed at an unforgettable event in honor of the venerated poet Kenneth Rexroth. Hosted by Michael C. Ford, the intimate evening of stories and readings was presented by musicians, poetic luminaries, and family members of the late poet. Held at Beyond Baroque, the esteemed L.A. poetry venue, on the 100th anniversary of Rexroth’s birth, the warmth and camaraderie of the evening can be felt despite the documentary’s rather pedestrian filmmaking. (Director Moffard largely relies on a single angle throughout the evening, making for a surprisingly static presentation of a dynamic event.) Long Beach poet Philomene Long delivers a terrifying and wonderful reading of Rexroth’s translation of “Nicholas, The Experimental Dog” by Raymond Queneau, and former SLO County Poet Laureate James Cushing reads an excerpt from Rexroth’s 1958 essay “Jazz and Poetry.”

As a film, it’s unremarkable, but as a record of an unforgettable night, The Signature of all Things is a priceless artifact.

American poet and translator Jerome Rothenberg is known for an approach to poetry he dubbed “ethnopoetics”: text versions of oral poetry and ritual storytelling that strove to retain the power of oral performance through the written word, often incorporating aspects of visual and sound poetry. His Technicians of the Sacred, published in 1968, was the first of several enthnopoetic anthologies of traditional Jewish, Native American, and American poetry. He was also the first to provide English translations of many German poets, including Günter Grass.

In addition to these achievements, Rothenberg has also remained a prolific poet in his own right. The title poem in his new book A Poem of Miracles describes the form as A miracle/more ordinary than/the grass/under our feet/the hot sun/as it dazzles/eyes & skin. 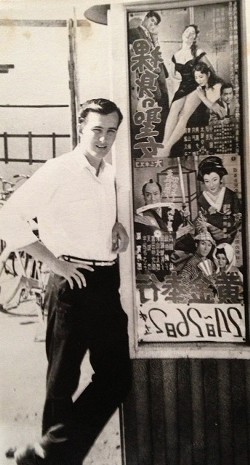 “He was a great poet over 30 years ago when I came into the world of poetry,” Sullivan commented. “He was a poetry god. And he still is a poetry god.”

Like Sullivan, Hannon has spent a great deal of his life supporting his art through working-class jobs—including a 20-year career painting houses following his return to San Luis Obispo County, where he lived as a child.

Hannon will read from Imaginary Burden, his recent book of selected poems. Imaginary Burden follows the poet from 1966 to 2007. In that span, Hannon’s work has loosened considerably, moving away from Christian imagery and toward what he calls “a tantric consciousness.”

“I think, in general, poets—young poets, especially—the lesson to be learned is that poetry is supposed to be about we, about us, about the human community,” Hannon, now 74, said of his creative practice. “When it starts out, the poet says I a lot, and that’s OK. But what you learn is, hopefully, what Rimbaud meant when he said ‘I is another.’ I’ll write the poem, and then there follows a period where I work at getting myself out of it … taking the I, the personal I, the self if you will, out of the poem. You start out, you are writing about yourself. You live long enough, or you learn enough, you realize the self doesn’t exist.”

Hannon has a way of organizing his poems into short, potent little odes—each one able to stand alone, yet lending itself to a greater vision. In his “Slender Means,” a portion titled “False Spring” seems at first to scoff at the naïveté of a tree “fooled by false Spring,” as he puts it: a profligate scattering its gifts/to wake the winter heart. The following line, however, brilliantly turns it all around: Envy this one, you sticks of caution.

Hannon reads at the San Luis Obispo Museum of Art on Friday, Nov. 8, at 7 p.m.

Arts Editor Anna Weltner is the orange heart pulsing in the dull coals of the office. Or something. Contact her at aweltner@newtimesslo.com.

This article was updated on Thursday, Oct. 31 to fix an incorrect date.