Work to do: In wake of Title VII Supreme Court ruling, LGBTQ-plus activists say the equal rights movement still has a long way to go

He's been called flamboyant for his clothing style, which he "changes up pretty dynamically," from suspenders and a bow tie, to jean shorts, to cashmere sweaters and scarves. He often sports a rainbow-colored Pride bandana in his back pocket, too.

"I wear my colors," Tidd said.

But on the Central Coast, simply being himself comes at a cost. Tidd has experienced workplace discrimination from all angles, from customers, co-workers, and managers. He's been fired from three jobs in North County after his sexual orientation became a subject of attention and discomfort.

During one stint a local coffee shop, he said the shop owner told him he was "too gay, too flamboyant, and too charismatic" for his own good.

"The next day I ended up getting fired," he said. "That one hit more personally because he directly expressed that I was too gay. ... I ended up living out of my car and I was homeless for a bit."

Stories like Tidd's are all too common, even in a state like California where anti-discrimination laws apply to LGBTQ-plus people. After he lost the cafe job, Tidd talked to an attorney about filing a lawsuit, but ultimately he lacked hard evidence of the misconduct, and his co-workers declined to testify.

"No one was comfortable speaking out," he said.

These accounts are why equal rights advocates remain clear-eyed after a landmark U.S. Supreme Court decision in June granted Civil Rights Act employment protections to LGBTQ-plus workers. For the nearly half of U.S. states that didn't have these protections in place, the ruling fundamentally changes the legal landscape of their workplaces. But there's still much work to be done to achieve true equality and inclusion. 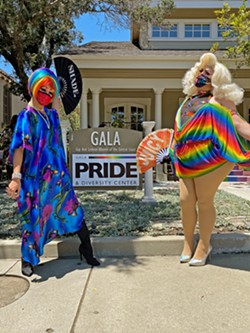 "With the current state of the courts, it caught me off guard that anything proactive would come out in Washington right now for LGBTQ rights. It was definitely a great moment," said Sam Byrd, a board member for the Gala Pride and Diversity Center of the Central Coast. "[But] we have to go well above the law. You have to create inclusive environments where people feel comfortable enough bringing their full selves to work."

For Tidd, finding inclusive work in SLO County has been "a constant battle." The news of the court ruling felt like a victory but also a reminder that discrimination still "happens pretty frequently and pretty often."

Byrd, who moved to California from North Carolina a few years ago, said he has also endured discriminatory work environments in his past. He hears about them now from the college students he works with at Cal Poly, as the coordinator of LGBTQ-plus initiatives.

"A lot of the students come from even more rural areas and they talk about not feeling comfortable enough to work as their authentic self," he said. "If you do a campus climate or workplace climate poll, you can see what the people really experience. And that's, to me, just a big part of creating environments that are non-discriminating."

The Supreme Court ruling, in Byrd's opinion, marks an opportune time for employers and their regulators to check in on compliance with anti-discrimination laws and policies.

"Are we truly compliant?" he asked. "Until someone really sues or brings these gaps that are still in a lot of workplaces to the forefront, we usually don't hear about it. We need to be critically examining all of our workplaces proactively."

Advocates also hope that the recent ruling will empower more employees to fight back against violations when they occur.

"Maybe they'll feel like they have even more of a way to speak up now," said Michelle Call, executive director of the Gala Pride and Diversity Center.

Call, Byrd, and others are now looking to the future to see if the decision puts pressure on Congress to codify more protections for LGBTQ-plus people in still-unaddressed institutions, like health care.

"We have to close the critical gaps," Byrd said. "There's been an onslaught of attacks on the trans community. There's a huge push to deny gender affirming care. ... It's still legal to discriminate in federally funded programs, like hospitals, colleges, adoption agencies, and public accommodations such as hotels and restaurants."

Byrd asked for the community's support in the fight and pointed to national advocacy groups, like the Human Rights Campaign and the National LGBTQ Task Force, as good sources of current information.

"We need our allies to be aware of what's happening," Byrd said. "If you have the privilege of never having to think about these issues, you're usually blinded to the issues that affect underrepresented communities. We ask that folks educate themselves."