Workin' at the car wash, yeah!

Paul McCartney or John Lennon? Po-tay-tow or po-tah-tow? For here or to go? Life is full of choices, and when it comes to watering holes in SLO Town, one of the classic choices is Bull’s or McCarthy’s. 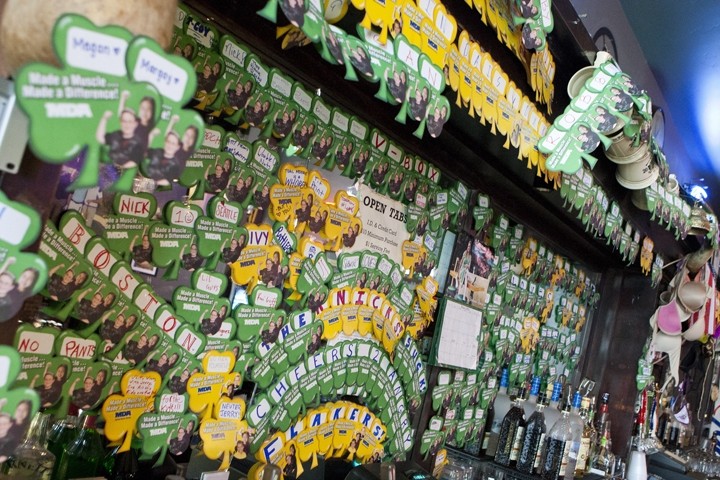 The bars—both owned by Ash Management—have a long history of friendly competition, but during the last month or so, they’ve taken this competition to a whole new level. Bartenders from both establishments have been locked in a race to see who could sell the most Muscular Dystrophy Association (MDA) shamrocks, and the stakes were high. The losers agreed to put on a car wash to benefit the Central Coast Autism Spectrum Center … while wearing Daisy Duke short shorts!

“They kind of hatch these little side bets every year,” said Bill Hale of Ash Management, “but this year they
decided to really get behind it and do something big.”

When the shamrocks were tallied, McCarthy’s had raised more than $1,600 for MDA—an impressive amount, but not good enough. Bull’s came in with more than $1,900!

“I’m really proud of this one,” Hale said. “Not only did both bars raise more than $3,500 for MDA, but now they’re going to raise money for autism. Sometimes we get beat up in the press for trying to profiteer off of drunken college kids, so it’s important for people to know we do a lot of these sorts of things.”

McCarthy’s bartenders will be washing cars in the bar’s parking lot on Saturday, April 7, from 11 a.m. to 2 p.m., and yes, they’ll be wearing short shorts! And it’s not the first time the bar has raised money for the Central Coast Autism Spectrum Center.

“They did the very first fundraiser for us, a crawfish boil,” said board member Mercedes Meier, whose son is autistic and whose husband is Ron Meier of Ash Management. “It’s a difficult condition, rated the most stressful on families. Our center primarily supports autistic individuals and their families, but we also do a summer camp and community outreach. For example, we work with the police and fire departments to help them identify and handle autistic individuals. Currently, one in 88 people is diagnosed with autism, and four of out five autistic people are boys.”

Meier believes the high rate of autism diagnoses is a combination of better screening as well as some undetermined environmental factors that are contributing to an increase in the disease.

“We also raise funds by doing a Walk for Autism, which happens on Sunday, April 29 in the Mission Plaza,” said Meier, who suggested interested parties visit the center’s website at autismspectrumcenter.com for details about how to sign up. “The car wash is also meant to raise awareness for the walk.”

I can’t wait to settle in with a beer on the McCarthy’s patio and cat call my favorite bartenders. “Looking good, Colin!” “Want some fries to go with that shake, Patty?” “I think you missed a spot, Jerry!”

“You might not ever get rich, but let me tell ya it’s better that diggin’ a ditch.  There ain’t no tellin’ who ya might meet—a movie star or maybe even an Indian chief,” sang Rose Royce in her 1976 soul classic “Car Wash.” Man, I hope that’s playing in the background!