Works by Josh Talbott and Lena Rushing featured in new exhibit, Layers, at Studios on the Park in Paso Robles

Sometimes there’s more to something than what’s on the surface. But if you dig a little deeper, you just might be surprised by what you find. 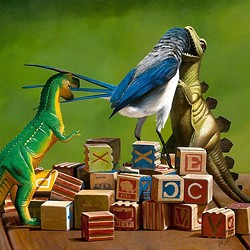 The idea of literal layers of different media stacked on top of each other and the different intangible layers of human emotions and stories is one that nicely ties together the very different work of local artists Josh Talbott and Lena Rushing in their aptly named exhibition Layers, currently on display at Studios on the Park in Paso Robles.

When the artists originally put the show together, they weren’t sure what the theme was until it all came together.

“We both have two separate styles that we work in,” Rushing said. “We put the show together and then settled on the theme. In my pieces there are literally a lot of layers, and in the paintings there’s layers of stories and ideas.”

Rushing, who describes her work as narrative with a focus on a strong female presence, is based in Grover Beach. In her piece Irrational Fears Part 2, a striking queenlike figure of a woman stands in a flowing black gown. But at first glance you’re likely to miss the monster creeping toward her in the background.

Talbott, who is based in Los Osos and describes his style as surreal, has split his work in Layers between pieces that focus on collage work and paintings that depict toys in unusual situations.

“It’s the idea of layering these different elements, but also I think that both of our works have a quality that you don’t get at first glance. There are some pieces in this exhibit that I’ve never shown before.”

In his piece Across Many Seas, a bottle with a letter inside is bobbing along in a teal blue ocean while discharge papers from the Navy are collaged into the background.

In another of Talbott’s paintings, Building Blocks 2, we see two toy dinosaurs and a blue jay standing on top of a pile of kids’ blocks. One dinosaur has the bird’s head in its mouth while the other is getting a face full of tail feather.

“Both series are very much about storytelling,” Talbott said.

Ryah Cooley is layered like an onion at rcooley@newtimesslo.com.