Every once in a while SLO Brew drops a crazy awesome week on music fans. Don’t get me wrong. There’s almost always some act I want to see there, but this week you can choose from Taj Mahal at The Fremont, Dan Hicks & His Hot Licks, The Mother Hips, Ozomatli, NOFX, and The LACS at the Brew. WTF, man? Bust out your wallets!

Let’s start with SLO Brew’s Taj Mahal show, which happens in the historic Fremont Theater on Thursday, Dec. 6 (doors at 6 p.m., show at 7:30; all ages; $40). Taj, born Henry Saint Clair Fredricks, is a Grammy-winning bluesman who manages to incorporate world music elements into his sound.

“I didn’t want to fall into complacency,” Taj says on his website. “I wanted to keep pushing the musical ideas I had about jazz, music from Africa and the Caribbean. I wanted to explore the connections between different kinds of music.”

Now 70 years old, Taj has risen to living legend status, and he’s still a vibrant, inventive multi-instrumentalist and composer of danceable, engaging music. The hardest thing about this concert will be staying in your seat. Tickets are available at Boo Boo Records or vallitx.com.

The next night, on Friday, Dec. 7 (7 p.m.; 21-and-older; $28 presale or $30 at the door), the irascible raconteur and dapper gentleman of music Dan Hicks & His Hot Licks brings a unique mélange of sounds to SLO Brew: cowboy folk, jazz, country, swing, bluegrass, pop, and Gypsy music. Best known for the songs “I Scare Myself” and “Canned Music,” he’s got a deep catalog to draw from, but hopefully he’ll also dip into his excellent holiday recording from 2010, Crazy for Christmas. It’s a real humdinger!

On Sunday, Dec. 9, you can get a double dose of Ozomatli—one for kiddies and one for the older folks! Ozokids bring their youth-focused sound to SLO Brew at 2 p.m. (all ages; $13 presale or $15 at the door). The band spreads its message of peace, communication, and understanding through its music. Later that night the band will play its show aimed at adults (7 p.m.; 21-and-older; $25 presale or $26 at the door). The L.A.-based self-professed “culturemashers” mix hip-hop, salsa, cumbia, samba, funk, and more into a worldly, urban sound that’s unforgettable! 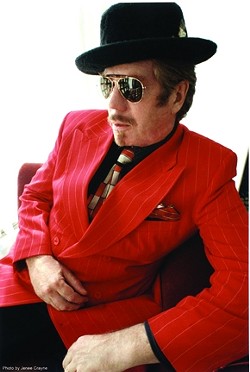 Few punk acts are as adept at skewering the political foibles of the status quo as NOFX, who play Tuesday, Dec. 11 (8 p.m.; 21-and-older), with Teenage Bottle Rocket opening. Unfortunately, if you don’t have tickets, you’re not going. This one’s sold out!

If you’re wondering what country hip-hop sounds like, head to SLO Brew on Wednesday, Dec. 10 (8 p.m.; all ages; $8 presale or $10 at the door), and check out The LACS, aka Loud Ass Crackers. If you drive a monster truck, wear overalls, and love rap, your dream just came true!

Ah, the allure of the Central Coast. It seems like there’s always someone new who came, fell and love with it, and stayed. Our newest transplant is Dulcie Taylor, who headlines Steve Key’s Songwriters at Play showcase on Thursday, Dec. 6, at SLO Down Pub (6:30 p.m.; all ages; pass the hat). According to series co-producer Bonnie Nelson, “She’s played major venues from Washington, D.C.’s Kennedy Center to Austin’s Cactus Café, Virginia’s Birchmere to The Living Room in New York City. She has shared stages with a long list of artists, including Bonnie Raitt, Jerry Lee Lewis, Asleep at the Wheel, Vern Gosdin, and Kathy Mattea. Says Sing Out magazine, ‘She has a fine, flexible storyteller’s style and a graceful voice with the flavor of her South Carolina roots.’” Welcome aboard!

On Sunday, Dec. 9, when the showcase moves to Sculpterra Winery, funny fast-picker Justin Farren will headline the show (1 p.m.; all ages; pass the hat). He’s been called “the storyteller with an impeccable voice, a guitar, and a head full of funny, tender, and engaging observation.” Guest performers for the show include Matthew White of the Ballistic Cats.

Kreuzberg is host to the Tuesday, Dec. 11, show when Owen Plant headlines (6:30 p.m.; all ages; pass the hat). Whether you call what he does Rasta folk, reggae pop, or singer-songwriter dub-ska-Americana, the Jamaican-born troubadour is just plain good. Live Oakies may remember him when he played with his band The Sunshine Brothers. Texas native Justin Soileau will be a guest performer that evening.

The hills (and the Clark Center stage) will be alive with The Sound of Music when the Nipomo High School’s nationally acclaimed drama team presents this beloved family classic on Thursday, Dec. 6, Friday through Saturday, Dec. 8. You’ll hear all the popular Rodgers and Hammerstein songs such as “Do-Re-Me,” “My Favorite Things,” and “Edelweiss.” Tickets are $10 for students and seniors and $15 for adults if purchased in advance, or $2 more at the door. Tickets can be purchased from any drama student, the NHS activities office, or by buying directly from the Clark Center box office. 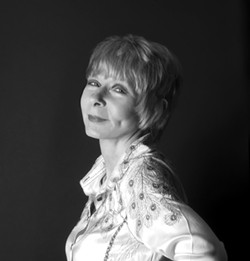 Atmodsphere, downtown SLO’s modern furniture and accessories store, is changing its name to Brick House Goods, and to celebrate they’ve got Quinn DeVeaux of the Blue Beat Review playing an in-store holiday party on Friday, Dec. 7, from 6 to 9 p.m. Located at 1119 Chorro St., they’ll be serving up Brown Butter Cookie Co.’s new spice cookies as well as tea cocktails and Giornatta wine. I saw DeVeaux at Live Oak, and he’s soul drenched and hyper cool! Stop by and check out him and the store!

On Friday, Dec. 7, Coalesce Bookstore and Garden Chapel has the perfect holiday concert for you when Celtic and early music ensemble Brocelïande plays a Yuletide concert (7 p.m.; all ages; $15; call 772-2880). According to their press materials, they play “Celtic music from the British Isles and the Medieval and Renaissance music of the European courts and countrysides, with an emphasis on music inspired by or traditionally performed during each of the four seasons.” Expect three-part vocal harmonies accompanied by the Celtic harp, octave mandolin, cello, 12-string guitar, recorders, flute, gamba, whistle, percussion, and more.

HookahStew returns to Sweet Springs Saloon on Friday, Dec. 7 (9 p.m.; 21-and-older; $8 at the door). The NorCal funk rock trio made their name in 2008 when Fox Sports featured music from their first EP Hits From the Hookah during coverage of The Gorge Games. Their follow-up single, “RollerGirl,” became popular with roller derby teams around the world and wound up in the film Whip It. And Late Night host Jimmy Fallon called HookahStew “The hardest working band in Hollywood” after catching a performance on the Sunset strip.

Get into the holiday spirit with a series of concerts by Cuesta College’s talented musical groups. The Cuesta Chamber Singers, Vocé, and the Concert Choir perform on Thursday, Dec. 7 (7:30 p.m.), in St. Timothy’s Catholic Church (962 Piney Way, Morro Bay; 772-2840) and again on Friday, Dec. 14 (7:30 p.m.), in Cuesta’s excellent new venue the CPAC (546-3936). Expect processionals, meditations, humor, carols, gospel, and jazz from around the world. Then on Wednesday, Dec. 12, the CPAC is host to The Cuesta Wind Ensemble at 7:30 p.m. Come hear the sleigh bells and carols played by the brass ensemble. Tickets cost $12 general admission, or $7 for seniors and students.

On Saturday, Dec. 8, the Pam Smith Trio plays D’Anbino Tasting Room in Paso (8 p.m.; 21-and-older; $10 at the door or $5 for Record Club members). Smith’s voice has appeared on many radio and TV commercials, and she’s played throughout Chicago with her jazz bands as well as in New York in the Persian Room of the Plaza Hotel.

The Frog and Peach is host to the awesome 10-piece soul band The Inciters on Saturday, Dec. 8, at 10 p.m. The Santa Cruz-based act bases its sound on Northern soul music that was inspired by American Stax Records and Motown sounds but originated in northern England in the 1960s. Phat horns, three smoking-hot female singers, and tight R&B awaits! They continue to tour in support of their third album, Soul Clap. “Although we’ve played all over the West Coast and parts of Europe, San Luis Obispo is still relatively new to us,” said lead guitarist Don Roland. “We had such a great time in August, and I can’t tell you how excited we are to come back.” The band first formed back in 1995 but broke up in 2005 after a successful 10-year run, leaving a legion of depressed fans in their wake. In 2009, fans got their wish as original bandleader and trumpeter Rick Kendrick put the band back together with some new, younger faces. Get on your Vespa and scoot down to this show!

On Sunday, Dec. 9, one of America’s premier jazz pianists, Bill Cunliffe, is the next attraction at the Famous Jazz Artist Series at the D’Anbino Wine Tasting Room in Paso Robles. Cunliffe—also a noted composer and arranger—is a two-time Grammy winner, and he has a raft of other awards. For this concert, he’ll primarily perform solo with an occasional sit-in from the series co-producers Charlie and Sandi Shoemake (vibes and vocals respectively). There’s a 4 p.m. and a 7:15 p.m. show, both priced at $15.

Nick & Sonya Diane Jones return to the area for a couple concerts in retirement homes. Calling it their “Have Yourself a Merry Little Christmas Tour,” they’ll appear at 2 p.m. on Monday, Dec. 10, at Emeritus at Creston Village in Paso Robles and then at 6 p.m. in Casa de Flores in Morro Bay. “Over the past 5 1/2 years, we’ve visited your area two or three times a year and had a great response from everyone,” Sonya said.

Jonathan Warren and the Billy Goats will play a two-night run at Frog and Peach on Tuesday and Wednesday, Dec. 11 and 12, at 10:30 p.m. According to his bio, “In April of 2007, singer-songwriter Jonathan Warren packed up his life and his guitar to move from Knoxville, Tenn., to the Northwest. He brought with him strong roots in traditional bluegrass and old-time music inherent in the Southern Appalachians. Warren teamed up with David Sather-Smith, a vocalist and classically trained cellist. Boise native Austin Clark added his talents on the violin, and Andrew Smith finalized the band in 2011 with percussion.” Together they play “progressive psycho billy folk grass,” saying it’s “a goat chewing on a can, it’s a cat scratching at your door, it’s foot stompin’ music that makes you want to eat a biscuit. Melodies you wake up humming in the morning that stick to your bones like peach cobbler. It’s new-timey, post-retro, pre-apocalyptic, southern Appalachian, Gypsy porch swing.” Sounds like a hoot!