World class: The Paso Robles food scene has no limits 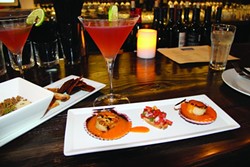 I’ve watched Paso Robles grow into a world-class destination for wine and food connoisseurs with feelings of awe and respect. Of course it all comes to down to one source, the great, artisan wineries in Paso wine country that captured the media’s spotlight. News stories that pointed out all of the boutique wines made in Paso attracted excellent chefs who left tony cities like Santa Monica, San Francisco, and Napa Valley to build great eateries here. Most of them are opening in Paso Robles and who can blame them? There seems to be no cap on the rapid growth in restaurants there. Not only are new restaurants still being built, but restaurants that opened in the last five years or so are expanding because they’re so popular.

Il Cortile chef Santos MacDonal and his wife Carole, previously from Santa Monica, have opened the new La Cosecha just two blocks from their first restaurant in Paso. From the crowds I’ve dined among in the new Latin-themed restaurant at lunch and during their opening night, it’s obvious that it’s a huge success. I’m still craving those succulent ribs with a caramelized crust that chef Santos serves at lunch. The costillitas a la grilla are braised pork ribs brushed with an achiote honey glaze and served on a bed of black beans, white rice, and Creole sauce. Not to mention his Honduran spiced and grilled Cornish game hen served with roasted potatoes and seasonal vegetables. His awesome dish marked the first time I ever liked those gamey little birds.

At the new Artisan in Paso Robles, chef Chris Kobayashi and his family, formerly from Napa Valley and San Francisco, have relocated to a bigger venue at the corner of Park and 12th streets. Now they have a full-sized bar, a cozy outdoor patio with views of the park, and a comfortable contemporary dining room remodeled with reclaimed wood and antique window panes create a chic décor. Amazingly, the new design was created by the talented chef. There are now oversized booths, a wood-fired oven for making pizzas, and this amazing chef is introducing many exciting new dishes. My husband Dan and I always enjoy the crudo of the day; our last one was yellowtail with charred shishito, lemon, sesame, and Oregon wasabi. While the new pizzas are excellent, we still love his simple but excellent dishes like the butter lettuce with chevre, beets, candied walnuts, and walnut vinaigrette. Recently, during the afternoon menu served between lunch and dinner we enjoyed the excellent pizza with goat salami, fennel-seed sausage, marjoram, and pepperoncini.

Recently Thomas Hill Organics (THO) was expanded by restaurateur Debbie Thomas, proprietor of the popular restaurant. Where guests once entered through the alley back door, they won’t anymore now that she has expanded the kitchen for chef Julie Simon. The new entryway is on the other side of the patio where she added a fabulous new lounge on Park Street. It has a comfortable wine bar where you can sit and enjoy wines from her outstanding wine list, or at the tables while waiting to get into the dining room. We love the chef’s excellent PC cattle beef burger with romesco, cambozola cheese, applewood smoked bacon, roasted garlic, and caramelized onions featured during lunch, and there’s much more.

In the old village of Arroyo Grande, the former JJ’s grocery store at 303 Branch St. will house a new restaurant. Robert’s Paso Robles (their Facebook name) is opening a second location with almost the same name, Robert’s Arroyo Grande. At first I only saw the notification of an application for a liquor license on the front window foretelling good things to come. But I have since learned of the exciting news which came to me too late for last week’s column on South County’s new restaurants. The renovation of the new Robert’s started with the installation of a new roof, and now remodeling can begin inside. Robert’s executive chef, Justin Picard, will oversee their two Paso restaurants, which includes Estrella Restaurant, and the new Arroyo Grande kitchen with three of his Paso chefs.

According to co-owner Brenda Clouston, they are in the process of hiring chefs in A.G. Take notice, those of you in need of a good job cooking in South County; you can reach out to them at info@robertsrestaurantpaso.com.

I had a great meal in Paso Robles at lunch there recently, so I can’t wait for them to open here. “We’re eager to bring South County residents our version of casual fine dining with approachable menus and comfortable ambiance while showcasing Edna Valley wines and local breweries as much as possible. I feel confident we will make the old village proud,” Clouston said.

The previous executive chef at Robert’s, Ryan Swarthout, only recently moved on. I assumed he was taking over Robert’s Arroyo Grande, but no. The chef is taking the helm at a brand new restaurant on the other side of Paso’s Downtown Park in what was formerly the Meritage tasting room for several small-production wineries. Opening at 810 11th St., the new restaurant will be named Second Press. It didn’t have a kitchen, and he noted that’s their biggest project. The former tasting room bars have been removed, and that big open room will become the dining room, which only requires painting and furniture.

“We’re on a tight schedule to get it done on time,” Swarthout explained. “I want to open in one month.” His focus is contemporary wine country cuisine with modern dishes, mostly grown by Paso Robles producers. “We’ll be utilizing local food products and vendors. My dining room manager runs a two-acre farm; his arugula is phenomenal.” A professional chef since 1997, Swarthout was one of the original chefs for Deborah’s Room at Justin Vineyards. “We’ll be doing specialty pizzas with lobster, corn, and a citrus cream sauce, and dishes like herb-infused lamb sirloin.”

With all of these exciting new restaurant expansions and openings, we locals will be lucky to get a seat as they draw even more visitors to SLO County wine country.