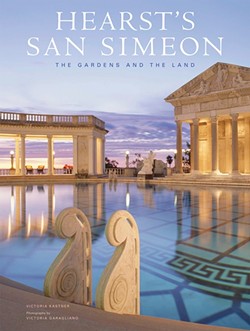 New Times Why did you write Hearst’s San Simeon: The Gardens and the Land?

Victoria Kastner The castle has always fascinated people and it’s a tremendous asset for the Central Coast, the nation, and the world. It is a remarkable world-class art museum in a magnificent setting. I realized I hadn’t written about the most important thing to William Randolph Hearst, which was the setting, the gardens. Not just the flowers, but the courtyards, the terraces, and the swimming pools. In 2005 a land conservation deal was finished which insured that all of the ranch lands around the castle would not be developed ever—the 85,000 acres that surround the castle. That is a terrific story that hasn’t been told.

New Times Who are you, Victoria?

Kastner I am the historian at the Hearst Castle and I’ve been working there for 30 years, first starting out as a tour guide. This is the second book I’ve written about the castle. My books are distributed internationally. My first book is Hearst Castle: The Biography of the Country House. I’ve lectured all over—at the Met in New York and I train the tour guides. I also give classes and write articles. I am half education and half marketing and I’m sort of the ambassador for the Hearst Castle. I am a state employee.

New Times Tell me something I don’t know about Hearst and his castle.

Kastner Hearst donated the castle in 1951 and it opened for tours in 1958. But the family only donated the land at the top of the castle. The coastline and the land that you travel on by bus to get to the Hearst Castle are still owned by the Hearst Corporation. There were many controversial plans to develop it with hotels, golf courses, a desal plant. It’s been said that this has been the most important land conservation effort in the last 100 years in North America.

Kastner I found letters and diaries of Julia Morgan that have never been quoted. After Hearst died it almost became a U.C. campus and there were even thoughts about making it a western White House. Hearst’s San Simeon: The Gardens and the Land  has a list of 400 plants that W.R. and Morgan used at the castle, so readers can make their own Hearst Castle garden. Their cattle ranch will continue to run, as it has been since 1865, with grass-fed cattle—Alice Waters uses this beef, that is how good it is. (Waters owns what is considered to be one of the best restaurants in the world, Chez Panisse in Berkeley.) The only thing that will be built on the bay in San Simeon is a hotel with 100 rooms, designed by W.R. himself, with Julia Morgan, in 1929 (start date unknown). There was a hotel on that same piece of land in the 19th century. It was a huge natural bay, so it was a deep water shipping port. If Hearst developed it, it could have been as big as any port in southern California.

New Times Tell me about the photography in the book.

Kastner Victoria Garagliano took 150 color and 150 black and white photos recently, of all parts of the land, the zoo, and at all times of day. We have 100 historical photos, and of all the celebrities who came to the castle.

Kastner What W.R.’s was—the incredible setting. But the fact that the Hearst family protected this place forever—that it will never be changed— that is the most amazing thing.

Christy Heron walked into the walk-in liquor safe at Hearst Castle; although she can’t believe it only held liquor. Top that at cheron@newtimesslo.com.