The Central Coast Writers Conference runs from Sept. 27 to 29 and same-day registration is available. The cost for the whole weekend is $300 per person, with stand-alone events ranging from $20 to $50. Visit cuesta.edu for more information.

She was so scared she couldn't even bring herself to get out of the car. So Teri Bayus sat in the parking lot at Cuesta College until she summoned the courage to get out and walk over to registration to sign up for the Central Coast Writers Conference. After all, her husband had double-dog dared her to do it.

"It took about three years for me to get up the courage to go," Bayus said. "I was sure that they would see some kind of sign on my head that said, 'Not a writer.'"

Even though Bayus was regularly writing about food for CalCoastNews when she attended her first conference, getting started in the world of literary writing was still intimidating. And she's not alone. In 2014, Bayus drove the conference's keynote speaker, Anne Perry, an author from Scotland with 75 books on the New York Times Best Sellers list, around town. When Bayus asked Perry how writing her latest novel was going, the Scottish writer sighed and said, "Oh, it's terrible. It's the worst thing I've written."

"No matter how successful we are, almost all writers are insecure about their writing," Bayus said. "Come find your tribe. We all feel the same way."

As the conference begins on Sept. 27, it marks the 34th year that aspiring and published writers across different genres and formats have come together to improve their craft. From workshops on finding the time to create, to classes on signing with an agent, to lectures on script editing, the conference caters to writers of all levels of experience. Every year, Bayus said that at least a handful of authors who got their start at the conference are hired to teach other aspiring writers. About 30 published authors who currently reside on the Central Coast either cut their teeth at the conference or have guest lectured at the annual event.

"We set up to build the writer's confidence throughout the whole journey," Bayus said. "I believe that everyone has a story to tell."

New Times caught up with two of this year's conference lecturers to see how their careers have jumped off the page since joining the annual event.

From the page to the screen

Jonathan Maberry has more story ideas than he has time to write. And with more than 30 books published (and counting) and a Netflix show in the pipeline, that's saying something.

"Being trained as a newspaper reporter where you're always looking for a hook, and being mentored by Ray Bradbury, I see ideas all over the place," the Del Mar-based author said.

One of Maberry's "what ifs" turned into his popular V-Wars comic book series, which chronicles the early days of the Vampire Wars and offers a glimpse at the battle between humans and hundreds of new species of vampires. This March or April, V-Wars will debut as a show starring Ian Somerhalder (The Vampire Diaries) on Netflix, five years after the first book came out.

"It's a complex story about race, politics, and identity," Maberry said. "It's saddening to see intolerance be such a national issue. I think there's going to be a lot for the public to talk about when the show hits."

This last weekend in September marks Maberry's seventh year attending the Central Coast Writers Conference as a speaker or instructor. On Friday, Sept. 28, Maberry will teach a class on How To Move Your Work To Hollywood as well as The New Fan-Based Novel Approach, and on Saturday, Sept. 29, he'll teach How To Tap Into Fears and Feelings To Sell Books and Action Speaks: How To Write A Thrilling Action Scene. 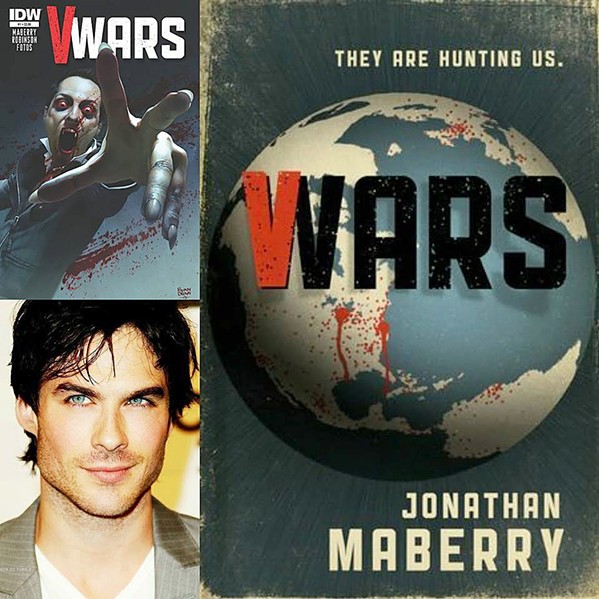 Maberry's six-hour workshop on writing action and fight sequences will draw on the author's experience practicing kung fu and working as a bodyguard and self-defense instructor.

"Almost every story has dramatic tension," Maberry said. "An action is anything that drives the story forward with excitement. The workshop will teach them how to do that in a way that suits their novel."

Tucked away behind the main house in a quiet neighborhood near Bishop Peak in San Luis Obispo is a quaint but inviting structure that stands just 10-by-12 feet tall. It's all the space that best selling author Eldonna Edwards needs to craft her coming-of-age stories featuring clairvoyants, cult members, and the biblically possessed.

As a new transplant to the West Coast in 2000, Edwards attended the Central Coast Writers Conference for the first time. Fast forward to today, and she now boasts a memoir about kidney donation (Lost in Transplantation) and a novel about a preacher's clairvoyant daughter (This I Know) that are on bookshelves around the country, with three more novels on the way.

"The writing community is amazing," Edwards said. "That's my tribe. You get around that creative energy and I don't care who you are, you're going to walk out of there, you're going to have so many ideas your hand is just going to be flying across your notebook." When it became clear that writing would be her main source of employment after working in massage for 25 years, Edwards realized she needed a space dedicated to her craft. On the property that she and her partner (and in-house editor) own, they rent out the main house and live in the small granny unit out back, leaving little space for creative pursuits. Talk of "she-sheds" or the ladies' version of a man cave dominated the writers groups that Eldonna belongs to. So she ended up designing and ordering a shed through Home Depot online for around $6,000. The finished product is a cozy space that Edwards furnished with a hanging seat swing, a sofa, and a desk. Sunlight from the windows and open door dances against the mandala wall hanging that teems with pinks, blues, and yellows. She starts her mornings with an espresso and a few hours spent writing in the perfect silence of the she-shed. But not all of her work happens there.

While Edwards penned a rough draft of her first novel, This I Know, in 2000, it wasn't until 2016, the same year her book won the Lillia Dean Award at the conference, that she started to send out query letters to agents. Half a year later she signed with Regal Hoffman in New York and in the spring of 2018, This I Know was published.

"I'm really, really grateful for how well This I Know has done," Edwards said. "It's all about confidence building, and that's what the conference does. You walk in thinking, 'I want to go to a screenwriting workshop, but I'm not a screenwriter.' But what I've learned is you walk in there and you walk out and think, 'I could write a screenplay. Why not?'"

On Sept. 27 and 28, respectively, Edwards will teach two workshops at the conference: Truth Be Told: Writing A Memoir Worth Reading and When Your Memoir Wants To Be Fiction: How To Write A Novel Inspired By Real-Life Events. She hopes to distill the differences and similarities between memoir and fiction while giving attendees some valuable writing time and feedback on their work.

"People have a great story, but they don't want to really tell their story," Edwards said. "You can free yourself from your story through imagining what your story might have been, especially if it was a painful story. If I had written a memoir about being a preacher's kid it would have been really boring. But if you take a psychic as a preacher's kid and throw her in with this really dogmatic minister and juxtapose those two and see: Will his devotion to his faith win out over his devotion to his family?"

For new writers looking to be published, Edwards recommends writing at least two books before sending out query letters in order to really hone in on what works and what doesn't. As she knows, it's never too late to start writing.

"Never give up," Edwards said. "I published my first book when I was 55. I was 58 when my debut novel released, and I'll be 60 when my next book comes out. People say, 'Oh, I'm too old to write a novel.' No, you're not. I know writers who wrote their first books in their 70s. Never give up on your dreams."

While one of director Bayus' dream goals for the conference is to see every author who attends become published, the simple secret to the Central Coast Writers Conference is that everyone is really, really nice to new writers looking to join the craft.

"We only hire kind people who have a real, honest, sincere need to help other writers find their voice," Bayus said. "Everyone is afraid. We know that and we embrace it." ∆