Written and performed by Cuesta's drama department, Mystery of the Loose Moose shows through Nov. 3

If you've ever wanted to see a real play written by Corky St. Clair—the fictional character of the popular 1996 American mockumentary film Waiting for Guffman—now's your chance.

OK, not actually—Corky is a fictional character, so he didn't truly write Mystery of the Loose Moose, an original farce by the Cuesta College Drama Department currently showing at the Miossi Theater, playing until Nov. 3. 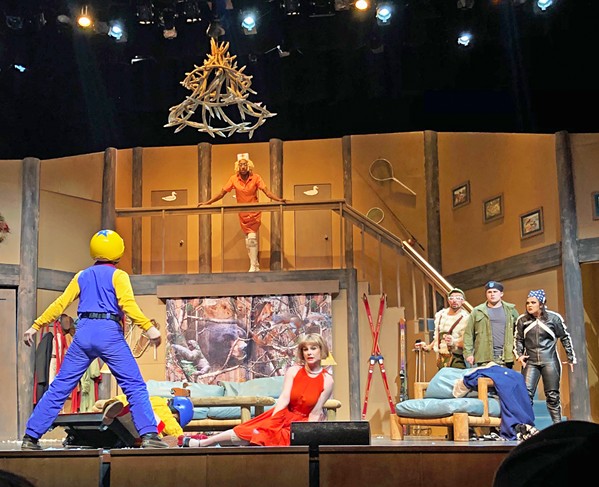 Similar to his community-theater-director role in Waiting for Guffman, the premise of The Mystery of the Loose Moose is that Corky has been asked to develop a play. This time, his band of actors is based in Saskatoon, Saskatchawan, in Canada, and the play aims to celebrate the 50th anniversary of the Moose Lodge Spaghetti Social. The plot features an elaborate backstory where bree valle—the actual, real-life human, and artistic director of Cuesta's Theater Department (who does not capitalize her first or last name)—just happens to be at a dinner with Corky. After a (fake) phone call with the Cuesta College President Jill Stearns, the play is arranged to show at Cuesta.

Of course, none of this backstory is true, per se, but that's all part of the fun. Valle is the real director of the play—but for the sake of the joke, get ready to pretend that Waiting for Guffman was a real documentary all along.

With a run time of 50 minutes and 20 student cast members, the play follows a "devised" style of theater making, also known as "collective creation," in which the scripts are a collaborative effort among writers and actors. With this production, the students in the class that produced the play will get their names in the final script when it's sold to other theater companies.

Valle also emphasized that while the basic plot of The Mystery of the Loose Moose will remain the same, other elements of the production may change from night to night depending on audience reaction. That, she said, is the essence of devised theater making.

"Normally a devised production takes three to five years to develop, and they use test audiences and things like that," valle said. "But we've been working on this show for eight weeks."

Devised works essentially start from scratch rather than using a production that already has set lines and stage directions. Valle said while that it's indeed more difficult to attempt a devised work, the reality is that few established plays—besides musicals, which are costly due to music royalties—can accommodate 20 actors.

"A lot of schools choose not to do this kind of work," valle said. "They would rather go with something that they know will get butts in seats, that's been tested already by an audience."

Despite the difficulties, valle said that the original and inventive nature of devised work makes it a less restrictive experience.

"It's much more of a collaborative team, and our roles become more fluid," valle said. "I have no preconceived notions of what the show might be except that it's going to be a murder mystery."

Valle said that she hopes the comedic show can "provide just a little bit of relief from the stressful ... environment that we live in," she said. "To sit as a group of people and strangers and breathe the same air that the performers are breathing, and perhaps laugh wholeheartedly: That's so rare." Δ