You'll have to attend Poly Con��

Verisim, a live action role playing (LARP) troupe based in San Luis Obispo, is a little like Fight Club. Not that they actually fight. Unlike many other LARPing groups, members of Verisim don’t use weapons—called boffers—to attack one another. In lieu of boffering the stuffing out of one another, they rely upon words as tools to express physical action. An example of this would be Verisim co-founder Candace Carpenter announcing, “I walk over to Brian and hit him with my magic sword.” 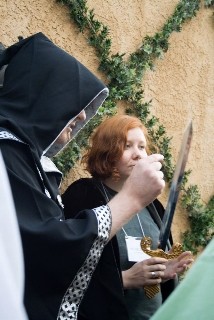 “Touching is frowned upon and discouraged,” explained Carpenter. Many LARPS run games at conventions, where gamers might not know one another or be familiar with other players’ physical boundaries. Plus, sometimes characters feel compelled to take drastic, or even violent, in-game action. It’s not always in the best interest of the writers to create a scenario in which characters will be driven to kill one another, but in a game where only a limited number of people can survive, players often make reckless, and Machiavellian decisions—particularly as the game begins to wind down.

But the group certainly has Fight Club’s intimidation factor down, if only because learning about LARPing is akin to trudging through a Byzantine network of underground tunnels. In snowshoes. With well- meaning guides fluent in a language other than your own. For lovers of fantasy and adventure, however, the new terms may be worth learning. Verisim is always willing to expand its player pool.

“Verisim was founded in order to secure a venue,” explained Carpenter. “There is this creepy little hotel out somewhere on the 5, attached to this gas station. It was a functioning hotel and we stopped at the gas station during a trip to Burning Man and we got out and said this would be awesome for some kind of horror LARP’.” But the couple that owned the hotel didn’t have a very strong grasp of the concept of LARPing, and, in fact, seemed somewhat convinced that the would-be LARPers were part of a film crew from L.A., and would damage the hotel while filming. So, Carpenter and her friends created a Web site to explain their hobby. In the end, however, the horror LARP fell through when the hotel owners refused to sign a contract agreeing to rent the rooms out in advance.

The founding members of Verisim were running games at a convention the following year, when they realized that they could take advantage of their established Web presence by writing games together. The group isn’t encumbered by any hard and fast rules regarding LARPs, or who writes them. Some members attend a handful of conventions throughout the year, while others only attend Poly Con, an annual gaming convention hosted by Cal Poly students. At this year’s convention, Poly Con XXVI—which has a steampunk theme and runs July 4 to 6—Verisim will run a small-scale LARP created by its members.

Each game, or plot, starts with an idea.

“If somebody doesn’t have an idea, we don’t write something,” said Carpenter. This may sound like a fairly basic concept, but it’s worth noting that the group exists purely because its members love LARPing. And if writing or participating in a game isn’t going to be enjoyable, then they simply don’t do it.

“The most important part is the idea,” added Luke Speer. “Because if you’re not excited about your idea then you’re not going to be able to write characters.”

Past Verisim LARPs have included a plot about wizards from 12 different schools of magic, who must overcome their mistrust of one another in order to protect their world; a Victorian steampunk LARP set aboard the fictional HMAS Prometheus; and a 25-person adventure set in ancient Egypt. The setting and characters are as wildly divergent as the writers’ fertile minds can create.

One of the more common plot devices is a throne war, in which players struggle for top banana titles like CEO, president, or king. Sometimes, this is established when the players take a vote, an activity preceded by politicking, promises, and—more often than not—lying. Essentially the writers, or Game Masters (GMs) establish initial conditions and obstacles for the participants to interact with and against, leaving the actions of the players to determine the outcome. For this to be successful, it’s important for the writers to have an accurate grasp of and respect for player psychology. Part of this involves making sure that the players feel a sense of agency; if they wanted to play a game in which the outcome was pre-determined they would participate in murder mysteries. The writers of Verisim also place a lot of emphasis on creating solid characters.

Unlike other genres of LARPing, in which players construct long-term characters and identities, Verisim LARPers are never the same characters. Depending on the size of the LARP—Verisim writers generally create plots for 10 to 30 players—each character has a specific goal or set of goals that helps further the plot. Sometimes this entails fighting another character for a specific item, or prop. Prior to each game, GMs provide participants with a questionnaire to establish which character they are best suited to play. While the persona must immerse the player in their new fantasy world, it’s also important that the player find the character sympathetic, enabling them to happily pursue their character’s aims. For this reason, writers are generally reluctant to develop a good character/ bad character paradigm in their plot.

“Despite what people say about themselves there are not a lot of people who would throw their back into being evil,” explained Amanda Carpenter, a Verisim writer. Also, when a player is cast as an evil character, they often feel backed into a corner—if only subconsciously. The LARP may not have a stated conclusion, but most players will be motivated to ensure that the evil characters are punished, and the good rewarded.

Players’ actions and decisions tend to become particularly risky during the last hour or so of game play, a phenomenon the seasoned LARPers of Verisim call ‘last night syndrome’. And in a group with more than 50 years of combined LARPing experience, they’ve experienced this syndrome a lot.

“At the start of the game everyone will be very conservative but once you’ve only got an hour or so left…” said Brian Matis.

“And you’re like ‘I’ve got this nifty doodad and I haven’t used it’,” added Speer. At the end of the game each character is effectively dead, non-existent, so players tend to behave as if it’s their last day on earth. And if their behavior is anything to go by, everyone’s last day on earth may be one wild ride.

The conclusion of each game is determined either by time or the achievement of a particular event or goal. At a conference, each game is allotted a playing room for a specific number of hours, usually four or six. But when a LARP is set at someone’s house, it can run until the players have reached a conclusion. During the Verisim steampunk LARP, the plot began when a Zeppelin took off into the air—with players on board—and the game was intended to conclude when it landed. Several of the players were caught prolonging the game by circling the Zeppelin above its landing site.

The LARP setting determines a lot about the game parameters, how many people will play, and how long the game will last. But it’s rare for the writers of Verisim to pursue a venue as remote as the horror hotel somewhere out on the 5. Most of the time, they’re content to use someone’s house. In fact, the LARP that they’re currently writing, inspired by the historical fantasy book Jonathan Strange & Mr Norrell, will most likely be held at the house Candace shares with her husband and fellow Verisim member Kurt Horner in SLO. Magical worlds aside, all they really need from a venue are one or two rooms and a table with a couple of chairs.

Props are a similar situation. Some writers assemble index cards to represent important in-game objects. While this is inarguably the cheapest and easiest method of preparing for a game, the Verisim writers try to represent important in-game items with real props. Amanda recalls a Wild West fantasy LARP she attended, where the writers went all-out in terms of props. The problem with this strategy was that many of the players were laden with bags of props. The positive? It was much more difficult for players to steal from one another.

The LARPers of Verisim invest a lot of time and energy in their hobby, but they’re quick to point out that they have lives in the world of reality as well, contrary to their stereotyped portrayals in popular culture.

“There are a lot of gamers that are sensitive about our hobby,” acknowledged Candace. “But we’re adults. And I can talk about my hobby at work. I don’t think that what we’re doing is too far afield from everyone else’s niche hobby.”

And even if LARPing is worlds away from the traditional American pastime of entrenching yourself on the couch and watching endless hours of television, Candace doesn’t have a problem with that.

“This is a way for us to write and express our artistic sides, which a lot of people don’t have an opportunity to do,” she added.

For would-be LARPing newcomers, who want to meet the writers who send adventurers to exotic locales with equally fantastic characters, Verisim will be running a game at this year’s Poly Con. The learning curve may be steep but, at the end of the day, there are really only four words you absolutely have to remember: It’s just a game. Win, lose, kill your best friend with a spoken word, it’s just a game.

INFOBOX:  Get in the game

Arts Editor Ashley Schwellenbach wouldn’t object to a nice little LARP, but thinks it would be better with weapons. Send guns wrapped in Styrofoam to aschwellenbach@newtimesslo.com.