Y this and not that? 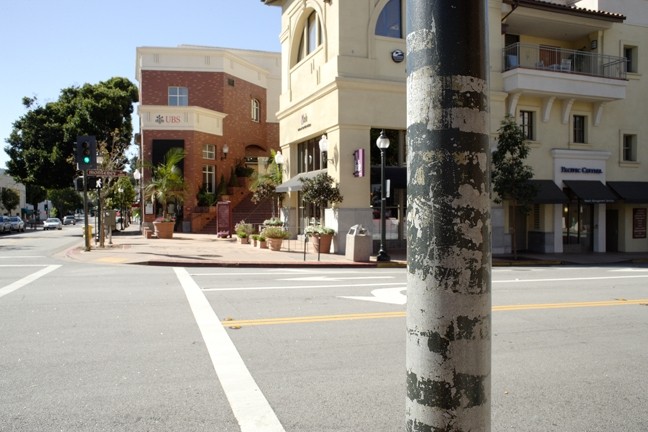 New trashcans and magazine racks downtown. The repainting of light posts. Tearing out and replacing sidewalk-lifting trees in the “urban forest” downtown.

All of those projects, collectively aimed at further beautifying San Luis Obispo’s vaunted downtown, are in line to receive scarce dollars in the next budget cycle, to be finalized in June, as other priorities go unfunded. That, at least, is based on the results of two April goal-setting meetings.

At least $800,000 is slated to go toward downtown improvements even though, as a goal, downtown beautification ranked eighth out of eight goals the city sought citizen opinions on in a September 2008 survey. The survey sought opinions on how to spend new revenue collected from a  half-cent sales tax increase voters approved as part of the 2006 Measure Y.

Still more money is slated for downtown paving and other projects elsewhere in the budget documents.

By contrast, open space preservation, which ranked as the second-highest priority among surveyed residents, has been tentatively budgeted to receive just a little more than downtown improvements; it will receive $1,072,500 for the next two years.

To former SLO City Mayor Peg Pinard, the news is more of the same. Pinard expressed concern in February because “downtown improvements” were listed as a “Measure Y priority” in recent city mailers. It was never listed as a priority, she noted, when voters approved the sales tax increase.

Pinard has been an outspoken opponent of the sales tax measure since it was placed on the ballot, and she remains highly critical of the city’s use of funds.

“Do you think the voters would have approved a half-cent tax increase,” Pinard asked rhetorically, “if the city had said they wanted to buy new trashcans?”

As a goal, downtown improvement is on track to receive more money than all but three other goals.

In other words, new trashcans become a priority, while the city plans on cutting almost every project that is not in progress. Direct Measure Y promises, such as increasing neighborhood police patrols, are not being funded.

The city has surveyed residents periodically to find out how the people want their money spent and the annual surveys show roughly the same results. Street repair, traffic congestion, and open space preservation—all original Measure Y priorities—remain three of the goals rated highest by citizens.

Those goals got the bulk of funding this year, but many other goals all but fell off the radar, including public safety and the neighborhood patrols.

The drama plays out as the city is trying to close the gap on a $10.4 million budget shortfall, which so far has meant many construction projects have been put on hold and the city has officially imposed a hiring freeze.

The shortfall is a result of falling sales tax and hotel revenues and unexpected costs, including $5 million for city police salaries following an award by an arbitrator.

According to city staff, the pain would be much worse without Measure Y.

Yet in light of the shortfall, the tax monies have become an all-purpose supplement to the general fund.

City Finance Director Bill Statler said the bottom line with Measure Y is that it was a general fund measure—meaning no matter what the city said the money was for, it can be spent on anything. There is no earmarking, there is not even a separate “Measure Y fund” to track the spending.

Council member Andrew Carter said that downtown is basically the heart of the city, so it makes sense to protect it. He pointed out that in open-ended surveys, protecting downtown has consistently been one of the top ten priorities among residents.

“I’m concerned that there’s not more money there,” Carter said, referring to neighborhood code enforcement and public safety, “but like I said, the process isn’t over.”

The council will see a preliminary financial plan on May 28, followed by another budget workshop on June 4.

“We are trying as best as possible in these trying financial times to honor Measure Y,” he said. Carter pointed out that the last time the budget was tight, the city cut open space funding almost completely. The fact that the city is struggling with a $10 million gap and still considering more than $1 million in funding for open space, he said, means that Measure Y dollars are being put to use as they were intended.