Years of cheers: Spiced old-timey cocktails will get you in celebration mode

Whiffs of Christmas escape from a freshly opened jar of cloves as fingers awkwardly pull the protective seal from it. Tapping it into the mixing bowl, the ground spice lands on top of cinnamon, nutmeg, butter, and brown sugar.

Once blended into a creamy paste, dollops of the hot buttered rum batter will get dropped into the bottom of mugs with cinnamon sticks, spiced rum, and hot apple cider. It tastes like winter on a sledding hill. Waiting by the fire with a mug in hand for your turn to take a ride down to the bottom. Nostalgia in a cup.

There are so many recipes out there. Some call for ice cream or vanilla or variations on spices. Most list boiling water instead of hot cider, but when else are you going to drink hot apple cider with rum and butter in it?

Apparently this little cup of joy predates the United States of America, with origins somewhere in Europe, a little help from the spice trade, and the colonization of Caribbean islands (that's where the rum comes from). But Americans and hot buttered rum have had a pretty cozy relationship for centuries, and there's no question that it's a warm holiday delight.

Just thinking about it made me wonder what other cozy adult beverages have existed synonymously with the season of giving for time immemorial. And surprisingly, a lot of them have raw egg in them—which is harder to work with than you might think.

A quick gander through the big red cocktail bible that's been around for more than 50 years, the Mr. Boston Official Bartender's Guide yields more recipes than anyone could ever make in their lifetime. But they are old school. And it's 2019, people—books alone are no match for the internet. Between the Google and Mr. Boston, I did find a few cocktail recipes to try—and not all of them were successful.

At the prodding of Staff Writer Kasey Bubnash, who has fond memories of Tom and Jerry cocktails made with the batter from a place called the City Bar in Great Falls, Montana, I attempted to make the Christmastime cocktail from the 1800s. Similar to eggnog, the recipe calls for egg whites beaten into stiff peaks to be gently folded into egg yolks beaten with butter, sugar, and traditional spices.

The end result wasn't anything I would ever serve to anyone. Somehow I ended up with scrambled batter. Paul Hollywood from The Great British Baking Show would be so disappointed!

However, I successfully made eggnog from scratch—using egg whites whipped to peaks and almost the exact same egg yolk mixture listed above, so I'm not sure what happened with Tom or Jerry. And I figured out that brandy Alexanders should absolutely come back into vogue. Popular in the 1920s, this dangerous little ditty will make you feel warm and fuzzy after the first sip.

Here are three spiced cocktail recipes of old that will give you that nostalgic feeling just in time for family to ruin your holiday buzz. 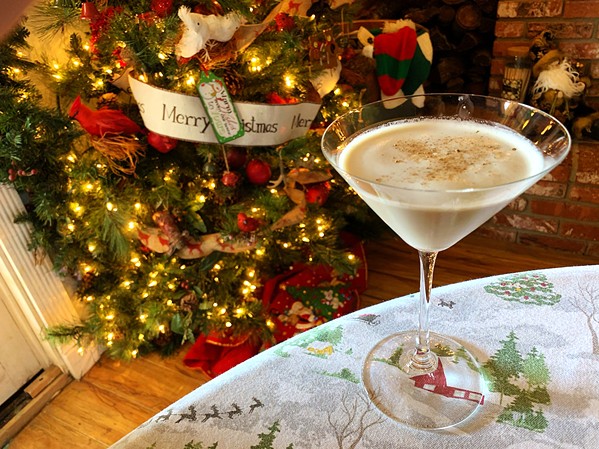 Fill a cocktail shaker with ice and add brandy, creme de cacao, and half and half. Shake it like a Polaroid picture. Strain into your favorite martini style glass and add nutmeg to garnish. (recipe from Mr. Boston Official Bartender's Guide)

Add sugar, butter, honey, and spices to a mixing bowl. Blend until smooth using an electric mixer. You can store in the refrigerator until you're ready to use. Put a spoonful of the batter into a mug, add 1 ounce—or to your preference—of spiced rum and pour hot water or cider over the top as you mix it. Garnish with a cinnamon stick. Tip: You can make these without the rum for the little ones! (recipe inspired by the Food Network) 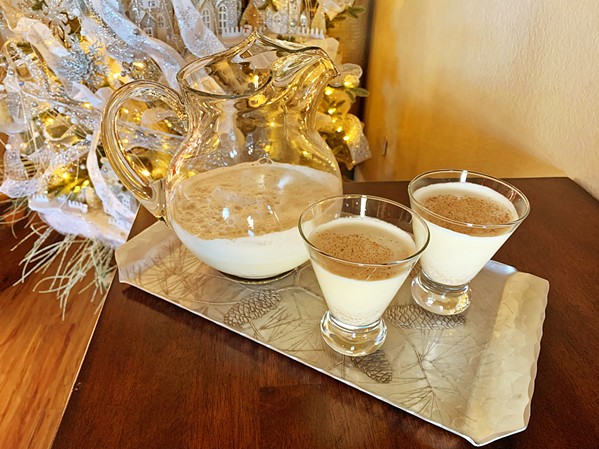 Using an electric mixer, beat egg yolks until they lighten in color. Add 1/3 cup of sugar, gradually until it dissolves. Pour in the milk, cream, nutmeg, and bourbon and mix until blended. In a separate bowl, beat the egg whites, gradually adding the remaining sugar until stiff peaks form (I had to look this up. It means beat them until the eggs are so stiff that when you pull the mixer out, the peak that forms stands straight up without bowing. Careful not to over beat them.) Whisk egg whites into the yolk mixture. Refrigerate and serve when ready. (recipe from the Food Network's Alton Brown) Δ