Yesterday is a good-natured musical charmer

Danny Boyle (Trainspotting, 28 Days Later..., Slumdog Millionaire, 127 Hours) directs this screenplay by Richard Curtis (Notting Hill, Love Actually, War Horse) about Jack Malik (Himesh Patel), a struggling musician who awakes after a bicycle accident caused by a worldwide power outage to discover he's the only person who remembers The Beatles' music. Soon he's considered the greatest singer-songwriter in the world, but will his newfound fame be a blessing or a curse? (116 min.) 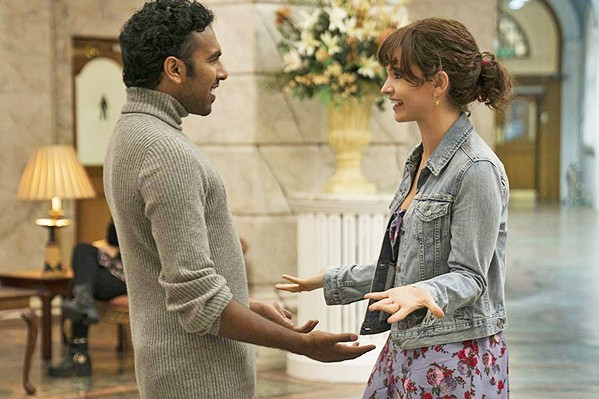 Glen This clever fantasy premise sets up a heartwarming story about a dreamer whose dream has run dry. In fact, the film opens with Jack vowing to quit music and return to teaching grade school. Even though his manager/lifelong friend, Ellie (Lily James), still believes in him and his music, she seems to be alone in her assessment. Yes, he sings pretty well and plays guitar and piano effectively, but his original songs don't connect with audiences. For every struggling artist, it's a feeling all too familiar. He loves to play, but his discouragement is palpable. He's also blind to the fact that Ellie is smitten with him. She's funny as hell and teases him mercilessly when he awakes in the hospital following his accident, missing two front teeth and his beloved beard shaved off. It's certainly fun watching him slowly realize that no one has ever heard of The Beatles. In fact, he's awoken in a reality where they never existed. When Ellie gifts him with a new guitar and he picks out "Yesterday" on it, she and his pals are flabbergasted. "When did you write that?" Ellie asks, astonished. It slowly dawns on him that he really is the only person in the world who knows The Beatles' amazing catalog. As he churns out their hits and his career balloons, he meets the singer-songwriter Ed Sheeran, who's wowed by Jack's songwriting prowess and invites him to open his tour. He also meets Sheeran's manager, Debra Hammer (a hilariously shallow and cruel Kate McKinnon), who wants to guide Jack's career. Soon, Ellie feels like Jack's outgrown her "management," and she lets him go. Meanwhile, Jack's both enjoying and feeling horribly guilty about his success, and he begins to panic a bit when a couple people in his various audiences seem to be onto his ruse. It all builds to a wonderful head as he struggles to make things right. Add to that the amazing music of The Beatles and you've got an audience-pleasing rom-com with plenty of moral quandaries to spice it up.

Anna Everyone knows a Jack—a talented singer-songwriter with a dream who's destined to be small potatoes despite it all. He's got a good group of friends; after all, they show up to gig after gig to listen to his originals, but none are as devoted as Ellie. She drives him everywhere, hauls his PA, books gigs, and tells him to toughen up and keep on. She's his No. 1 fan, and the flame she so clearly holds for him is clouded by their years-long friendship. He's friend-zoned her, and when a taste of fame and fortune comes Jack's way, Ellie soon realizes their futures are miles apart. This film is such a clever concept. Really, what would this world be without the Fab Four, arguably the world's greatest lyricists lost to the ether? What else is missing in this new world? A few things, we find out. As soon as Jack realizes that even Google doesn't know who John, Paul, George, and Ringo are, he's soon racking his brain to remember every song and lyric in the group's extensive catalog. Some are easier than others; he can't for the life of him remember if Eleanor Rigby was picking up rice or darning socks, and it's a running joke throughout the film. There's a great scene when Jack is on his way to play his first gig after the blackout when he reluctantly stops to play "Let It Be" on the piano for his parents. Interruption after interruption leave him frustrated and angry. "You're the first people in the world to hear 'Let It Be'!!! How can you not appreciate this moment!!" he shouts at them. Later when recording, Sheeran suggests a change to the outdated name of Jude, instead saying "Hey Dude" is better. Jack can't roll his eyes enough with all the 'innovations' everyone around him wants to make to the classics. It just goes to show, genius is not always recognized—like a fine wine, it can take years to develop. 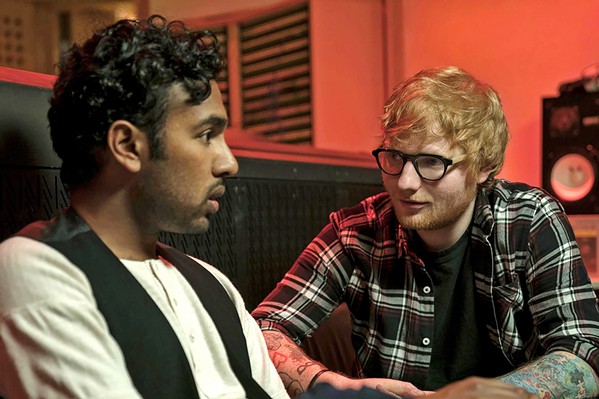 Glen We've had something of a string of inspiring musical films—Bohemian Rhapsody, Rocketman, and now this—and in Yesterday's case, viewers don't have to worry about whether the story got its facts right or if it's watered down or sanitized. This is just easy-to-like, feel-good fun, and it makes good use of The Beatles' music the same way Across the Universe (2007) did. It seems like these forays into pop music movies come in waves. Across the Universe was followed by Momma Mia! (2008) and its use of ABBA. The U.S. is a depressing place right now, and while Across the Universe and Momma Mia! distracted us from George W. Bush, this new trio has been a fun distraction from Donald J. Trump and his politics of division, family separation, and imprisoning foreign children. Yes, Yesterday is basically sitcom-level silliness and essentially a one-joke movie, but it's a good joke and the film may be just the diversion we need right now. Don't believe all the negative reviews from cynical critics. Instead, believe Rotten Tomatoes' 90-percent audience score. This is a crowd pleaser!

Anna Critics can be such downers sometimes! I had a ton of fun with this film, and yes, it's a rom-com, but so what? The music is great, the premise is pretty original, and the writing is funny. I'm with the audience on this one—it's a winner. Who doesn't love and need a bit of distraction from the world at large? I have to tip my hat to McKinnon here; her Debra Hammer lives up to her name. She's haughty and shallow and downright mean, but hilariously so. Her dreams of buying up the beachfront of Malibu all lie in Jack's breakout album, and come hell or high water, she will see him succeed or kill him trying. It's just a cute movie, and while it may not win any awards, it's certainly earned a re-watch or two by me when it makes it to the small screen. I hopped on my phone right after watching and told my mom to make sure she and my dad caught it in the theater. If that doesn't ring as a glowing endorsement, I don't know what does. Δ