SWAT and anti-riot teams stood at the ready. A tall metal fence surrounded Cal Poly’s Spanos Theatre and ticketholders who huddled together inside. Police were everywhere, even on the rooftop.

Milo Yiannopoulos, a controversial British right-wing activist, was about to speak on Jan. 31, and the community was on edge.

People had reason to worry. Less than two weeks ago at Yiannopoulos’ appearance at the University of Washington, a protester suffered a gunshot wound in a scuffle. Several of his recent campus appearances were canceled due to safety concerns, most recently at UC Davis and UCLA. 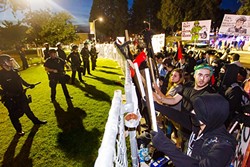 Even so, Cal Poly President Jeff Armstrong chose to accommodate the Yiannopoulos event, in the name of the First Amendment. He called it an “easy decision” to the Mustang News. But Cal Poly wasn’t taking any chances with lapses in security, and they, and the "CSU system," footed the bill for it. The total cost of securing the event, which included SLO city police support, CSU officers, and Department of Corrections officers, in addition to the University Police, was $55,400 for 109 officers.

Yiannopoulos, who’s gay, has stirred up “alt-right” activism on college campuses across the U.S. through a tour he called “Dangerous Faggot.” With hateful language coated in humor, he rails against liberal politics, women, feminism, refugees, Islam, and cultural sensitivity—much to the delight of his supporters.

By 4:30 p.m., student demonstrators—some cloaked in black clothing—gathered against the fence. One banner sign pinned to it read, “Why does Milo need a safe space?”

Together they yelled, “Education not deportation!” and, “Say it loud. Say it clear. Refugees are welcome here!” while counter-protesters donning red shirts held up an American flag across Grand Avenue.

At 5:15 p.m., a handful of press members entered the theater. Obtaining a press pass for the event wasn’t easy. The sponsoring club, the College Republicans, initially denied New Times and other outlets access. After negotiating, New Times was given one pass. Once inside, reporters were told they wouldn’t be allowed in the general admission area and could not leave the theater and re-enter.

Yiannopoulos came on stage at 6:30 p.m. to the standing ovation of a sold-out 496-seat Spanos Theatre. Most attendees appeared to be students, with some older adults in the audience as well. Wearing a blue jacket, red tie, and white shirt, Yiannopoulos launched into a talk he called, “No More Dead Babies.”

The crowd’s energy tapered as Yiannopoulos spoke about his pro-life position at length. He lambasted Planned Parenthood, saying its abortion numbers were reaching “Hitler’s body count.” The biggest applauses and laughs came when Yiannopoulos dug into left-wing politics and feminism. His closing statements on the rise of conservatism, Trump, and anti-political correctness were also well received.

“This is a moment in culture where you say enough, no more,” Yiannopoulos said. “This is your moment now. Take back culture.”

After a brief question-and-answer portion, Yiannopoulos exited the stage, having spoken for about 90 minutes. Leaving the theater, the protests outside had intensified with demonstrators yelling, “Hey hey, ho ho, Nazi scum has got to go!”

“We’re not Nazis!” a female student attendee yelled while exiting.