If I had to pick just one, I’d say my favorite song on Ynana Rose’s new self-titled debut album is the smoky, Gypsy blues tune “Fool for You.” It slinks along like a cat on the hunt, accompanied by the sultry violin work of Brynn Albanese (Café Musique), and its lyrics are wonderfully impressionistic: Drinkin’ whiskey fire/ Cotton for my tears/ Lace for desire/ Gotta find myself somethin’/ to cure these blues/ Baby, I’m a fool for you.

Ynana, perhaps best known as the lead vocalist for the honky-tonk Western swing band The Swingin’ Doors, moves effortlessly over the musical map on her new CD—from folk to waltz to bluegrass to jazz to country—all with the help of a bevy of well-known musicians, such as percussionist Darrell Voss, upright bassist Fred Murray, banjoist Dan “BanjerDan” Mazer, fiddle players Julie Beaver and John Weed, mandolinist Kenny Blackwell, accordionist Duane Inglish, celloist Bob Liepman, and even Dulcie Taylor on dulcimer.

Its lush production is thanks to co-producer Damon Castillo, who recorded the album in his Laurel Lane Studios in SLO Town.

“Being a solo artist,” Ynana said in press materials, “left a lot of room for creativity. Each song was a blank slate. Damon and I got to brainstorm about how best to bring it to life, and then look for the right musicians to bring to the studio to do that. It was a wonderful, steep learning curve. To hear musicians that you admire so much bring your songs to life is just an amazing experience.”

The star of the show is Ynana’s elastic voice that can move from husky balladry to bell-clear yodeling, not to mention the diversity of her songwriting—she penned nine of the album’s 11 tracks.

There’s a lot of lovelorn songs here—a universal sentiment—but there’s plenty of sass too, like in my second favorite song on the record, “Don’t Even Think of Leaving Me”: We can fuss Baby and we can fight/ You slam the door. I don’t say goodnight/ The sun is going down. Silence falls ’round/ And I’m thinkin’ ’bout how to get it right// I don’t worry you’ll stay away too long/ I couldn’t say who was right or wrong/ You’ll be lyin’ by my side in the early mornin’ light/ Sayin’, “Baby I just couldn’t stay gone.”

Ynana Rose plays an album release party of her debut solo CD on Saturday, Nov. 8 (7 p.m.; all ages; $10), in the Steynberg Gallery. She’ll play as a trio, but expect some of the studio musicians to show up and join in the fun. For more info, visit ynanarose.com.

Michael Franti’s appearance on Saturday, Nov. 8, at the Fremont Theater is sold out, but you can still score tickets for Ziggy Marley, playing Monday, Nov. 10 (7 p.m.; all ages; $36 to $56 at ticketfly.com and Boo Boo’s). He played Santa Cruz’s The Catalyst a couple of days ago, San Francisco’s The Fillmore on Thursday, then he’ll be in Arcata at the John Van Duzer Theatre, then Napa’s Uptown Theatre, before closing out the mini tour in our own Fremont Theater.

Ziggy, the eldest son of reggae icon Bob Marley, is touring in support of Fly Rasta (2014), his fifth solo studio album, and he recently released a new music video for “Lighthouse.” Plus, he’s just released a charity fundraising EP with the studio version of “Lighthouse” as well as a live version from his tour and two acoustic versions of “I Get Up” and “I Don’t Wanna Live On Mars”—also songs from Fly Rasta. Proceeds benefit HOLA (Heart of Los Angeles), a California nonprofit that helps underserved youths gain access to academic, athletic, arts, and college prep programs.

Ziggy, you truly are your father’s son. Bravo, rastaman!

Full house at the Brew

SLO Brew’s got a full slate for the week starting on Thursday, Nov. 6, with Mariachi El Bronx (8 p.m.; all ages; $15 presale or $15 at the door). Tijuana Panthers and Pounded by Surf open. LA-based punk act The Bronx has, for the last six years, redefined what punk means. Who else incorporates mariachi into their punk set? You’ll also dig garage, punk, and surf act Tijuana Panthers: “You suddenly realize they’re not the happy-go-lucky beach boys you tried to pin them as, but more akin to sexually frustrated soda jerks in a David Lynch film,” their bio says. 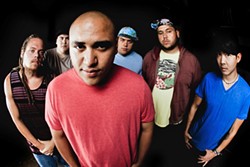 On Sunday, Nov. 9, under-the-radar pop singer Mason Jennings performs (6 p.m.; 21-and-older; $20 presale or $23 at the door) with opening act Lucette. “Singer-songwriter Mason Jennings is one of the best-kept secrets in pop music,” according to press materials. “In his adopted home of Minneapolis, his shows draw 3,000 fans. He was hand-picked by music supervisor Randall Poster to perform two Dylan songs, ‘The Times They Are a-Changin’’ and ‘The Lonesome Death of Hattie Carroll,’ in Todd Haynes’ acclaimed I’m Not There, both on the soundtrack album, and was lip-synched by Christian Bale in the movie.”

On Monday, Nov. 10, Kalin & Miles appear as part of their Chase the Dream Tour (7:30 p.m.; all ages; $18 presale or $20 at the door) with opener Ryan Beatty. Kalin & Myles forge pop and hip-hop into an “irresistible and inimitable hybrid, affectionately dubbed, Hip-Pop.”

And finally, on Tuesday, Nov. 11, check out reggae act The Green (8 p.m.; all ages; $23), whose latest album, Hawai’i ’13, debuted at No. 1 on Billboard’s Reggae Chart and No. 77 on Billboard’s Top 200 Chart. It opens with a chant. “From the times of ancient Hawai’i and even up to present day, chanting has been a part of our culture,” JP Kennedy—guitarist, vocalist, and one of the band’s five songwriters—said in press materials. “It’s a way to start something important. When we chant, we ask for blessings, knowledge, and guidance so that we can be ‘pono’ or righteous in whatever we do.” J Boog, a singer of Samoan descent, will open the show.

Wild Rabbit—a Bellingham, Washington-based folk-stomp Americana band—is not the sort of band you typically get at the Frog and Peach, but that’s where they’ll be on Tuesday, Nov. 11 (7:30 p.m.; 21-and-older; free), playing again two nights later on Thursday, Nov. 13, at Creeky Tiki (7:30 p.m.; all ages; free).

On their album The Wild North, they stomp, jangle, and clap their way across America’s roots music terrain, delivering infectious melodies laced with thoughtful and literate lyrics backed by tight instrumentation. These two nights will be the sleeper shows of the week. Don’t miss ’em!

On Saturday, Nov. 8, the Morro Bay Community Foundation will present the Sixth Annual Morro Bay Sings concert series in the Morro Bay Community Center (1001 Kennedy Way). Talented local musicians Callie Bobsin, The Angus Lewis Band, Steve Nabhan, and Judge Mike will come together to sing songs that cover areas of country music including classic, new, and country rock in this show that benefits the Morro Bay Community Foundation. The doors open at 5 p.m., and the music starts at 7 p.m. From 5:30 to 6:45 p.m., soups, salad, and bread provided by Morro Bay’s Galley Seafood Grill and Bar will be available for purchase at $10. Beer and wine will be available for purchase throughout the evening. Tickets are $25.

The SLO County Jazz Fed presents “An Evening with Internationally Acclaimed Vibraphonist Charlie Shoemake & Friends” on Saturday, Nov. 8, at 7:30 p.m. in the Unity Concert Hall (1130 Orcutt Road, SLO; entrance on Fernwood). Darrell Voss and Sean Collins will also be featured on drums and vibraphone (yes, that makes three vibraphonists!). Bassist Keegan Harshman and guitarist Shaun Fairfield round out the group. Shoemake, an alumnus of the George Shearing Quintet and a veteran of the L.A. jazz scene, has been instrumental to the success of our local jazz scene for more than two decades as a performer, teacher, and jazz series organizer. Tickets cost $20 at the door ($15 for Jazz Fed members and $10 for students).