Picking Daisies exhibits a change of pace for stencil artist

Dan Woehrle’s exhibit at Picking Daisies might, at first glance, appear to be a mash of incongruous elements. After all, the stencil artist, who goes by the moniker Stenzskull, is best known for his portraits of celebrities and musicians. But the work he’s displaying at the napkin store in The Creamery is decidedly SLO-centric, as reflected by the show’s title, “SLO as it ever was.”

“I love the idea of doing a local theme,” said Woehrle, from his garage-studio. “A lot of people like to do landscapes of where you’re from. I wanted to do something that showed where I was from but add a more modern style to it, add a little more fun.”

His take on the little metropolis is tinged with a degree of 1950s suburban nostalgia mostly done in grayscale with thoughtfully placed splashes of color that infuse the series with a dose of youthful attitude. The approach to color is a little different for the stencil artist, who traditionally works in grayscale against a colorful background.

Besides the unexpected splashes of color—a green yarn ball falling from the sky or a yo-yo exploding into lines of green, blue and pink, like the tail of a comet—Woehrle’s working method was almost business as usual. He starts by finding photographs he’d like to work with online, then uses PhotoShop to break the images down into different color layers. Then, he prints out each layer and cuts them out of cardstock.

But, anyone who’s seen some of Woehrle’s earlier pieces will notice new elements as well, tricks the artist is proudly experimenting with and refining.

“I’ve evolved a lot since my last show,” admitted Woehrle. “I’ve been working on a lot of new textures, incorporating decoupage and a lot of new paint techniques.” The piece “Mariposa de Tolosa” is probably the most obvious example of these new methods. Woehrle’s black and white vision of the Mission, with a statue of Father Junipero Serra in the foreground and an orange monarch butterfly winging by on a gust of color dashes, has the first issue of the Tribune as a decoupage background. Woehrle found the issue online and printed it out, and the only areas of the piece where the newsprint is not visible are those covered in black paint.

The piece “SLO Rollin’,” depicting a road racing vehicle dating back to an unspecified year, has sporadic bursts of decoupage rising jaggedly from behind the car like a sunrise. But Woehrle found still another way to alter the texture of the piece—with the canvas, which is actually raw wood. Instead of using a heavy coat of paint, he allowed the wood to peek through in multiple places. There are even nails visible along the outer edge.

It’s only in the last year that Woehrle has started using distressed wood panels as canvas. He buys the planks at Home Depot, and brings them to his studio where he alters them to suit his needs for a particular piece. Though it winds up being cheaper than traditional canvas, it’s considerably more painstaking. Woerhrle cites the wood’s durability and raw aesthetic as the material’s primary lure.

The centerpiece of Woehrle’s SLO collection is titled “Yo Scottie” and is inspired by a photograph of the state yo-yo champion. Looming over the Santa Rosa Market, a smiling Scottie has just released the yo-yo from his hand. The portrait of 1950’s SLO even features a few now-vintage automobiles parked near the market. And Woehrle’s touch of color? A mass of squiggles and streaks stretching out like a yo-yo tail. 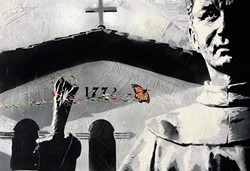 “Feline Fiddlin’” is perhaps Woehrle’s most innovative interpretation of a downtown SLO icon. Painted from a fish eye view of the Cat and the Fiddle statue, in grayscale, with dark splatters projecting from behind the cat’s torso, the image looks like a scene from a Tarantino film. A green ball of yarn falls from the sky, resting directly in front of the cat’s face.

For anyone not impressed with fiddlin’ felines, state yo-yo champions, and historic 250-year-old structures, Woehrle also has a pair of paintings of the Palm Theatre sign. And a small series of mixed tapes on wood panels. Not to mention an old hamburger joint called Ed’s Hamburgers. It might not be what you’d expect from a stencil artist. But it makes a lot of sense coming from someone who has recently taken up decoupage.