Have you ever considered signing up for a yoga class, but decided against it because you were worried you weren’t flexible enough to do it?

“It’s not about twisting yourself into a pretzel,” co-instructor Catherine Halcomb said. “It’s about having a basis to be there; it’s about the preparatory work.” 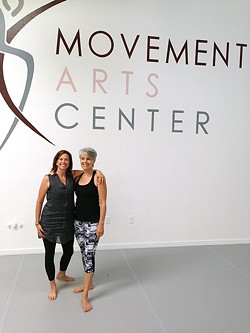 But don’t get the wrong idea. A yoga class in fundamentals is not necessarily easier.

Veteran Central Coast yoga instructors Halcomb and Shelley Massa-Gooch are back in SLO city, ending an eight-year stint in Shell Beach. The duo is offering classes in their signature “shadow yoga,” as well as restorative, beginner, and pregnancy yoga at the SLO Movement Arts Center (SLOMAC). A five-week shadow yoga basics class begins on Nov. 4.

“It’s really exciting to be back,” Massa-Gooch said.

Massa-Gooch and Halcomb have 37 combined years of SLO County yoga instruction. They are happy to settle in now at the SLOMAC, where there is a tightknit and collaborative movement arts community. The return is a reunion of sorts with old students and their families.

“I was at a SLOMAC event, watching many young ballerinas come into the studio, and I realized that a number of the mothers had been in my pregnancy yoga classes in SLO eight to 15 years earlier,” Halcomb said. “Now, here were kids enrolled in the dance programs!”

Halcomb and Massa-Gooch’s emphasis on fundamentals comes from the tenets of shadow yoga, a branch of hatha yoga. To understand what shadow yoga is, you can look at its roots.

Shadow yoga came to be when its founder Shandor Remete noticed a disturbing phenomenon: Many skilled, experienced yoga practitioners were developing physical health problems. He concluded that modern yoga was underestimating the importance of preparation, form, and core strength. Without that foundation, yoga students were vulnerable to injury.

“The yoga path uses the body as the means to cultivate greater vitality and energy within the body,” Halcomb explained. “So if your form is not strong enough to contain that energy, you can kind of spin out.”

Shadow yoga provides a solution by prioritizing the preparatory work. Now a globally recognized instructor, Guru Remete brought shadow yoga to SLO before he shared it anywhere else. Halcomb and Massa-Gooch jumped at the opportunity to work with him in 1994.

The duo met in 1995, and after years of studying shadow yoga, they started Yoga Shala together in 2007.

“It just made sense to do what we do best,” Halcomb said. “To focus on the quality of what we’d been learning and be able to offer that.”

“Each class builds on the previous class,” Halcomb said. “We take a set group, we close that group, and we work with them—for five weeks, two months, a year—so that group can truly progress.”

That’s not to say there isn’t the opportunity to simply test the waters. Yoga Shala also offers one-time, introductory classes that offer a glimpse of what to expect from the standard courses.

“That is the perfect entry point for someone,” Massa-Gooch said.

Find the class that fits you at yogashalaslo.com.