A medical cannabis cultivation project in rural west Templeton overcame its contentious neighborhood appeal on March 26 by agreeing to drastically reduce the size of the operation.

Applicants for the project on 77 acres of agricultural land near York Mountain Road canceled plans for a 3-acre outdoor grow, moved its greenhouses, and made other tweaks to capitulate to the demands of area residents, led by Ian McPhee, who had concerns about its odor and other impacts.

"We're down to one-seventh of what we started with," said Jamie Jones, who represented applicant Laura Gardner and property owners Frank Ricigliano and Sue Sullivan at a SLO County Board of Supervisors hearing on March 26. 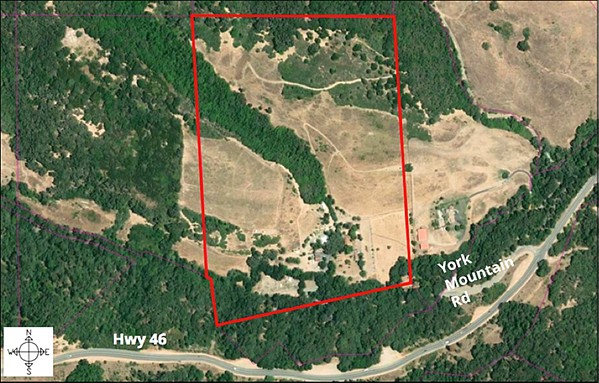 SLO County supervisors, who have discussed the appeal three times since February, unanimously approved the scaled-down project. The approval came at the tail end of the meeting, after the board took an impromptu recess to allow county counsel, 4th District Supervisor Lynn Compton, the applicant, and appellant a chance to privately meet to iron out one final sticking point.

Because county cannabis permits are only valid for five years, McPhee wanted an assurance from the applicants that they would not propose outdoor cultivation again at that time.

"When I said no grow, I meant no grow," McPhee said.

After a nearly hour-long recess, the parties agreed to a private resolution that establishes that no outdoor cultivation will occur on the property for at least 20 years.

County Counsel Rita Neal advised the board that the county couldn't condition the project for that; it had to come in the form of a private agreement between the two parties.

"I think you would be at legal risk if you condition the project on perpetuity," Neal said.

The supervisors' approval marks an end to a heated period of debate in the Templeton community over the project. County officials approved the initial iteration of the project in September 2018. McPhee filed the appeal in October.

Sullivan, the property owner, said the future cannabis farm will be partly dedicated to medical research—an idea that came from her own family's experiences with illnesses and the side effects of pain medication.

"The scientific community for a long time has been wishing and hoping that a product like cannabis would become legal so they could do the research and establish medicines that are plant-based that have fewer side effects," Sullivan said. "When we were given the opportunity to lease our property, we wanted to ensure there was a strong research and medical component." Δ