You can't do that!

San Luis Obispo voted, the sales tax rose, and city officials are looking at spending some of the projected windfall over the next two years around $1.1 million, as suggested in a recent report on beefing up the local police force.

New officers will obviously be on the lookout for lawbreakers around town, and a rookie or two might decide to make a big splash by cracking down in a big way. Think you're safe because you don't spray graffiti on parking garages or jaywalk (much)? Think again but not too hard, because this look at local laws in and around San Luis Obispo city and county isn't exactly going to land you in jail. Probably.

In 1990, San Luis Obispo became the first city to ban smoking in all indoor areas. The move was controversial, with opponents claiming it would dish out ruin for restaurants and bars, but just five years later the rest of California followed suit, and today if you rent, even your home may not be safe to smoke in. The smoking ban wasn't the first time little SLO thumbed its nose at big business. The city has put the brakes on drive-throughs and "stock" franchise architecture, banning those happy golden arches even "attention getting devices" such as balloons are banned and subject to "immediate abatement" under SLO's municipal code.

Fact is, so many things really are illegal in SLO and its surroundings, it's created a fertile Petri dish for rumors of other, really off-the-wall laws, such as group housing laws that ban more than 10 girls from living together (it would constitute a brothel) and high-heel bans (the city might get sued if somebody tripped). These turned out to be rumors, but it seemed time for an investigation into what you really can and can't do in SLO.

# Sixty minutes. That's it. Sit for more than an hour in San Luis Obispo and your behind is breaking the law. And the city can hit you in the wallet. Ever since the Transient Task Force decided to end homelessness in SLO, this law has been one of the city's most potent weapons against the residentially impaired and those with weary legs. It's also illegal to sit on any combination of city benches for more than three hours per day. Tom Hanks would never have won that Oscar if Forrest Gump had been shuffled off 59 minutes into his story. "Whatever happened to Lieutenant Dan?" we'd all be wondering.

When the law first passed in 2006, police say there was a flurry of citations. Since then, the city's shiftless seem to be shifting at hour intervals, and tickets are down. If you get caught resting on your laurels for 61 minutes, a ticket will cost about $100. The second time will cost you $200, and a third infraction will cost you $500. The plan was backed by the Downtown Association and Chamber of Commerce.

# Has SLO County learned nothing from Kevin Bacon? Like you can't stop kids from dancing, or that rock-n-roll doesn't make kids go bad that it's parental tyranny that makes kids lose control? Maybe SLO leaders never saw Footloose, because here we sit, not daring to tap our toes for fear that the Sheriff's iron fist will come crashing down on our illegal dance halls.

Yes, SLO County has a ban on dance halls dating back to 1941. Although county officials aren't exactly sure where the law came from, it may have been passed to combat prostitution and over-the-top revelry of WWII soldiers on leave. Other records point to statewide bans to enforce the drinking age and crack down on something called "Taxi Dancing," a line of work for women to act as dance partners, for a price per dance.

There's not an all-out ban on dancing the code only prevents women from being employed as dancers, dance instructors, or anything other than a ticket collector in a dance hall setting, effectively banning go-go dancers, club-sponsored synchronized dancing, strippers, and any dance being taught by a woman. Sgt. Brian Hascall of the SLO County Sheriff's Department said the law has never been enforced during his tenure.

Inside the city, a no-dancing policy has been enforced at venues without a permit. McCarthy's Irish Pub has a strict no-dancing policy, and if you're caught shaking it, they'll kick you out. McLintock's patrons, however, report a fine line between wiggling and dancing during live music.

"We do have live music sometimes," said McLintock's manager Dave Maltee. "We don't encourage people to dance, but I don't think we've ever kicked anyone out."

# Sure, reading is fundamental, but so is personal hygiene, and friends of the library will be asked to leave if their body odor is found to be offensive. The law cites "having body odor constituting a nuisance to other persons or any other behavior that unreasonably disturbs and inhibits others from using Library buildings, materials, or services" as the big offense. So the smell must be so rank as to disrupt business as usual before you're asked to leave. The rule passed in 1994 as part of the countywide library rules of conduct was officially adopted by the county two years ago. SLO City-County Library Director Brian Reynolds said it doesn't happen all the time.

"Once or twice a year someone will stink so much that other patrons will complain," Reynolds said, "in which case we ask them to leave. We give them a flyer that has a list of laundry services, and showers they can use. They can come back later that day."

Reynolds said that a disruptive smell is one that can be detected from a "normal human social distance" of 3 to 5 feet.

"Sometimes it's so bad," Reynolds said. "We have to launder the chairs."

In case you were wondering, it's also illegal to play games, go barefoot, or for businesses to hold private meetings in the library especially in the Bookmobile.

No drive-throughs?
SLO CITY DESIGN GUIDELINES 3.4
Hamburger rights are being trampled in SLO and something should be done about it. Just ask SLO Mayor Dave Romero.

"I believe we should revise that law to allow mothers with small children to be able to get a hamburger and not have to take their kids in," Romero said. "For me, that's a ridiculous law."

For more than 30 years, drive-throughs have been banned in San Luis Obispo city limits.

Romero said the law was hatched in the energy-conscious 1970s, when officials wanted to reduce car idling, but it's no longer sensible. Many simply don't like the way drive-throughs look, too, he notes. Romero said he'd personally love to see an In-N-Out Burger in town, so changes may be ahoof. And who knows what'll happen when the Dalidio project finally gets underway? 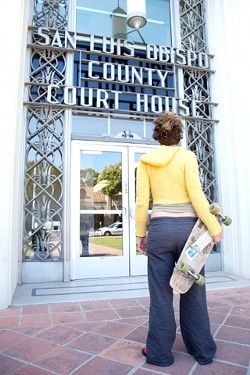 # jaywalking, and baby-jogging stroller moms. Clearly the biggest menace to downtown traffic is skaters and their thug relations: the rollerbladers.

Skateboarding, roller-skating, and those shoes with wheels in the heels are all banned from downtown SLO. Capt. Dan Blanke of the SLO Police Department said that there's just no place for them on the sidewalk, the bike lane, or the street.

Blanke also said that the skate ban's boundaries are clearly marked at Santa Rosa Street, Palm Street, Nipomo Street, and Pacific Street but SLO city skaters know well that police hassles don't stop at those borders. Even with wheels, skaters get no respect: They're not traffic, they're pedestrians who can't use the sidewalk. Capt. Blanke said that because they move so much faster than normal foot traffic, rollers pose too big a threat, especially to the elderly and the very young.

And since the SLO County Courthouse has caught up with the rest of high security in this post-9/11 America, you can't even bring skateboards inside, lest they be brandished in aggression.

Give me the keys
SLO CITY CODES 5.20.191 and 10.48.030
You might think the bar is held pretty low for taxi drivers, but the application alone makes tax season look like summer vacation. Among other things, you must possess a valid chauffeur's license and have fewer than two misdemeanor hit-and-run convictions (evidently one hit-and-run is okay). As for alternative transportation: According to city ordinance 10.48.030, you can't operate any animal-drawn vehicle in downtown SLO. The rest of the city, Capt. Blanke said, is fine. In fact, he noted, SLO has at least one horse-drawn carriage company, mostly used for special events. Just don't let the horses skateboard.

Catch a wave somewhere else
SLO COUNTY CODE 11.28.010
You can't blame the county for wanting to keep surfers from cozying up next to piers, what with the fish hooks baited to attract wild animals and the barnacle-laden pillars, but the fact is the piers create sandbars. Sandbars create waves. Waves attract surfers. Sorry, though: It's illegal. Never mind shooting the pier, you can't surf within 50 feet of it.

Fun is fun, but don't go overboard and try to tow more than two water skiers at Lake Lopez, especially not in a pyramid. Park Ranger Don Melin said it's mostly a safety issue.

"It's too hard when you have a third skier," Melin said. "The guy in the middle just kinda gets bounced around. We rarely have to enforce that that was like from the '70s and '80s."

Off the water at Nacimiento, you can have a good time but at a reasonable volume, please. And watch your language. The use of obscene or "boisterous" gestures and language inside the park is strictly prohibited. It's also against county municipal codes to get on a soapbox. Without a permit, you may not "harangue" or make any public demonstration.

"It just prevents the public from coming into the resort and being a nuisance," resort spokesman Dustin Heath said. "Being obnoxious, and making a scene. Usually, we have a strict zero-tolerance policy. We will just ask you to leave."

You can say that again
SLO CITY AND COUNTY CODE

# HIGH-gare-rah? Hi-GARA? Hig-ERRAH? Hi-GUER-a? A quick and unofficial New Times poll revealed that absolutely nobody is correctly pronouncing Higuera, which puts the street in violation of the city's municipal code 12.32.110 on naming streets, which states that all street names should be pleasant sounding, easy to pronounce, and easy to spell.

Higuera means "fig tree" in Spanish, and it should be pronounced more like "EE-guer-a." As for Chorro Street, county municipal code 20.03.32 dictates that all proposed street names should come with an English translation that covers the literal and common-use definitions.

Chorro has a few explanations, ranging from a trickle or spurt of water to a jet, as in jet propulsion. Chorro Street was named for the creek that runs through downtown SLO, but and those of you familiar with colloquial Spanish are already smirking "chorro" also refers to a different kind of spurt or trickle. One of bodily excrement. Yes, we're talking about diarrhea.

And also
7.08.050 You can't shoot a bow and arrow in Los Osos, unless it's at a dangerous predatory animal.

8.04.250 No spoons in the sugar! Lump and packaged sugar only at restaurants.

6.28.060 No bunnies as pets in SLO city. If you got one for Easter, don't ditch it, though. Eat it. Just kidding. Find it a good home outside of these borders.

Model citizens
That's contributor Kylie Mendonca at the courthouse, Editor Ryan Miller on a bench, and both of them in the library. They'd never skate, sit, or smell where they weren't supposed to.

Kylie Mendonca always follows the rules. Let her know what you think at kmendonca@newtimesslo.com.