Local krewe Beleza Sol gets into the spirit 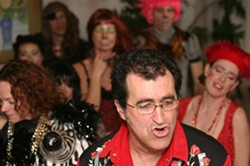 Call it serendipity. It’s Saturday, Feb. 6, and I’m in Costume Capers picking out some sweet threads for this weekend’s ARTI Gras event at Madonna Inn on Saturday, Feb. 13 (call 544-9251 to see if there are any $75 tickets left).

In pops George Griffin, who’s late returning a costume he rented last weekend. George asks if I got invited to the party tonight hosted by Beleza Sol Mardi Gras Krewe.

“Well, I’m hosting it at my house,” says George. “You should come by. The theme is Wild Things.”

I know what you’re thinking: “Mardi Gras? I thought the city slowly strangled it—first by jerking around the parade time, then by passing a nudity ordinance just for the event, and finally by trying to force the krewes to pay ridiculous fees to price the event right out of existence.”

Stop enjoying the mental image of a leather-clad Chief Deb Linden grinding her heel into a squished and bloody rodent, readers! My point is the Mardi Gras spirit can’t be crushed.

Linden and her bare-boob-haters might have driven a four-inch stiletto into that little mouse’s heart, but like some vampire, it rose from the grave, painted its face, threw some beads around its neck, put on a feather headdress, grabbed an adult beverage, and is still shaking its groove thang.

So here I am at George’s and a very sexy catwoman slinks over and says, “Why are you taking notes? I heard Glen Starkey was going to be here. You’re not Glen Starkey are you?”

“It’s too expensive,” purrs Brianna, which turns out to be catwoman’s name. “Oh, don’t write that down. It’s a fundraiser for ARTS Obispo, so it’s for a really good cause.”

“Aren’t you mad at Arts Obispo for co-opting your Mardi Gras ball?” I ask. “Why don’t the krewes host the ball anymore?”

“Because we don’t throw a party for ingrates,” hisses Brianna.

Bad kitty! Down! Down! 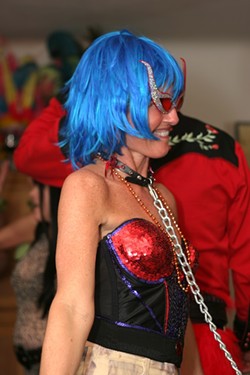 Just then all-in-red Liz, who’s living in sin with George, comes over and throws a string of fiery red beads over my head, saying, “That’s because wild fires spread.”

“George is waiting for me to give all my beads away,” coos Liz, lifting the remaining tangle of beads to reveal her décolletage beneath. Wild fires are hot, people. Real hot.

“There it is,” says George, looking delighted as he finds his misplaced drink on top of the armoire in the living room, which has been cleared out for the dance floor. The 30 or so people of Beleza Sol line up and start crawling through each other’s spread legs like the childhood birthday game favorite, the spanking machine. I kid you not!

The dancing’s going full force when I meet Lulu from Trenton, New Jersey. In her best joisey accent, she’s telling me how she wants to be on The Real Housewives of New Jersey, and then we’re dancing, and then she’s saying, “Mardi Gras is alive and well in San Luis; it’s just underground,” and then something about how Beleza Sol’s official farewell is to squeeze each other’s butts. Seriously, I’m not making this stuff up!

I’m also not kidding when I say a girl named Kyle walks in with a dog collar around her neck attached to a heavy chain being held by Francis, yet another safari guy. I remember them from the X-Ball a few years ago.

“Remember how you made me lick whipped cream off of Kyle?” I ask.

“Made you?” shoots back Francis.

“We met at farmers’ market,” says Francis. “The first thing she said to me was, ‘Can I run my fingers through your hair?’ Can you guess what I answered?”

For the record, Francis had long, beautiful hair, which is now cut shorter. I meet one more safari guy, Wade, who’s armed with “three pistols, two rifles, and three blades.” He also has a flask of Wild Turkey. That brings the count of safari guys to five.

After some more dancing, I decide I better head home, so I thank George and Liz for hosting, yell “See you all at ARTI Gras” to the krewe, and make my way through the dance floor and out the door, my butt getting squeezed all the way out.

Glen Starkey takes a beating and keeps on bleating. Contact him at gstarkey@new timesslo.com.