You could soon be paying more to get rid of your trash.

On Sept. 27, San Luis Obispo County supervisors are scheduled to vote on three proposed rate increases to garbage service in the unincorporated areas of the county. The items are on the supervisors’ consent agenda, which are often passed easily with little discussion.

If approved by supervisors, the rate increases would coincide with those of incorporated cities, which have adopted similar increases. 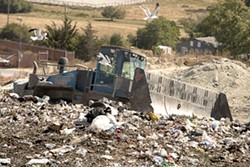 The largest increase would go to the South County and Five Cities area, where the county is proposing to bump up garbage rates by 5.15 percent for Avila Beach, rural Arroyo Grande and Halcyon, the Nipomo Bluff area, and the Nipomo Mesa Area. The city of Grover Beach already approved a 5.15 percent increase, and the Arroyo Grande City Council is scheduled to pass the same increase in November, according to a county staff report.

Supervisors are also scheduled to vote on an increase for the areas covered by Mission Country Disposal: 4.32 percent for San Simeon, 3.16 percent for the rural areas outside Morro Bay and Cayucos, and 4.51 percent for Los Osos/Baywood Park.

On Oct. 18, the SLO City Council is scheduled to adopt a garbage rate increase of 4.62 percent for residents, which will be reflected by a proposed county increase covering the SLO County Regional Airport, country club, Evans Road, Davenport Creek, and rural areas around the city of SLO.

If approved, all of the rate increases will go into effect in November.