'You forfeit my malevolence forever!'

The Rivals, staged by PCPA, is still bitingly funny

Somehow, PCPA’s current staging of The Rivals, Richard Brinsely Sheridan’s 1775 comedy of manners, has a distinctly contemporary feel to it. On the one hand, the play, set in Bath, England, is the definition of a period piece, a fact underscored by PCPA’s resplendent costuming and simple yet ingenious set design. The play’s language sounds frivolously florid to modern ears, and yet it crackles with ageless wit. And as if to best bring this across, the show’s actors often employ a startlingly modern vocabulary of movement: I can easily picture a young Jack Black in the antics of Bob Acres (Evans Eden Jarnefeldt) and traces of a buddy comedy in the physical rapport between Faulkland (Tony Carter) and Capt. Jack Absolute (Quinn Mattfeld), who drops archaic one-liners with a near-flawless accent, then tops them off with a kind of “What now?” gesture, like he’s just won a rap battle. 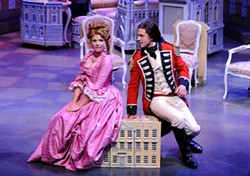 Either these modern parallels are by design, or the cast has been watching entirely too much television. Either way, I don’t care. It’s working. This show is hilarious.

In The Rivals, directed by Patricia Troxel, the beautiful, rich Lydia Languish (Stephanie Philo) is madly in love with a dashing, penniless fellow called Ensign Beverly—against the wishes of her frumpy aunt, Mrs. Malaprop (Kitty Balay). However, Mrs. Malaprop—a character whose habit of using big words incorrectly gave the English language the term “malapropism”—is convinced that Lydia should marry the wealthy and well-bred Capt. Jack Absolute. Lydia will not hear of it. Neither woman realizes that Beverly is Capt. Absolute under an assumed name.

Meanwhile, Sir Anthony (Erik Stein), Capt. Absolute’s old, harrumphy father, is clamoring for his son’s marriage to a lady who turns out to be none other than Lydia herself.

Also meanwhile, Capt. Absolute’s chum Faulkland (referred to in the show’s program, I might add, as his “BFF”) is fussing about whether or not his beloved, Julia (Andrea Hilbrant), loves him back. Faulkland is something of a dunce cap in this area: Julia does love him, but is repeatedly infuriated by his childish displays of mistrust and insecurity. They will spend the rest of the play working this out.

There’s more. Bob Acres, an acquaintance of both Faulkland and Capt. Absolute, is in love with Lydia, too. The same goes for Sir Lucius O’Trigger (Peter S. Hadres), only Sir Lucius thinks she’s “Delia,” a mysterious woman from whom he’s been getting letters. Letters with intriguing misuses of large words. I smell a farce! I might also note that Lydia’s maid Lucy (Jacqueline Hildebrand), who delivers letters between all of these confused people, is more conniving than she seems.

Are you still following this? Capt. Absolute realizes the woman his father has been roaring for him to marry—the very same woman his father had tauntingly claimed was some great lumpy creature with one eye—is actually the dazzling Lydia, the woman he loves, who knows him as “Beverly.” However, Capt. Absolute still refuses to reveal his true identity to Lydia, fearing that, were she to discover her lover is no penniless romantic after all—and instead is a well-bred gentleman of whom her aunt would approve—all of the magic would be drained from their passionate affair.

Somehow, this plot fills almost three hours of stage time without lagging. For anything to happen, a great deal of talking seems to be required, whether in the form of soliloquies or witty dialogue between characters. But it’s the conversations that make this play what it is.

That, and a cast with impeccable comedic timing. As Capt. Absolute, Mattfeld’s mannerisms are often weirdly funny. In one scene, having made a point in an argument with Faulkland, Mattfeld lets a beat go by, opens his eyes and mouth wide, hisses at him like a feral cat, then turns on his heel and storms out. The absurdity of this action catches everyone off guard.

In the face of his father’s tantrums, however, Mattfeld’s Capt. Absolute mostly plays it straight. Oh, and such tantrums! Stein, as Sir Anthony Absolute, seems always about to keel over from the exertion of being such a pompous windbag. He lurches about unsteadily, loudly dispensing admonishments. There’s a priceless scene in which Sir Anthony chastises his mortified son for being too “lively”—at this word, Stein holds his walking stick erect, thrusting it forward and guffawing obscenely—with Lydia.

Some of the biggest laughs come from Kitty Balay’s turn as Mrs. Malaprop (a character to whom Capt. Absolute-as-Beverly refers, in his letters to Lydia, as “the weather-beaten she-dragon who guards you.”) The way a straight-faced Balay dismissively spits nonsense lines like “There’s an intricate little hussy for you,” proves just how very seriously Mrs. Malaprop takes herself.

(I thought this name to be mere coincidence—“fag” doesn’t have a homosexual connotation in England—until I learned that his character is known as “Mr Puff” in Britain. While theirs is certainly a more genteel version, the meaning is the same.)

The Rivals’ ostensibly fluffy plot is also surprisingly lacerating toward the conventions of society. Dreary British ideas about “what becomes a lady” (reading is certainly not on that list) and whether one should marry for love or out of familial duty are heartily made light of. And, fittingly for a work written by a 23-year-old, the play also brims with youthful glee and what must have passed in 1775 for scintillating sexual innuendo.

Today, of course, these things only sound vaguely, distantly dirty. Lydia, in a hurry to hide her smutty romance novels, commands her maid to “Put The Man of Feeling into your pocket!” which means whatever you think it should, I guess. Otherwise, though, The Rivals’ brilliant humor holds up startlingly well.

Arts Editor Anna Weltner is a dynastic writer with mastiff potential. Contract her at aweltner@newtimesslo.com.