You have a filthy mind

And artist Robert Burridge wants you to know that about yourself

As a second grader, Robert Burridge was terrified of burning in hell. His sins, he’d been told, were numerous, and included looking out the window during Catholic school and something about harboring “impure thoughts.” 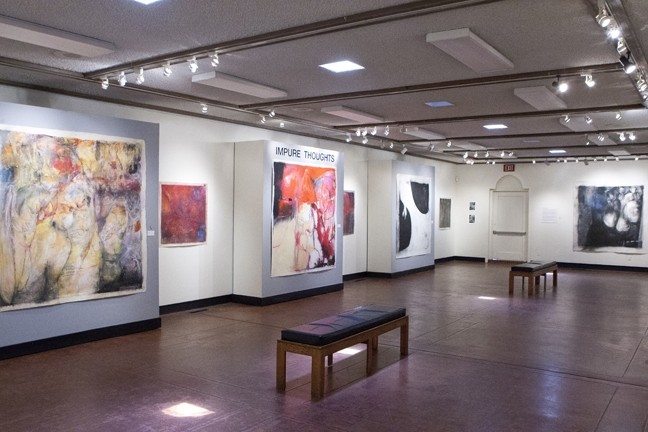 To his great relief, however, the confession booth offered an easy solution.

But when the meaning of the phrase eventually sank in, it left Burridge more bewildered than before. How could he choose his thoughts? How could a thought be a sin?

Those questions would eventually lead Burridge to create the series “Impure Thoughts,” large-scale abstract works in chalk, ash, powders, and pastel, which currently hang at the San Luis Obispo Museum of Art.

But a lot of other things had to happen first. A shy boy with a speech impediment, Burridge would slowly gain confidence by inventing his own magic tricks and putting on shows in his family’s big wood barn. He would learn juggling, ventriloquism, and circus acrobatics. He would suspend his bike from the barn’s rafters, light it on fire, and do stunts on it. His introduction to drawing, in fact, would come from creating posters to advertise his performances.

He would grow up. He would graduate from Philadelphia’s University of the Arts with a degree in industrial design and a minor in fine art painting. He would grow a ’70s mustache. He would design brain surgical drills, a hands-free dryer for public restrooms, sound editing consoles for the film Star Wars, and the circuit breaker that controls the electric fences in Jurassic Park. And when he wasn’t designing, he would paint. In 1985, Burridge would retire from industrial design completely, becoming a full-time artist. 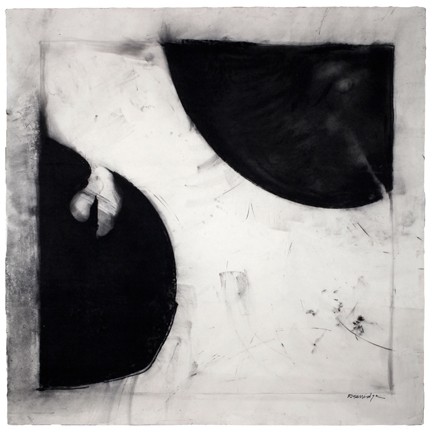 The majority of Burridge’s earlier paintings were representational—still lifes, landscapes, and an entire series of hearts. But over the years, the artist loosened it up, easing gradually into abstraction. His series “Wingland” and “Roadside Attractions”—the latter depicting the circus performers he’d emulated as a boy—show signs of a bolder, messier, more playful approach. Here is the kid again, the kid with all those impure thoughts.

While Burridge took inspiration from the frescoes of Pompeii and the erotic art found in Hindu temples, there are no direct descriptions of the human form present in “Impure Thoughts.” The series is totally abstract—and that’s why it gets away with being so damn sexy. We admire the bold, bodacious curves in works like Body and Soul and the mouthwatering Candy; the elegant lines of what might be a woman’s hips and back in Sisters. I see a messy tangle of naked torsos and curly dark hair in BFFs. The whisper of a hand caresses what might be a supine figure in Back Bend, and I’ll bet the dangly thing in the striking Black Beauty makes you blush.

With his casual suggestions in pastel and charcoal, Burridge exploits the natural human tendency to extract narrative from nonsense, turning us all into pervy cloud-watchers; impure thinkers beyond all help.

Maybe I’m taking this all a bit too far. I don’t want you to think you’ll have to shield your children’s eyes when you go in there. But the longer you gaze into these works—some spilling over with vibrant color, others rendered in nude tones, or even black and white—the more likely your imagination is to wander.

Accentuating this effect is the sheer scale of these drawings: at seven feet, they are enormous, eye-swallowing things, towering over and embracing the viewer.

“I want the pieces just by their sheer physicality to be awesome,” Burridge explained in our interview.

Working so large provides him with a sense of freedom the artist compares to drawing on the walls. He likens the process to the first cave painters, ecstatic at discovering the communicative power of lines and shapes.

The result is both original and universal, speaking equally to the creativity of the artist as to the innate nature of the viewer. “Impure Thoughts” is compelling because it shows you you.

Which is why it disturbs me that every time I look at Tryst, I see an anus. ∆