You say hello, they say sawadeeka 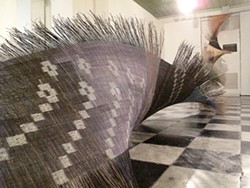 If a gallery is an environment for artists, a delicate ecological balance between blank canvas and venue with an identity reflective of its location, then Cal Poly’s University Art Gallery has its allotment of challenges. In past years it has played host to visions of ’60s and ’70s suburbia, a sugary graphic design repast concocted by a Canadian artist, and countless pieces by Cal Poly’s own students and faculty. And for one dozen years faculty members from Thailand’s Silpakorn University have exhibited their own works, created while visiting San Luis Obispo, at the gallery.

The exchange between Thailand’s foremost fine arts university and the polytechnic university has seen a flow of traffic moving in both directions; artists from Cal Poly visit Bangkok as well. The university’s president, Uthai Dulyakasem, even taught at Cal Poly at one point. Usually the exchange occurs every other year, funded by the universities. This summer five Golden State artists—three of them Cal Poly professors—traveled to Bangkok, a city just as vibrant as Los Angeles or New York though slightly less hectic and surrounded by jungle.

Michael Miller, the exhibit’s curator, is accustomed to the pros and cons of creating art in a foreign environment. He’s been part of the program for most of the past 12 years.

“A lot of people do this now,” Miller said, of the artistic exchange. “You learn to make your work portable. Mine rolls up. The first time I shipped a crate over there it took forever. The last time I was there I came up with a whole new way of making work. I think it brings about better work.”

Sometimes, part of the lesson in creating in a foreign environment is accepting accidents, and even mistakes, something Miller cites as an American weakness.

“You can fall on your face,” he admitted. “Americans never expect to make mistakes. They don’t embrace accidents. Anything that embraces spontaneity improves art.”

Each exchange features a theme. The Californians worked around the concept of water this summer. The work currently being done by the Thai artists focuses on the idea of the elemental. In the past, the Thais have had a tendency to stick more literally to the theme whereas the Cal Poly faculty turn out work with a metaphorical flare. Usually, the artists come prepared with a few ideas, as well as materials. But part of the process of creating art in a foreign environment is responding to new stimuli, making it impossible to perfectly prepare for each creative venture.

The three Thai artists who have been selected for this trip plan to work independently. Prasert Pichayasoonthorn serves as deputy director of the university’s Art Centre as well as Senior Lecturer in the Department of Ceramics and Faculty of Decorative Arts. The artist requested a black room to work with, drawing speculation from Miller that he will do a mixed media installation with some sort of projection.

For the first time in the universities’ 12 years of exchanging artists, Silpakorn is sending a female faculty member, a fiber artist named Prapakorn Sukonthamanee. A lecturer for the Department of Applied Art Study and a Decorative Arts faculty member, Sukonthamanee will almost certainly create an installation of woven materials.

Nawin Biadklang, a lecturer in the painting department and faculty member of Sculpture and Graphic Arts, will likely paint during his nine-day workshop at Cal Poly. Biadklang’s recent paintings consist mostly of beautiful women with vacant eyes, creating an impression of almost demonic beauty. Much of his work is concerned with the effect of Western culture on Thai identity.

The head of Silpakorn’s Public Art Information and International Affairs Division—Sasivimol Santiratpakde—will accompany the artists as a translator. With two PhDs under her belt and impeccable organizational skills, Santiratpakde was a key player in coordinating the 2009 exchange.

“Nobody used e-mail in their office,” Miller explained, of earlier exchanges with the university. “It’s interesting to see how digital technology shows up in their culture. It reminds me of when I was at Pomona College in the mid-’90s when everybody was being told ‘you have to use e-mail now.’”

In recent years Miller has seen a generation shift in Silpakorn faculty artists. In the earlier years, they mostly worked with a demographic that corresponded to America’s baby boomers. But the artists have been getting younger and younger, causing a shift in perspective that has affected the art they produce.

Thai culture has also infiltrated Miller’s life on a personal level; he watches Thai films, listens to the country’s pop music, and hopes to learn the language. This recent exchange should assist with that effort, as the artists will be staying at Miller’s house. Budget shortfalls have eliminated the possibility of artists remaining in hotels, as they’ve done in the past. Miller acknowledged some fear that, as the budget situation becomes increasingly dire, the exchange could be eliminated altogether. But, for now at least, it’s sawadeeka artists, followed by a sad sawadeeka in a week and a half (the word means both hello and goodbye).