Ever since Young Dubliners lead singer Keith Roberts adopted SLO County as his new home, we’ve been treated one or two shows a year from this perpetually touring band, and Thursday, Oct. 4, is their next one at SLO Brew (8 p.m.; all ages; $15 presale or $17 at the door). 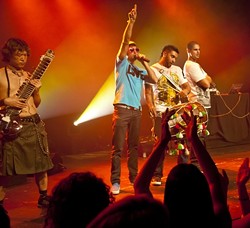 They’re wrapping up a three-month summer U.S. tour and shortly after they play here, they’re off for a month-long European tour, “ten days of which include a tour of Ireland with 100 American fans in tow,” according to their publicist Monica Hopman of Think Press. “This will be the sixth year they have made this part of the Euro tour into a ‘fan trip’ and it’s still going strong. All the information is on the website at youngdubliners.com.”

In addition, the band is working on its ninth studio album, to be released in March 2013. The new record is a long-awaited follow-up to the excellent 2009 release Saints and Sinners. Expect an evening of songs spanning all eight of the previous recordings (“Dirty Old Town,” “Fisherman’s Blues,” “Rocky Road to Dublin,” “Home,” Last House on the Street,” “Follow Me Up to Carlow,” “Scream,” “Knickers”—they’ve got tons of great songs!) as well as some new materials from their upcoming album.

On Friday, Oct. 5, One Drop and Nada Rasta will take the SLO Brew stage by storm to deliver an evening of infectious, danceable reggae (7:30 p.m.; all ages; $8 presale or $10 at the door). Expect California beach town sounds! D&A will open the show.

Bored with predictable music genres? Looking for something that’ll stretch your sensibilities and lead you out of your comfort zone? Check out this show from Cal Poly Arts. Delhi 2 Dublin is an eclectic, genre-jumping, mash-up smash from Canada that will tour through town to support its newest, album Turn Up the Stereo.

“Sometimes we just need to drown out the noise of the world by making the music louder,” vocalist Sanjay Seran declared in press materials.

Tarun Nayar, who handles electronics and plays tabla in the band, added, “We spent 10 times the amount of time and effort writing this album than we have in the past. We really tried to make everything better—from music and lyrics to production and artwork.”

The quintet delivers a multi-cultural and incendiary live show that’ll will have you wondering if you’re in an Irish pub or an urban club as they mix Bhangra, Celtic, dub reggae, hip-hop, rock, and electronica, performed on everything from sitar, tabla, Celtic fiddle, and bagpipes.

Witness the spectacle on Friday, Oct. 5, at 8 p.m. in Cal Poly’s Spanos Theatre. Call 756-4849 or go online to calpolyarts.org for $33 to $40 tickets. On a side note, this is a high volume concert, so you may want to bring—like I do every time I go to a club or concert—a pair of earplugs! Nobody wants you walking out mad because it’s too loud for you.

Molly Reeves is a sparkplug, a red-topped bundle of energy and talent that will have you firing on all cylinders. She usually fronts the Red Skunk Band, but on Thursday, Oct. 4, when she headlines Steve Key’s Songwriters at Play showcase at the SLO Down Pub (6:30 p.m.; all ages; pass the hat), she’ll be flying solo on her National Resonator guitar. Expect peppy hot jazz, blues, and more from a young gal who’s about to jump ship and move to New Orleans in November, and bring some extra dough to buy her solo CD, Swing Grass. Patrick Bang, Trevor Borden, Joe Hamilton, and Deanna Pino will also perform four-song sets.

Jetty Swart (pronounced YET-ee) returns to headline the Sunday, Oct. 7, Sculpterra Winery showcase (1 p.m.; all ages; pass the hat). “Born in the port of Amsterdam, she found an accordion between Prague and Berlin, and serenaded her way from Paris to Mexico,” according to press materials. “She sings in French and English, dreams in Dutch, travels in Spanish, and calls her music ‘a punk-style gypsy party where Nina Hagen, Edith Piaf, and Kurt Weill meet.’” Guest performers include Melody Klemin and Gary Garrett.

The big man responsible for these showcases, Steve Key, is turning 55 (looking good, man!), and to celebrate, he and a bunch of other Songwriters at Play regulars will play Tuesday, Oct. 9, at Kreuzberg (6:30 p.m.; all ages; pass the hat). Ted Waterhouse is host of the event, which includes Lost Hills, Holly Ann Phillips, Ynana Rose, Chick Tuesday, Gary Garrett, Charlie Kleemann, and more.

The Big Sur Jade Festival will deliver three days of awesome entertainment Oct. 5 to 7, at Pacific Valley School in southern Big Sur. On Friday, Oct. 5, from noon to 6 p.m., Jill Sentino will sing the National Anthem, followed by a drum circle with Tracy Morgan, then Random3, Jill Knight, and the Mighty Croon Dogs. On Saturday, Oct. 6, from 10 a.m. to 6 p.m., hear Tracy Morgan’s drum circle, Jimmy Chavez, Mowtowners, Voodoo Lounge, Higher Movement African Dancers, Brothers of Another Mother, Zzah, and the Versatones. And on Sunday, Oct. 7, from 10 a.m. to 5 p.m., check out Morgan’s drum circle, then Gillie Wheesels, Blacklight Sky, Dan Singer & Jud Davidson, Dave Adams, Rough House, and the Shival Experience. And guess what? All these shows are free!

Great American Songbook crooner Art Emr will bring his show to D’Anbino Tasting Room on Saturday, Oct. 6. This will be a must-see for wine lovers: in addition to D'Anbino’s fine wines, Adelaida, Calcareous, Opolo, Paolillo, and Tobin James will also be pouring for this fundraiser for “Helping Hands Across the Vineyards Concert,” which encourages increased community funding awareness for Paso Robles' Children’s Playground Restoration project. Let’s see, six great wineries, Emr and company delivering excellent music, and a chance to help restore kids’ playgrounds? Looks like a winner all around! Tickets are $10, or $5 for Record Club members. The show starts at 7:30; reserve your spot at 227-6800.

The 2012-13 SLO Symphony season kicked off in style at POPS by the Sea, but now it’s time to get down to business. On Saturday, Oct. 6, at 8 p.m., the symphony will present Opening Night at the Symphony at the Performing Arts Center’s Christopher Cohan Center with guest violinist David Kim, concertmaster of the world-renowned Philadelphia Orchestra. Conductor Michael Nowak will lead Kim and the orchestra through a program of Shostakovich, Respighi, and Brahms. Tickets cost $20 to $75, and are available by calling 756-4849 or visiting slosymphony.com. There will also be a “No Ties Allowed! FREE Dress Rehearsal” for those on a budget, at 1 p.m.

On Sunday, Oct. 7, East Coast saxophonist Greg Abate, formerly a star soloist with the Ray Charles band, is the next attraction at the Famous Jazz Artist Series at the D'Anbino Wine Tasting Room. Abate is known for his award-winning recordings and his mastery of the Charlie Parker school of jazz improvising. Bassist Dylan Johnson, drummer Paul Kreibich (another Ray Charles alumnus), and series co-producers Charlie and Sandi Shoemake (piano/vibraphone and vocals) will join in. There’s a 4 p.m. and 7:15 p.m. show, each for $15, or see both for $20. Reserve tickets at 927-0567.

Big Gigantic will bring its Uprising Tour to the Graduate on Sunday, Oct. 7, to deliver an evening of “mind-bending beats, thunderous bass, and frenetic melodies,” which “developed a rabid following since forming in 2008,” according to press materials. “With a provocative sound that’s as thoughtful as it is danceable, Big Gigantic’s new songs like ‘Nocturnal’ and ‘Hopscotch’ weave whirling melodies into addictive beats and samples that wouldn’t sound out of place on a Kanye West or LCD Soundsystem single. No genre is off-limits for Big Gigantic, whose breakthrough sound channels everything from funk and dub-step to house and hip-hop.” Tickets are available at broadrippletickets.com.

It’s one thing to pick up a guitar or take piano lessons; it’s a whole other thing to learn how to make a living as a performer. That’s where “Musicians as Entrepreneurs” comes in. On Wednesday, Oct. 10, in Dallons Hall on Cuesta College’s North County Campus (Building N3100; Room N3102), from 1 to 4:30 p.m., you can attend a seminar that presents the business side of music and “provides the skills and knowledge to move your music career forward. It covers the legal and financial issues affecting songwriting, recording, touring, how to market yourself and your music, and the range of DIY (Do It Yourself) tools available. Attendees will also learn about the players who influence your success and how to interact with them,” according to a press release.