Your pizza's on fire 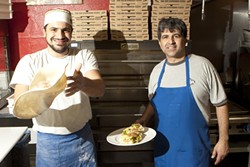 But that’s just the foundation of Firefly Pizzeria, which opened after Thanksgiving on Garden Street in the cozy brick-walled space that formerly housed Bel Frites. Owner Luciano Bardinelli and his two-man crew have cooked up a menu of pizza and other dough-based dishes, but also a host of fresh-made soups, salads, pasta entrees and, of course, desserts—Italian-style.

The dual menus have Firefly picking up on three of downtown SLO’s latest food trends: simplicity, late-night hours, and fresh specials aiming to attract the hungry. In the end, their primary goal is to offer a little taste of Italy in your backyard.

“I try to be as Italian as I can,” Bardinelli, who hails from an area near Lake Maggiore in Italy, said with some humor.

He ran restaurants in Seattle and Pismo Beach about 15 years ago, totaling some 30 years in the restaurant business. He brought with him two guys from Seattle: Roberto, who makes the pizza, and Ciro, who will probably be the first you’ll encounter and the last to forget your face.

The pizzeria resembles what you might find on the corner of a block in a big city, offering a quick bite or take-out after a long workday. The restaurant still has the same open sign facing the parking lot behind the building, and it’s continuing the location’s reputation for staying open late, which ended up inspiring the establishment’s name.

“I figured Firefly because it’s the only thing that flies at night that is visible,” Bardinelli said.

When asked if there was anything that made Firefly stand out among a few city blocks packed with pizza joints, Bardinelli was modest in underscoring that he wasn’t trying to make any claims, but was just starting a business trying to find a niche and serve up good food. “I do my own thing, I always do,” he said, placing more importance on preparing fresh Italian food and letting it speak for itself. “There is nothing to invent—Italian cuisine is 2,000 years old!”

The idea came to him during a vacation in Monte Carlo a few months ago. He saw restaurants all over the place that were featuring pizza, and while the food has been prominent in the United States forever, it hasn’t always been a centerpiece for Italian restaurants. Bardinelli said he never would have done pizza 20 or 30 years ago, but after driving by a French cooking school that taught the art of making pizza from scratch, he reconsidered. “If even the French open up a school for Neapolitan-style pizza, then, well ... ,” he mused.

Though pizza might be its main staple, Firefly also has a daily menu featuring handmade pasta and gnocchi, soup, salads, and desserts. A sample of a recent menu included potato leek soup, salads such as warm spinach with pancetta ($7) and prosciutto and melon ($9), ravioli with ricotta and spinach in tomato sauce ($11), lasagna Bolognese ($11), manicotti di ricotta and fresh herbs ($11), all hand-made, of course. Lemon tart ($7) or tiramisu ($6), as well as homemade gelato and sorbet are also offered.

The plan is to sell the specials until they run out, Bardinelli said, and then rotate something new and fresh in place. The pizza, piadine, and panuozzi will all be available until close at 2 a.m., while the specials menu kitchen will shut down at 9 p.m. Firefly Pizzeria is at 1127 Garden St. in SLO.

For now it will be the trio running the place, but once they have everything in order, Bardinelli might be looking to hire some young people who are interested in learning the techniques behind cooking traditional Neapolitan-style Italian food. In the meantime, however, customers can experience the new joint’s humble beginnings.

“It’s a new venture,” Bardinelli said. “We learn every day.”

The Make-A-Wish Foundation is seeking help on two fronts in this, the most giving season of the year: first-time gifts and unused frequent flier miles. When a team of wish-makers meets a child with a life-threatening medical condition, they bring a small gift for every child in his or her household—typically items that will eventually complement a future wish, such as retail gift cards, disposable cameras, travel board games, and portable DVD players. New unwrapped items can be delivered to Make-A-Wish Foundation of the Tri-Counties, 4222 Market St., suite D, Ventura CA 93003. Call 676-9474 to arrange a delivery time.