Your story, unwritten: Anything can happen at the Central Coast Writers Conference Book and Author Fair

Teri Bayus was a frazzled mess when she pulled her car into the parking lot of her first writing workshop some 15 years ago. Not much scared her, but the idea of putting pen to paper—and sharing her inner monologue with strangers—made her palms sweat cold, icy beads.

In another life, she had been a circus performer. She’d white-knuckled the trapeze and hurdled through the air at top speed. As a mom and foster parent, she’d given birth to human beings. She’d endured the door-slamming chaos of housing six teenagers at one time. She’d gotten into law school and walked away from that career to explore the great unknown. She was fearless, save for one exception.

“I always wanted to write, but my freshman English teacher stuck in my head. She told me I couldn’t write,” Bayus said. “So, I stopped. I believed her.”

That belief would be put to the test during that fateful 1998 evening. At the time, Bayus had just moved to SLO from Reno, but her husband hadn’t yet made the relocation. The wannabe writer was all alone, without friends, without direction, and without a hobby. Maybe she’d pick up her dream of writing again. That English teacher couldn’t possibly still hold power over her as an adult. Or could she?

“I remember it was a nighttime writing class. I couldn’t find a parking place, so I just parked in handicapped parking, and I didn’t even bring a pen or paper,” Bayus said. “The teacher—who later became my mentor—told us to spend five minutes writing about something that had just happened.”

Bayus chewed her pencil, then began to let it all flow onto the page. She wrote about her physical nervousness, her desire to pick up writing after years of self-doubt, and the fact that she felt scared and alone.

“At the end of five minutes, the teacher told everyone to stand up and read what they’d written,” Bayus said. “Half the class walked out of the room right then and there. I told my story, and the first thing she said was, ‘That was really good. You should go on from there.’”

That comment—however small—made a huge impression on the eager writer.

“It sustained me for years,” Bayus said, adding that the teacher was rumored to be a past romance of John Steinbeck. “The writers with promise, we’d meet at her house and we would read each other’s work. We became really good friends. One day, before her funeral, we realized that all she ever really said to any of us was ‘go on from there.’” 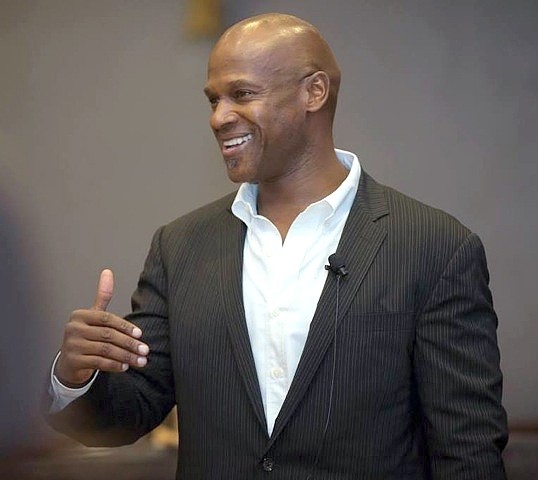 As newly appointed director of the Central Coast Writers Conference, Bayus aims to echo her mentor’s mantra. Think you’re not good enough? Go on from there. Think you can’t possibly write a zombie erotica series? Go on from there. Wherever you are as a writer—a published author or self-conscious newbie, simply “go on.” Don’t stop. Don’t feed the fear. And don’t let anyone tell you “you can’t be a writer.”

“I tell people not to be afraid, because, really, anything can happen,” Bayus said. I have to say, she really knows what she’s talking about. After a two-day LA-based screenwriting class offered through Cal Poly in 2000, Bayus penned a screenplay centering on a group of hookah-smoking teens who take over their local television station.

Thanks to a cousin in the LA area, the script got in front of the eyes of Morgan Freeman who—amazingly—loved it. Freeman’s production company optioned the story for two five year periods before Bayus took it back. Although the $32-million budget movie never got made (after 9/11, the Middle Eastern hooka was out), the experience made quite an impression. Bayus continued to write with fervor, and maintains her role as a freelance “script doctor” for Freeman’s production company. Locally, she’s served as the Tolosa Press food critic for more than 15 years. Her latest book, Consumed, is a unique tale of “culinary erotica.” Now, she’s got her first teleplay in the works.

“So much can happen if you don’t have any fear and you just keep asking,” Bayus said.

This year’s fest has “gone Hollywood” thanks to Bayus’ experience in the screenwriting world. Now in its 31st year, the festival has evolved from mostly memoir writing to a host of specific genre writing classes.

“I have an LGBT class, an erotica class, television writing, screen writing, dystopian, zombie, horror, poetry, travel, memoir, and more,” Bayus said, adding that she’s been able to capture big-time instructors like Rob Edwards (The Princess and the Frog, Frozen), Charles Web (world-renowned poet), and a comedy writer who penned jokes for none other than Bob Hope. The keynote is Karl Iglesias, a motivational speaker and author of some 16 books.

For those who have finished books or are nearly finished, Bayus offers specific marketing classes. The same goes for beginners, who can take an entire course offering of workshops geared toward their specific needs. Looking to make money writing? Want to know how to crowd-fund your next book? You can bet there’s a class for that.

“The most important thing a writers conference should do is inspire,” Bayus added.

The trick is to make sure you carry that momentum forward. At the writers conference, it’s easy to look around and know you are not alone. Sometimes that’s all it takes to get the fire stoked and roaring.

“Whether you’re halfway through a novel or you’re thinking of buying a pen, this conference will give you that ‘go on from there’ again and again and again,” Bayus said.

Hayley Thomas believes in the power of story at hthomas@newtimesslo.com.