Yours, mine, and ours

Whats in your public space?

We wanted to see something different. Stuck between endless plein air landscapes, gift galleries, an impossibly safe public art program, and a ceaseless parade of billboards, we were struck by an inexplicable urge to consume. New cars, beautiful landscapes, and attractive women were commanding our perception of the world a vacation from predigested imagery was in order. What ensued was both harder and easier than it sounds. We climbed hills, waded through unsanitary creeks, scoured tunnels and Dumpsters, and swept the sidewalks and alleys with our eyes. What we found could be defined as public art, in that it was located on public property and some people consider it art. The police also have a word for much of what we found: graffiti.

# Most people agree that tagging or marking private property is wrong. But what happens when spray paint is applied to a tunnel tucked away among the hills and foliage of the county? Or when a political message or clever stencil finds its way to a trash container or slab of pavement?

Graffiti, if well executed, is generally within the public's scope of accepted art. The most common reactions to our quest were curiosity and conversation about whether we found anything "good" or if we'd seen a particular piece. Even if people are interested in it, however, art lacking an appropriate venue can be considered criminal.

# Several larger cities have adopted graffiti-style murals for the public, and sanctioned entire walls for the free expression of would-be vandals. So are we, as a culture, saying that art must occur within a specific space in order to retain its value?

Public art: the sanctioned stuff
It really doesn't get more sanctioned than city-sponsored public art. Whether it's publicly or privately funded, every step along the path to approval is met with a heavy dose of bureaucracy which some argue is the only truly democratic means of selection. Others believe that the end result is a watered-down piece bereft of actual content. 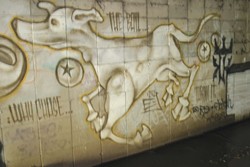 # "I should say upfront that designing a public art program, you must always design built-in participation because it has to be a democratic process," said Ann Ream, ARTS Obispo's Art in Public Places Committee chair. "You have to have many opportunities for the public voice to be heard. When there's public art and no one has had any say about the piece, it's not quite fair to our urban landscape to add something that our community hadn't had a voice in. If it's something done on private or public property without the permission of the entity that owns it, then I'm against it."

According to Ream, who's been heavily involved in developing SLO's public arts program for more than a decade, artists interested in creating public art need to get their name on a mailing list circulated by either the city or ARTS Obispo for notification of upcoming projects. The first step for an artist is a Request for Proposal (RFP), which provides every imaginable detail about the piece. An RFP gives the city all the necessary information, but leaves very little room for spontaneity. One of the program's biggest snags lies in attracting enough artists. The RFP can be intimidating for an artist who's never dealt with the bureaucracy. Most projects receive between six and eight proposals, sometimes less. 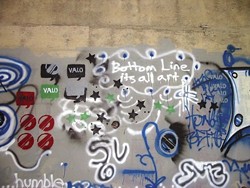 # The decision for a public art installation ultimately goes to a jury that decides what's most appropriate or, in other words, which project will appeal to the largest number of people while falling within the city's budgetary guidelines.

A number of people like Ream have invested a great deal of time into establishing and maintaining a public art system. But the artists attempting to project their work into public view find that the city's vision often supercedes their own. Allen Root, of Ferromobius a company that produces residential, commercial, and public art of a pragmatic nature (benches, railing, gates, etc.) won his first public art commission in Palm Desert in 1996. Then, in 2001, he helped sculpt the infamous Court Street benches.

# "They were built to remind us that there's a creek under the sidewalk," Root explained.

But the benches were a source of controversy, and ultimately they were removed. He also has tentative designs for a graffiti/cartoon-inspired bench in SLO, but doubts that the project would be considered acceptable given the city's current climate. 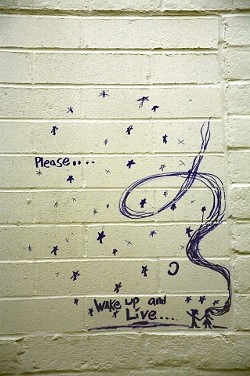 # Root has learned through experience how to cater to the city while still meeting his own artistic vision, but he would like to see the process become more user-friendly for new artists. Still, he expressed an appreciation for artists who follow a different path to public view.

"There's a big difference between graffiti and tagging," he explained. "Tagging is like pissing on someone else's territory. When it's about your gang or about your girlfriend, I don't want to see it. That's selfish. But I look at some of the stuff that's accomplished and I go, 'How do you do that with a spray can?'"

I spy many things commercial
Advertisements in the form of billboards, awnings, sandwich boards, and more are everywhere, and though they're regulated, passersby don't often question their social purpose or value. According to Doug Davidson, SLO's deputy director of Community Development, city ordinances regulate numerous criteria, including a sign's location and size, but not its content.

For most small businesses, the process of having a signage plan 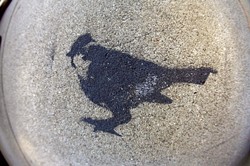 # approved by the city is relatively brief, requiring several days to a week. Off-site commercial signs like billboards are prohibited in SLO, but, for the most part, any business can obtain its own slice of public visibility. There's a body that reviews signage plans, but Davidson checks the plans first.

"We get complaints sometimes and we'll follow up to see if the sign was legally created," Davidson explained. "But basically we don't regulate content. If someone did something really crazy, we would get complaints."

It's difficult to say where non-sanctioned public art especially graffiti would be without its counter-culture, anti-consumer roots. But that doesn't mean that capitalism hasn't found a niche in graffiti culture. A tunnel in North County bears the golden stamp of a local clothing brand. Whether it's a subversive ad by the company or just work by a fan is impossible to say. And one wall of Downtown Brew is now sporting the bar and music venue's name legally compliments of a talented artist with a spray can.

"Everyone, old to young, that came by was impressed, and

# someone hanging a plastic sign wouldn't get that reaction," said GSM Visuals' Jason Ferkel, the artist responsible for the mural. "Sometimes it's hard to get people to buy into it that you really do something, especially when people find out you're using a spray can. People see a spray can and assume their property is being defaced which it is 90 percent of the time but if I was doing this with a paintbrush it would be cool."

"What graffiti is, from a police perspective, is a violation of Section 594 of the California penal code, which is a misdemeanor," said Capt. Dan Blanke of the SLOPD. "And if we catch somebody in the process of doing it, they'll either get a ticket or they get taken in."

The police usually find smaller taggings reported by angry property owners, not thoughtful, elaborate creations. On the rare occasion they encounter a more artistic piece of graffiti, however, they don't have the luxury of considering whether it's worth preserving.

"Our officers are not incapable of saying 'Wow, that person was quite talented but a vandal nonetheless,'" Blanke said. "Our message would always be that you have to respect the rights of others."

That message isn't something the police are willing to amend based on the graffiti's location.

# "Bottom line is, even if it's publicly owned property, the person wasn't invited to put that up," Blanke said. "We all own that. We all own the sidewalks of SLO.

"City administration, they don't set themselves up as the gods of public art," he continued. "Maybe, in some cases, what people put up as graffiti we might all find to be more appealing than signs, I guess. But, being a policeman, I feel like there needs to be some method of approval for all that kind of stuff because that's just the process by which we all get along. We can't all just decide to do what we want to do, which is what graffiti 'artists' want to do."

Straight from the graffiti artist's mouth
"I'm not into defacing or vandalizing," said a local graffiti artist, who asked to remain anonymous. "I would never do graffiti on someone's house or car, but as far as public property, I pay taxes."

This artist also doesn't paint over another artist's work, which he

"I've been painting for maybe 10 years now with a spray can," he said. "I've always done art. A lot of people don't understand that you can manipulate the can. It takes practice."

Even if it's a crime, the young artist doesn't understand why the police are so uncompromising.

"As for going and painting in a tunnel, who's going to see it?" he asked. "Artists that go down there and maybe some bums, but who else? Painting under a bridge doesn't affect anyone. It's not hurting anyone. It's a use of space that's not being used. There's worse things in this world than painting stuff."

Matt Hoffman shares this graffiti artist's taste for public space, but Hoffman incorporates public space into his art in a slightly more expansive way. The painter has been responsible for several impromptu installations including a self-portrait in Bubblegum Alley and a few stencils all of which he defends as a form of community dialogue.

"My theory," he said, "is that if an individual participates in their community they will earn an invested interest in their community. I practiced this when I did Bubblegum Alley. The community chewed the bubblegum, and many individuals feel as though they were a part of its creation. This instills a sense of stewardship in one's community."

The difference, Hoffman explained, between what he does and

# someone who just writes his or her name somewhere, is thought.

"Much more thought," he said. "I ask, 'Why would I be doing it, and what would I hope to achieve?' There are more altruistic goals. I'm trying to engage the community, and I'm contributing, maybe not in the way they would like, but it's going to elicit something more than irritation."

In another social art experiment, Hoffman hung a handful of paintings from a horizontal pipe in an alley. He and his friends served pastries and coffee for five hours, then picked up and left.

"I am a proponent of thoughtful and considerate use of space for artistic expression, even if it does push the boundaries of what is acceptable," Hoffman said.

The last word
Admittedly, part of the fun is finding art. A good stencil or spontaneous sculpture can set into motion a series of questions: Who made it? How was it executed? What did the artist mean?

And though everybody seems to have an opinion about whether non-sanctioned public pieces really are art, nobody seems to be taking the time to discuss or establish a definition of art or whether a conservative arts community has a place for pieces created illegally (aka spontaneously).

The true test of what careful observers find might be said to lie, not in content, quality, or venue, but in the discussion it provokes.

For this type of art tour, the dress is casual, you have to bring your own wine and cheese, and you should watch out for cops. Bottom line: If you want something different, you have to be creative, and if you want freedom of expression, you have to buy it.