Mr. Bob Zany - if that is his real name - comes to the Central Coast to make us laugh

New Times Tell me about this traditional Thanksgiving show you are doing at Spyglass.

Bob Zany I’m bringing people on stage and hypnotizing them and then& they think I’m funny.& I am doing it without the chairs, since traditionally hypnotists put like 12 chairs up. I am making them stand so they fall down laughing. It’s kind of old-school meets new-school with a gets-kicked-out-of-school chaser. 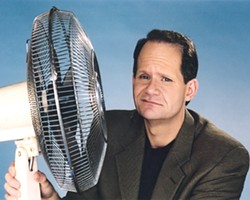 New Times [laughter] You’re on the board of Canadian Mist? They came to SLO, you know. And what do you mean you’re on the “board?”

Zany Yeah, I enjoy Canadians, they have done a lot of Canada and they keep what they do in Canada, which means the world to me. And I get misty thinking about it—Canadian Mist—so you can see how the whole thing came together. I usually do the tour.

New Times What are you wearing right now?

Zany What am I wearing right now? Shorts and a sports bra and I have my poster of Brandi Chastain on my wall.

New Times What, who? Anyway, Glen Starkey wants to know, did you make out with Matt Damon in your upcoming film, The Informant?

Zany No, I didn’t. We are both heterosexual and I can see why there would be an attraction towards me because of the gifts that I present.

New Times This sounds like a very serious film...what role could you have possibly played?

Zany I play a snitch no, I’m kidding.& I am playing an attorney so I guess I do play a snitch. I play Matt’s attorney and all of my scenes are with Matt. I’m advising him on what to do and I’ve realized what he’s done and I’ll leave it at that. [Tentative release date is Sept. 2009.]

New Times You must have some pretty amazing acting chops. Has acting always been a part of your repertoire?

Zany I’ve done dinner theater but I just eat dinner and watch theater. You asked me if I made out with Matt Damon and now you want me to be serious?

Zany I was on an episode of Roseanne I delivered her baby.

New Times Oh my god, I just saw that episode! In the flashback scene? I love Roseanne—the early seasons are the best.

Zany Yeah, I played a doctor [on Roseanne], a bartender, an attorney [not on Roseanne].& I have been on the Drew Carey Show.

New Times What is “fix the joke”?

Zany Instead of having babies, I get jokes fixed. People write new punch lines for my jokes when I do my Zany Report with Bob and Tom. It’s quite popular.

New Times Give me an example.

Zany Last week there was a train that sprayed herbicide on some train tracks and accidentally hit& a bunch of kids and I said, “Luckily no kids were hurt but all of their pot was ruined.” Then the fix-it guy wrote, “Nobody was hurt except Herb.” I thought it was funny.

New Times I have no idea what you just said. But seriously Bob, when is the last time that you cried?

Zany I think when I hang up here.

Comedian Bob Zany is about to jump off the cliffs of Shell Beach, yet again. Don’t miss his Zany Traditional Thanksgiving stand-up comedy show at The Spyglass Inn, lounge, and restaurant Nov. 28-29. Shows are Friday at 8 p.m. and Saturday at 7 and 9 p.m. 2703 Spyglass Drive. Get there early to see the sunset from the best view in town. Tickets are $15. Info: www.bobzany.com or 773-1222.