Zen Mountain Poets stop at The Siren on Nov. 30, their last stop of a national tour

They might call their music "psychedelic neo-prog folk jazz" and they might list Jefferson Airplane, The Doors, Fleetwood Mac, It's a Beautiful Day, and Grateful Dead as inspiration—all things you can definitely hear in their sounds—but at heart the Zen Mountain Poets are simply a tribe of folkie singer-songwriters who don't let musical convention or expectations get in the way of creating a genre-jumping sound that's more about energy and authenticity than overly polished pop nuggets. These are organic, richly developed hippy songs, perfect for dancing barefoot in the dirt to.

If you visit their Reverb Nation page (reverbnation.com/rpk/zenmountainpoets), you'll hear tracks like the Grateful Dead-esque "Roll It Down the Line," the galloping Western song "Cuddle Up," the swirling psychedelic sounds of "Song About Us," or the bright and jazzy exploration of "Sometimes."

The local group recently took off in "The Dragon," their 1954 Greyhound tour bus, on what they're calling their "Dragon's Red Dirt Tour" that took the band from California to Florida and back, returning for a show next Thursday, Nov. 30, at Morro Bay's The Siren (9 p.m.; 21-or-older). Along the way, they continued to post live versions of their songs as they performed their shows.

"We'll be coming into The Siren with our wheels rolling in hot, straight from the road," Roselli said. "We'll be live-streaming this tour as well, and we're currently rated No. 1 statewide in Reverb Nation."

This isn't the band's first foray beyond the Central Coast, but it's definitely the farthest they've gone.

"We've toured up and down the West Coast, playing venues such as House of Blues Hollywood and Analog Theater in Portland," Saxer added. "We're known for our unique musical stylings and arrangements, vocal harmonies, and taking audiences on unforgettable auditory journeys. Zen Mountain Poets are 'who's here now' and 'who hears now,' traveling across time and space to share our music, sometimes in our tour bus, The Dragon, who is part of the band too, of course! You're also in the band when we perform; every experience making music with and for people transforms what we do, as we follow the flow of the show. Our music holds a unique sound and a moving power that enriches and contemplates life, bringing awareness to our reality living on this planet."

They've certainly come a long way from their humble beginnings in the spring of 2014 when they started jamming together.

"Our sound began to change from groove jams to more intricate synergistic styling as each member contributed their gifts to the overall sound and feel," Saxer continued. "We're all writers, and new songs are always emerging and being cultivated; we co-create all of our arrangements. We're having an incredible time playing the music we're writing, and we love to perform for our growing fan base."

Check them out next Thursday at The Siren. 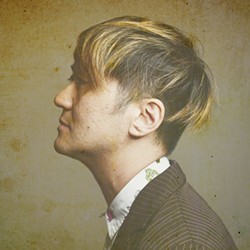 Orchestral pop violinist Kishi Bashi plays the Fremont Theater this Friday, Nov. 24 (doors at 8 p.m.; documentary at 8:30; concert at 9; all ages; $18 at eventbrite.com), with opening act Tall Tall Trees as well as a pre-concert screening of an early cut of Kishi Bashi's documentary film, Project 9066, which follows Bashi on "a dynamic musical quest to process his identity and the lessons learned from the Japanese Internment."

He's touring in support of Sonderlust, an album he says is forged through heartbreak.

"As I sat down to write songs last summer, I went to all my usual conduits of creation: violin loops, guitar, piano, and I came up with the musical equivalent of fumes," he explained in press materials. "I tried to create orchestral pop recordings that I assumed were my forte, and in turn I found myself standing in front of a creative wall of frightening heights."

Meanwhile, his personal life was in a shambles. He and his wife of 13 years were struggling to keep their marriage together, mainly due to the toll of a heavy touring schedule. As a way to cope, he submerged himself in the new musical direction of Sonderlust. 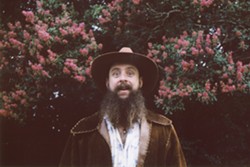 "This album is straight from my soul. I questioned everything about what it means to love and desire. The difference between loving someone and being in love," Bashi revealed.

After the documentary screening, Tall Tall Trees will begin the concert. Banjoist Mike Savino reminds listeners that his instrument "is, at root, a drum. Coupled with his mastery of electronic effects, loops, toy ray guns, and heaps of spontaneous creativity, Tall Tall Trees has been encapsulating audience members worldwide with his mystifying solo shows," according to his bio.

This promises to be an unusual evening of music and film.

Get your holiday cheer on!

In 2003, Will Ferrell starred in Elf, about a man who grows up at the North Pole and believes he's one of Santa's elves. When he learns the truth and finally makes his way to NYC to find his real father, poignant comedy ensues. The film was an instant classic, and so it naturally spawned Elf—The Musical, which is coming to the Performing Arts Center in SLO this Wednesday, Nov. 29 (7 p.m.; all ages; $65 to $95 at calpolyarts.org or (805) 756-4849).

In the musical, Buddy is "a young orphan child who mistakenly crawls into Santa's bag of gifts and is transported back to the North Pole. Unaware that he is actually human, Buddy's enormous size and poor toy-making abilities cause him to face the truth. With Santa's permission, Buddy embarks on a journey to New York City to find his birth father, discover his true identity, and help New York remember the true meaning of Christmas."

A free pre-show lecture will be held at the PAC Pavilion, 6 p.m., led by PCPA director/actor Erik Stein. 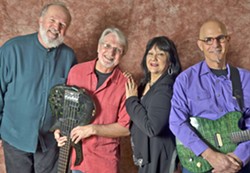 Students and teachers of the Central Coast Jazz Institute perform the music of Richard Rogers and Lorenz Hart this Sunday, Nov. 26, at Unity Concert Hall (3 p.m.; all ages; $20 donation requested; reservations at charlie@talsanmusic.com or (805) 927-0179). Led by famed West Coast vibraphonist Charlie Shoemake, the shows will feature songs such as "The Lady Is A Tramp," "With A Song In My Heart," "Where Or When," "My Funny Valentine," and many more. 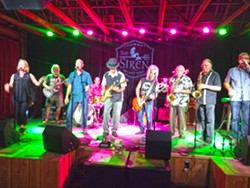 Ted Waterhouse loves to play music and loves to bring local musicians together to join in. "The Real Blues Jam (SouthWest) is now officially a regular monthly event at The Siren in Morro Bay, the next installment being Tuesday, Nov. 28 (7 to 10 p.m.;21-and-older; free), and continuing on the fourth Tuesday of each month," Waterhouse said. In addition to Waterhouse on slide guitar and vocals, the night features Bruce Willard on bass and Dean Giles on drums, and they welcome "all blues jammers regardless of experience as well as dancers and blues fans of all stripes." Meanwhile the Real Blues Jam (North) happens every Thursday at D'Anbino's. "They're both great rooms with great sound. Ya gotta love it," Waterhouse added.

Americana soul group Eric Morrison & the Mysteries plays the Frog and Peach on Tuesday, Nov. 28 (10 p.m.; 21-and-older; free). They're touring in support of their debut album No Wolves, which debuted on the roots rock charts at No. 32, and its single "Bad Girl" rose to No. 5. Δ