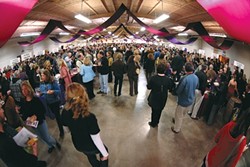 When it comes to Zinfandel, Paso Robles is your source for every style of Zin you crave. Described in Vines, Grapes & Wines by author Jancis Robinson as “California’s very own European variety … it’s thrilling because of the potential quality of the wine made from it.” When grown in Paso Robles, this California favorite varies widely in style, ranging from elegant and refreshing to ripe and bold, and all that’s in between. Most consumers don’t treat Zinfandel with the same respect they hold for Cabernet Sauvignon, Pinot Noir, or Syrah, but Paso Robles’ Zinfandels can be beautifully crafted.

I’m always amazed at meeting people who think Zinfandel is “white.” Undoubtedly, Zinfandel’s association with “white zinfandel,” a very sweet blush wine, gave the classic variety a bad name. The finest Zinfandels only come in red and I love them; that’s why I highly recommend the upcoming Paso Robles Zinfandel Festival, taking place March 20 through March 22. This series featuring educational tastings, winemakers’ dinners, and auctions will help you find the style of Zinfandel that rocks your world. Of course, white zinfandel lovers might discover they like it both ways, white and red.

As usual, Zin Fest offers myriad open house parties at the wineries: you can ride the steam train at the historic Santa Margarita Ranch, experience a sensory analysis seminar at EOS, and attend the Sunday Cajun brunch with rockin’ zydeco at Peachy Canyon. You’ll find details about every Zinfandel event and tasting, plus maps on the Paso Robles Wine Country Alliance (PRWCA) informative website, pasowine.com.

The fun never stops, but it’s also an excellent opportunity to learn more about this intriguing variety. Within the Paso Robles American Viticultural Area (AVA), Cabernet Sauvignon, and Merlot are the most widely planted varieties with Zinfandel in third place at 1,844 acres and Syrah close behind with 1,832 acres, according to the PRWCA. I called on a few Paso Robles winemakers I respect to discuss Zinfandel’s myriad styles, influenced by the vineyard’s location within the Paso Robles AVA.

Josh Beckett, Peachy Canyon winemaker and older son of founder Doug Beckett, agreed there are huge extremes between their various Zinfandel vineyards: “Our Old Schoolhouse in the cool Templeton Gap region is much more elegant, with concentrated fruit flavors on the palate. Snow, in the hotter northwest corner of Paso, is bigger, spicier, and ripens much faster.” The latter vineyard has 30-year old vines and 10-year old vines planted next to each other with the same clones, yet the grapes are dramatically different.

“The older Zin has more earth, mushrooms, and rounder flavors, while the young vines taste youthful, with fresh strawberries. They’re great for blending with Zinfandel that’s too ripe. We’re working with U.C. Davis on the Zinfandel Heritage Program to see which grapes do better here versus Napa or Sonoma. It’s something I want people to get excited about.”

I love seeing local winemakers produce great bargain-priced wines, like winemaker Mike Sinor at Ancient Peaks in Santa Margarita. He earned a whopping 93-point score for his $16 Zinfandel from Santa Margarita Ranch. No Zinfandel at this low-price point had earned such a high rating from Wine Spectator until then (I researched it on the magazine’s website, which has limited free access without a subscription). Only one Paso Robles Zinfandel had scored higher: Linne Calodo for the 2006 Problem Child, $48, which earned 95 points; last month Four Vines 2006 Biker, $25, earned 92 points.

“Santa Margarita Ranch is in a cooler climate so we have longer hang-time with better fruit development,” Sinor explained of the vineyard where they grow Ancient Peaks Zinfandel. “We’ve zeroed in on our best blocks in the vineyard from three distinctive areas. Our Zinfandel has spice and pepper qualities but it’s not sweet, it’s a refreshing, leaner style.”

From the beginning, with the ’05s he noted, they could tell the Zinfandel would be very interesting. They also sell it to Four Vines, Robert Hall, EOS, and Rosenblum wineries. The latter supplied Zin cuttings from their famous Rockpile Vineyard in the southwestern corner of Sonoma. “Rockpile” is now an official AVA. Sinor believes many people visit Paso Robles with Zinfandel in mind. Although his company is expanding the vineyards, they’re not focused on any single variety. Paso Robles is no one-trick-pony, he explained—it’s too large geographically for that. And over the past five years, Syrah received far more critical acclaim than Zinfandel or Cabernet Sauvignon.

EOS winemaker Nathan Carlson, formerly at Claiborne & Churchill and Tolosa in Edna Valley, moved to Paso 10 months ago. He had little experience with Zinfandel but admits it has much in common with Pinot Noir. “Zinfandel is the hardest variety I’ve dealt with. It doesn’t behave like other varieties; it flowers over a long period, and sets fruit and ripens differently,” Carlson explained. “I learned from last year’s experience.”

We tasted through six unique barrel samples, each from a different vineyard. Carlson explained he looks for characteristics he wants from the Zinfandel each year, and the vineyards are managed to achieve the desired results. For instance, at the estate Brothers Ranch Vineyard the Zin vines are young so they’re leaf-thinned for additional sun exposure. At French Camp, a production-driven site, EOS gets good quality fruit through attention to detail throughout the growing season. Lover Boy Vineyard, owned by Randy Phillips of Red Soles Winery, said Carlson, “is a great example of why winemakers love working with growers who make their own wine.” Like an artist’s palette, Carlson selects lots from each vineyard to create a blend that’s the ultimate EOS Zinfandel.

You can taste the awesome Zinfandels from these producers and many more great wineries at the three-day Zinfandel Festival. There you’re sure to find many Zins worthy of critical acclaim.