A previously unknown and highly contagious mutant bacteria was recently identified, and when contracted by humans, its terrifying symptoms are deadly.

First it's the typical flu-like symptoms. Then the cellular necrosis sets in, causing skin to develop what looks like gangrene and damaging the nervous system. Slowly, those infected develop an insatiable appetite for human flesh. 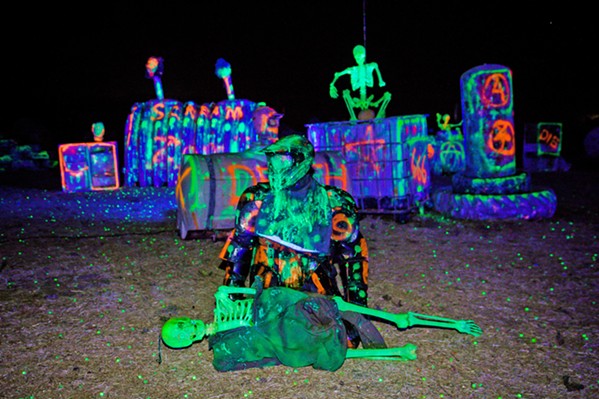 The bacteria has spread to SLO County, and zombies are taking over. Their main stronghold is the Gladiator Paintball Park, where they're hiding and attempting to eat the good citizens of San Luis Obispo. Only you—and several rounds of glow-in-the-dark paintballs—can stop this devastation.

This is the third consecutive year that zombies are taking over at Gladiator Paintball Park in October, but hosting the event is a first for the park's new owners, husband-and-wife duo Bobby Poole and Tracey Edwards.

A paintball park might seem like an odd purchase for the parents of four daughters with other full-time jobs. But Poole and his youngest daughter attended the park's Zombie Hunt last October, and they had a blast pretending to murder fake zombies together. Poole loved that the park offered an activity that a grown man and his then 12-year-old daughter could do together.

So when he saw that the 10-acre paintball park was up for sale, it caught his attention. As a real estate agent by day, Poole's whole career revolves around marketing, and he noticed that in Gladiator's 15 years of operation, its past owners had never really felt the need to do much in that realm.

It took some convincing, but Poole's wife eventually agreed to the plan, and the couple bought the park in February with the hopes of increasing the park's revenue. Then just six weeks after Poole and Edwards opened the park, the real horror show hit: COVID-19.

The park was shuttered for about two months after that. But Gladiator Paintball is now up and running with safety precautions in place.

"I take that stuff very seriously," Poole said, adding that his wife is a nurse at Marian Regional Medical Center.

Now the strategy, Poole said, is more about bringing in enough business to stay safe and afloat. There's room for 22 people in every Zombie Hunt group, and each group gets about 30 minutes to tag those monsters. The hunts start at 7 p.m. and is run every 30 minutes until 10 p.m. each Friday and Saturday in October.

"I am being very cautious about how I put out [information about] what we're doing now," he said, later adding, "If you're concerned about it, don't come out."

COVID-19 has forced Poole and Edwards to make unexpected and difficult decisions about health, safety, and financial stability. And going forward, Poole feels confident that what he's offering is safe for everyone involved. Plus, he said, families in San Luis Obispo need something fun to do together in the outdoors now more than ever.

"The first rule: Have fun," Poole said. "Take a few minutes away from all this craziness that's going on in this freaking world."

But a warning—Poole said the Zombie Hunt is not some kind of Walt Disney, cutesy haunted house for kids. Attendees walk through a big, dark maze and multiple haunted houses, all of which are overflowing with zombies and other ghosts and ghouls.

Last October, Poole's daughter actually peed her pants while slaughtering the living dead. Now it's Poole's goal to get at least one person in every group to pee out of fear. Laughter would admittedly get the same results though.

"This is, 'Welcome to your worst nightmare' Zombie Hunt," he said.