Glen Set a few years after the original, this sequel finds America still overrun by zombies. Our four seasoned protagonists have gotten so good at killing zombies that they've even developed a taxonomy: Homers are the slow, easy-to-kill dimwitted zombies; Ninjas are the crafty zombies that can sneak up on you; and Hawkings are the super-smart zombies that are hard to evade. To spice things up, there's a new kind of zombie, the T-800, a relentless, hard-to-kill zombie. The four are living in the White House, but they're feeling restless, especially Little Rock, who's tired of Tallahassee's mothering and wants to meet someone her own age. Even Columbus and Wichita's romance is becoming strained. Naturally, change is in the air. What follows is something of a road movie, albeit one populated by flesh-eating monsters and other survivors. Filled with the same pithy dialogue and gore of the original, Double Tap ups the ante with a bunch of new characters, a trip to Graceland, the search for a hippie utopia called Babylon, and a spectacular conclusion ... that then gets even better during the credits with a flashback to the first day of the zombie apocalypse. The whole affair is a hoot!

Anna Double Tap is a whole lot of fun in a world jam packed with zombies, just like the first Zombieland. The crew has done well sticking together, but the monotony of day-to-day living is getting to them. Time for an adventure through the zombie-strewn wasteland of America! I've watched the first Zombieland countless times—something about that formula of humor and gore just calls to me—and I wasn't disappointed with the follow-up. The same characters are there but they are also changed, after all it's been a few years and they've all had some growing up to do—Little Rock especially. The young girl from the first film is now a young woman, one who feels cut off from her peers and lonely despite her constant companions. Harrelson is his usual awesome self as Tallahassee, in love with his big-ass truck and super overprotective of the young girl he helped raise. Wichita feels stifled by Columbus and soon takes off with her sister in a fly-by-night escape, leaving the two men in the dust. When Little Rock hooks up along the way with Berkeley, a hippie dude, the whole crew is back together in search of her along with Columbus' new side piece, Madison, a ditzy blonde clad in all pink who has survived by living in a freezer at the mall. You can just imagine how much the rest of the crew loves their new tagalong friend. This movie is a whole lot of fun, and I have to agree the ending took the movie from good to great. 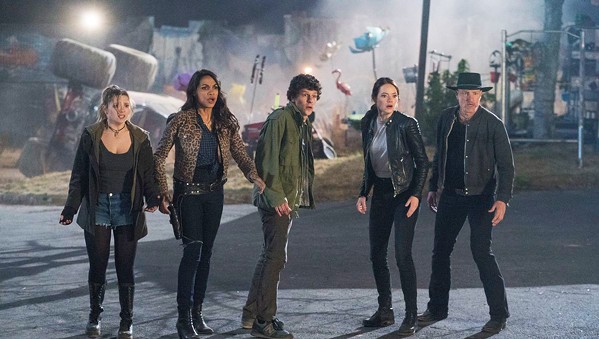 Glen One of the running gags in the Zombieland reality is that you can take whatever you want. We see Van Gogh paintings hanging on the wall; when Columbus asks Wichita to marry him, he proposes with the Hope Diamond; and when they arrive at Graceland and see it fallen to ruin, they discover that Nevada (Dawson) has decorated her house with everything from the King's blue suede shoes to his white jumpsuit. Dawson is a terrific addition to the cast. She's a badass and just the kind of larger-than-life woman to attract the larger-than-life Tallahassee. Yes, of course Harrelson dons the jumpsuit! You can tell the whole cast is having fun making this film. Of course, this is a minor entertainment. It's not trying to outdo the original, just recapture its magic. It's just a breezy, gag-filled romp. Quintessential dumb blonde, Madison, is the butt of a lot of jokes, but even she has a little character arc as she learns to use sarcasm. Little Rock realizes that Berkeley is a poser and that she's much too tough for him. All the main characters, who spend this sequel searching for a home to call their own, eventually realize that their home can be found in one another. It's not exactly profound, but it is sweet. Mostly, Double Tap is fun, and sometimes that's all you need out of a movie.

Anna Exactly, this franchise doesn't take itself too seriously and that's half the fun. The writers seem to know the first film can't be outdone by the follow-up, and that's OK. Don't take it all too seriously, and you'll have fun re-entering this world with the cast of characters we met a decade ago. The final battle for Babylon is epic, but the real treat happens just as you think the film is over. Don't hop up from your seat early! Double Tap is a joyous ride, and I'm betting if you loved the first one as much as I did, any excuse to re-enter their world is welcome. There's a great scene where two doppelgangers played by Luke Wilson and Thomas Middleditch confront Tallahassee and Columbus. It had me giggling like crazy. Dawson is awesome as the badass motel baroness, and Zoey Deutch pulls off airhead Madison perfectly. There's just a lot of fun to be had here. It's definitely worth a trip to the theater. Δ