Zoned out: Can SLO County come up with a solution that allows Sunny Acres to house more people?

Shadows stretch across Dan DeVaul’s face, shading his eyes from the sun as he gestures to the walls that make up the building under construction to his right.

It’s huge, 8,000 square feet sprawled out in the shape of a C on DeVaul’s property—also known as Sunny Acres, a nonprofit sober living facility that supports and rehabilitates those who don’t have anywhere else to go—along Los Osos Valley Road. In front of him is the ranch house he’s known his whole life. Behind the chipped paint and green window trim is a home alive with people. They walk in and out of the side door, which leads to the kitchen. Inside, some are grating cheese for lunch. Outside, a couple of guys are repairing an old tractor while others are digging a trench for a sewer line. 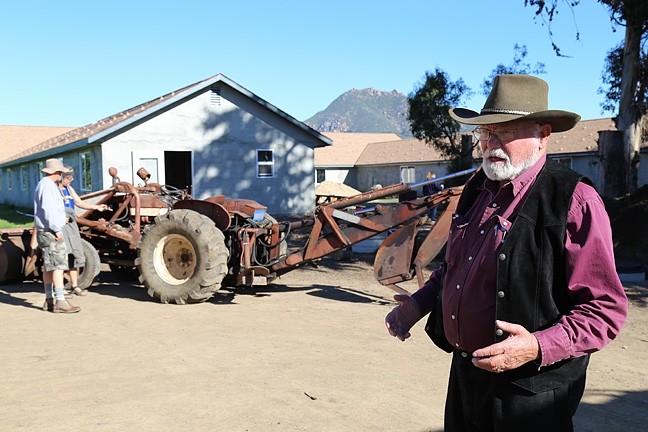 The ranch house is pint-sized compared to what’s being built, and yet, DeVaul says more people are living in the ranch house than the county will allow to reside in the dormitory being built. About 40 formerly homeless individuals live on the property. And because the property is agriculturally zoned, the county will only allow 16 people to live in the building Sunny Acres was permitted to start constructing more than a year ago.

“If the [San Luis Obispo] County Board of Supervisors wanted Sunny Acres to excel 15 years ago, just think of what it would be. They can find a way to make it legal,” he says, raising his voice at first, and then laughing. “Thank God the county let us do this, and here I am, still bitching.”

Although Sunny Acres incorporated as a 501(c)3 nonprofit about 15 years ago, its saga stretches back at least 20 to 25 years. And the way DeVaul tells it, fighting the county has consistently held the facility back. That history can be a little disjointed and hard to follow, but essentially, the county’s always had an issue with the number of people DeVaul’s tried to house on his property. Not being compliant with county codes is No. 1 on that list of grievances.

However, on Feb. 2, the Board of Supervisors declared a homeless shelter crisis, and Sunny Acres’ capacity to house people came up as one of the potential solutions to the county’s sheltering woes. During that meeting, with 5th District Supervisor Debbie Arnold leading the charge, the board directed staff to look into what it would take to legally enable the sober living facility to house more people.

The newest building on the Sunny Acres property faces several other incarnations of what DeVaul’s tried to use as housing for people trying to get off the streets.

There’s a large stucco-walled building he calls the barn. He says as soon as it was built, the county red-flagged it and forced him to tear apart anything remotely resembling a living space and kick out all the people. There are also the black walls of several “cottages” in between that barn and the shop. Those were a no-go as well. At one point, the property contained several RVs and trailers that people were living in. The county didn’t like that either.

“We’ve spent way too much time defending ourselves,” DeVaul says, lamenting the trials Sunny Acres has been through just to try and get people out of the creek beds.

He says it shouldn’t be this hard. There should be some middle ground that helps people get back on their feet. The options shouldn’t be: creek bed or incorporated into a residential community.

He readily admits that the program isn’t for everyone. People living at Sunny Acres need to dedicate themselves to being sober and contributing to the community on the ranch. But he also says the nonprofit is willing to take on those who don’t readily fit in with the county’s social programs, and he works with organizations like Transitions Mental Health Association and the SLO County Probation Department to give a home to those who wouldn’t otherwise have one.

One of the success stories is the nonprofit’s newest program director, John Stafford. He’s a lanky dude with a white handlebar moustache, and he’s got plans—adding that if it weren’t for DeVaul, he’d probably be in jail again.

“Dan’s a good guy. If it wasn’t for him, a lot of these people would be out on the streets,” Stafford says. “The program’s worked for me. I’ve learned that you can get what you need here.

“I’m probably the happiest that I’ve ever been as an adult.”

Stafford’s sitting outside the kitchen in the ranch house, and the smell of grilled cheese is wafting through the open door. He once worked as a Kern County Sheriff’s deputy. He once was a Bakersfield police officer. He’s also done several stints in prison, and he attributes that time to drinking and drugs. He says the last 20 years of his life have been a battle.

Every time he got out of prison, there was no consistent help, no consistent place to go but back to prison, most recently Tehachapi State Prison.

“I knew I needed to break the cycle,” he says.

While he was in Tehachapi, he wrote to several programs looking for the help he thought he needed.

“Dan wrote me back and said, ‘The night you get out, I’ll have a place for you to stay,’” Stafford explains. “He picked me up in the middle of the night from the train station.”

He believes in Sunny Acres and what it can do for people. In 2015, the facility provided 33,000 meals for people and provided the equivalent of 11,000 bed nights; 104 people rolled through the program last year.

He says he’s working on a transitional program right now, to help get people back into society after 90 to 120 days of sobriety on the ranch—setting up housing options and support with job searches.

Stafford’s goal is to continue on with Sunny Acres as the program director and eventually to take over DeVaul’s role.

“There’s a huge future here. I know there are hurdles for us, but by going about things the right way, like we are doing, it’ll come together. It’ll happen,” he says. “It’s just time to turn the page on the past. This could be a huge benefit to San Luis Obispo.”

Vice Chair of the Sunny Acres Board of Directors Thom Brajkovich, who also owns Paragon Design (the architecture firm that designed the building under construction), said the discussion that led to SLO County declaring a shelter crisis could be the opening that the nonprofit needs.

He thinks the 14-bedroom dorm-style residence with a large community dining room and kitchen could comfortably house 50 to 60 people. The bedrooms are huge, 300- to 400-square-feet apiece.

Brajkovich spoke in favor of the crisis declaration at the Feb. 2 meeting alongside several fellow board members. All of them encouraged the county to figure something out that would give Sunny Acres the ability to house more folks.

Supervisor Arnold met with Sunny Acres board members in the week following that meeting. She told New Times there has to be a way to make it happen.

“[DeVaul’s] been trying for many, many years to provide some shelter for people who are very in need,” Arnold said. “He’s working still to provide the shelter that meets [the county’s] standards, and he’s going to need our help.”

Few landowners are willing to dedicate their property to housing the homeless, but DeVaul is, she said. Solutions to the agricultural zoning problem could include a conditional use permit or a zoning change of some sort, she said, adding that county planners have a meeting set up with the nonprofit at the end of February.