Zoo to You offers a hands-on exotic animal experience 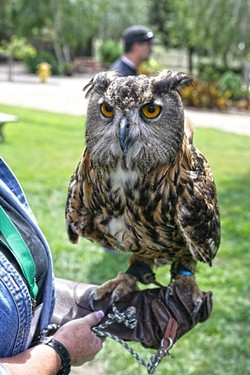 “I respect its privacy too much to ask,” he quipps, before coming clean. “Spike is a male American alligator, the kind you’d see if you were golfing in Florida. … The story I heard is he was rescued when he was working as a ‘guard dog’ at an illegal drug operation in Southern California. We rehabilitated him and gave him a chance to earn an honest living.”

Scott, a firefighter by trade and now the fire chief at Diablo Canyon Nuclear Power Plant, has volunteered at Zoo to You for a decade, and the operation itself has had Spike for 18 years. With proper care, he could live to 30.

“Alligators can go five or six months without food,” Scott explains. “They live off their fat stores, slow their metabolism, and wait for the food to come back. Unlike a crocodile that will pursue prey, an alligator might lunge once or twice, but if he doesn’t get it he’ll give up. We feed him a chicken once a month, and it takes about three weeks to work through his system.”

This is the sort of insight you get from Zoo to You, not to mention hands-on interaction. When’s the last time you got to touch an alligator in a zoo? 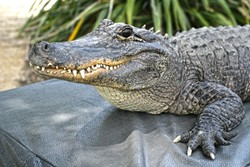 “We provide opportunities for people to make a connection with these animals,” Scott says. “Their counterparts in the wild really need humans to make smarter decisions, and getting to know these animals firsthand is a step in the right direction.”

Scott’s wife, Su Ellis, is standing nearby, introducing visitors to Roswell, a three-banded armadillo. She directs me to roll the tennis ball in his enclosure, and when I do, he scuttles after it and jumps on top, completely covering it. When I reach down to touch Roswell’s shell, he jumps up a little, startling me.

“Insects and mealworms,” she says, shaking a couple dried worms near him. “He prefers the live ones but
I prefer the dry ones, and I get to pick,” she jokes.

Su picks up Roswell and shows me his underside. It’s a view of an armadillo I’ve never had before and another reminder that Zoo to You’s hands-on experience is different from a traditional zoo.

“We’d love it if all animals could be in the wild,” Su says, “but we’re running out of wild.”

Next, I meet Pam McLean, who’s wearing a falconry glove with a huge owl on it. It’s also got a cord running from the owl’s impressive talons to the glove, which is good, because the owl, named Zophia, decides it wants to fly off, and Pam has to bring it back in. Zophia is fierce and beautiful looking, and as I run my hand down her feathers, I’m amazed at how soft she is.

Pam, a volunteer for the last five years, got involved with Zoo to You to help lessen the stress of her job as an EMT with San Luis Ambulance. She was drawn to the hands-on experience, but I can’t help but ask, after watching Zophia fly off in a start, whether Pam’s ever worried about being attacked. 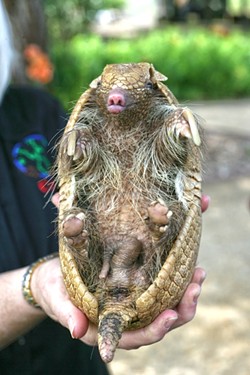 “The way we work with them, we hope not, but we always remember they’re wild animals,” she says.

Diane Dieterich is walking Morocco, an African Crested Porcupine, and she’s explaining that despite thoughts to the contrary, porcupines cannot shoot their quills out.

“That only happens in cartoons and it’s a myth, but a porcupine can kill a lion,” says Diane. “If the quills get in its face, they can’t get them out, and the lion can die of infection.”

How do you know when it’s time to get out of the way?

“He’ll rattle his quills and it will sound like a rattlesnake, and he’ll stomp his feet,” says the massage therapist by day and exotic animal wrangler in her spare time.

For the record, I petted Morocco, but per Diane’s directions, only front to back. She also invited me to massage his “greasy, smelly ears,” but I declined.

Just when I thought I’d seen all the animals I was going to see, Pam and Diane return from their Zoo to You truck with a fellow named Julius Squeezer, a 100-pount Burmese python, which they set on the grass.

“I loved your work in Jungle Book,” I say, but he seems more interested in the little boy petting his tail. Snakes. So rude.