May 10, 2021
27 comments
A neighboring county’s sheriff’s association says it’s upset about the removal of a “Blue Lives Matter” flag from the Paso Robles Public Safety Center over the May 1 weekend. 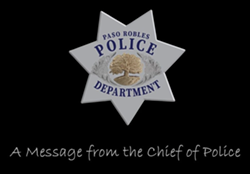 In a Facebook post, the Kings County Deputy Sheriff’s Association said it was disappointed with Paso Robles Police Chief Ty Lewis's explanation for why he took down an “American thin blue line flag” that a resident put up outside the police station.

“The constant caving to the ‘woke’ cancel culture sweeping across America is promoting lawlessness and fueling negativity toward our beloved law enforcement,” the post read. “The Kings County Deputy Sheriff’s Association sends their support and admiration to the brave men and women at the Paso Robles Police Department. Now more than ever before we need our leaders to stand tall and support those of us who risk our lives.”

In the post’s comments, PRotect Paso founder Brandon Stier thanked the association for its post and said it was his event and group that put the flag up. The PRotect Paso Facebook group describes itself as a network of “patriots” with the goal of protecting the city’s businesses, community, and supporting local police.

PRotect Paso attached a “thin blue line” flag to a light post near the corner of 10th and Park Streets in addition to American flags, blue ribbons, and other decorations on gates, light poles, and other public property surrounding the Public Safety Center in support of the police department.

Lewis addressed the decision to remove the flag on the Paso Robles Police Department’s Facebook page.

Shortly after the flag was installed, Lewis said he was forwarded a complaint sent to the city by a concerned citizen. The complaint cited concerns that the flag was controversial and divisive and requested the flag be removed immediately.

“I am aware that the symbolism of thin blue line flags is viewed differently by many. Some view it as a symbol of law enforcement support, while others view it as a racist and divisive symbol. I leave it to each community member to research this controversial topic and form their own opinions. With that said, in an attempt to avoid any controversy and preserve public trust, I ordered the flag be removed from the light pole,” the post stated.

After the flag’s removal, Facebook users began rumors that the flag was stolen. Lewis said that he was responsible for removing the flag and called on community members to cease from the “unproductive and negative conversations on social media.”

By taking the flag down, Lewis said he wants the Paso Robles community to know he respects the differing views out there.

“Various community members have relayed their frustration with police because they often feel their voice isn’t heard or acknowledged. They feel marginalized at best and unsafe at worse. My job is to peaceably solve problems whenever possible and to build trust. I love Paso Robles, there is strong and broad public support for us, but there are those who don’t trust us. They don’t trust me. Ignoring those viewpoints of people with real fears doesn’t help me create a stronger, safer, or more trusted police department and community,” he said.

As a leader in the community, Lewis said he believes his job is to bring people together through respect of differing opinions and providing an opportunity to build trust—which he’s finding out isn’t easy.

Lewis also noted that the Paso Public Safety Center is not a symbol of any political view or agenda; it should be professional, unbiased, and provide a safe place for anyone’s voice to be heard. His decision to remove the flag doesn’t mean he doesn’t support his officers or the law enforcement profession. Lewis said he supports and respects the individuals who fly the thin blue line flag and those who might view the flag as divisive.

“I hope they learn the importance of civility. I hope they learn that I am committed to transparency, unbiased policing, providing a voice to everyone, that I listen, that I will always strive to make decisions in the public’s best interest. Even when it opens me to criticism,” he said. “Lastly, I hope they understand that policing is an honorable profession and the city of Paso Robles is home to the best officers anywhere.” ∆